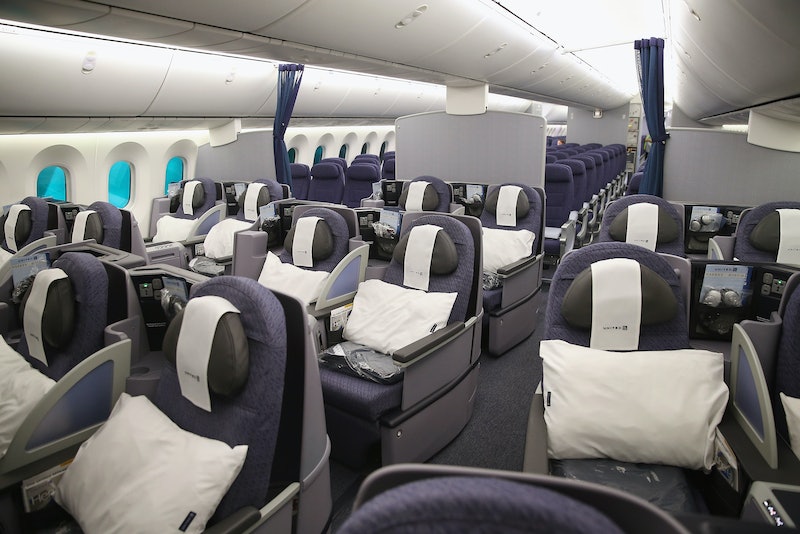 In case you needed another reason to avoid the environmental deathtrap that is the modern airplane, new research has found that severe strains of E.Coli and MRSA can last for days on a plane — yes, days. And not just in the toilet (which, let's face it, everyone should be suspicious of) or on the emergency manual. No, these literally vomit-inducing bugs can lurk for up to a week in the seat-back pockets and on armrests, and (for slightly less time) on the window-shades and the actual seats themselves. Basically, the bacteria is hard to avoid — but, actually, this is the case generally.

The study, conducted by Auburn University's Department of Biological Sciences, tested seats and seat pockets, tray tables and window shades, armrests and toilet flush handles, inoculating them with the bacteria and simulating the temperature and humidity of an airline cabin. The results were any germophobes worst nightmare: Methicillin-resistant Staphylococcus aureus (MRSA) loved the seat-back pockets, surviving for as long as 168 hours. And a certain strain of E.Coli — one which causes diarrhea, cramps and puking, but not the one that's super-resistant to antibiotics — could live for as long as 96 hours on an armrest.

"Our data show that both of these bacteria can survive for days on these surfaces, particularly the porous material such as armrests and seat-pockets," said Kiril Vaglenov, who led the research, in a statement. "Air travelers should be aware of the risk of catching or spreading a disease to other passengers and practice good personal hygiene."

“The take-home message is be careful about your hand hygiene and don’t travel while contagious or immune compromised,” Vaglenov added.

Airplanes are general hotbeds of illness and infection: the low-humidity on an airplane is beloved by viruses, and high altitudes make people tired and weaken their immune system. Some research as shown that the risk of getting a cold is 20 percent higher when traveling on a plane. But before panic-cancelling your summer holidays, let's keep in mind that these bugs thrive in all sorts of common places that we often ignore.

Kitchen cutting boards and hospital cutting boards are E.Coli favorites, as are the latex gloves that cooks use in hospitals. Cellphones can carry 18 times more bacteria (including E.Coli) than a toilet, while an office desk has 400 times more germs than a toilet boil. As for drug-resistant MRSA, roughly 2 percent of people carry it without knowing — but it's also "endemic" in U.S. homes.

So maybe it's not quite so horrifying that plans have these bacteria (either that, or you're now frantically rubbing disinfectant over anything and everything). Comfortingly, though, the Auburn study didn't look at the airlines' cleaning protocols; so there's a chance a lot of that bacteria wouldn't even survive the clean the plane is given in-between passengers. "The point of this study is not to be alarmist, but to point out to the airlines the importance of providing a sanitary environment for travelers," said Professor Jim Barbaree, director of the study.

Still not feeling secure? Keep in mind that research is always coming up with answers: recently, scientists at Purdue may have developed a combination of viruses that can kill almost all E. coli in food. Better than nothing.

More like this
Dyson Is Dropping Futuristic, Air-Purifying Headphones
By Rachel Lapidos
Celine Dion Reveals She’s Been Diagnosed With Stiff Person Syndrome
By Jake Viswanath
Serena Williams' New Line Of Topicals Is Here To Save Your Sore Muscles
By Carolyn Steber
Emily Ratajkowski Believes You Should, In Fact, Get Bangs
By Rachel Lapidos
Get Even More From Bustle — Sign Up For The Newsletter