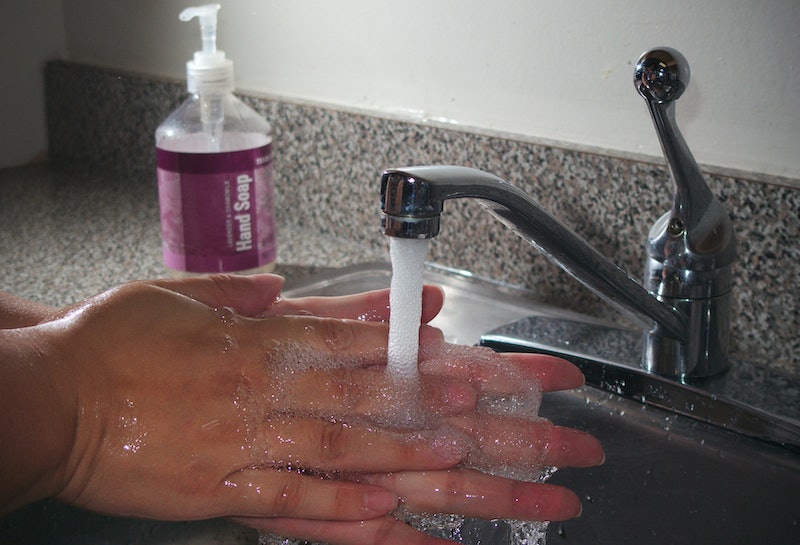 Think of all the objects you touch daily that are covered in germs: your phone, the bathroom door, that handrail grabbed by a guy that just sneezed ... please excuse us while we go get some OCD tendencies. And because we needed more to worry about, a new study from New York University’s Center for Genomics and Systems Biology adds yet another everyday item to the gross-out list: researchers identified 3,000 types of bacteria on cash money from a Manhattan bank. Germs found on the money matched those found in mouths, and even vaginas.

To be fair, that's nothing strip clubs haven't been warning us for years.

The study found that money could serve as a means of transmission, with germs linked to conditions like acne and even pneumonia. They even identified DNA on the cash from horses, dogs, and a white rhino. Jesus Christ, money. Gets around.

Still, biologists say there's no need to overreact and go switching to Pay Pal just yet. Experts explain that in order for a majority of infections to occur, an individual would need to be exposed to tens of thousands of bacteria cells, and money usually harbors only hundreds of them. Well, that's reassuring.

Still, while innumerable surfaces and objects you encounter are covered in germs, not all of them are actually bad for you. In fact, people themselves are filled with more bacterial cells than they are human cells. Imagine this pretty picture: all the bacteria living inside you could fill a half-gallon jug. Some microbes actually help our immune system, while others aid in digesting food and contribute to our genes.

So which germ infestations should have us running for the soap, and which could actually be helping to build our immune systems? Check out which germ surfaces you should — and shouldn't — worry about.

The average desk has 400 times more germs than a toilet boil, so chew on that next time you're having lunch at your desk. Keyboards used by employees who ate at their desks showed higher levels of bacterial contamination. It's especially worrisome if you share workspaces, since items such as phones and keyboards are bacteria hot spots.

You know the deal: a coworker comes down with the flu and soon everyone within a tabletop's range is sniffling and coughing. One professor of environmental microbiology says respiratory bugs and viruses can scatter through a workplace in as little as four hours. Studies also show that open office plans make cold and flu season worse, resulting in more employee sick days. Pass the wet wipes.

Contrary to popular belief, public toilets aren't the most disgusting thing in public bathrooms. Of course, germs abound on seats shared by strangers, but your skin happily serves as an effective barrier to protect against most bacteria.

You might be better off not washing your hands. Apparently, sinks in public bathrooms — you know, the ones that are supposed to help you keep CLEAN — are dirtier than the john itself.

An experiment from Dr. Mehmet Oz in his studio restroom found the toilets contained 50 germs, the stall lock contained 587, and the sink had 689 microbes.

Sweat can be sexy, but it also serves as a breeding ground for fungi and viruses. Walking barefoot around the locker room will have you leaving the gym with more than just muscles — it can also expose you to a bevy of grossness, like plantar warts and athlete's foot.

The warm and damp floor creates perfect conditions for viruses to spread. If you have even the smallest crack in your skin, guess what's getting all up in there? Steam rooms also pose a threat, especially if people are frequenting them while naked. Put that towel down!

Consider all the surfaces your fingers touch before tapping on your smartphone. Cellphones can carry 18 times more bacteria than a toilet, according to one study. One tested device was so contaminated it had 39 times the safe level of enterobacteria, which can be found in the lower intestines of humans and animals and include bugs like Salmonella.

But while microbes like E .coli and staphylococcus aureus were discovered on the phones, they were found at safe levels, with the exception of the dirtiest users. As long as people implement good hand-washing habits, the bugs on your phone aren't too dangerous of a threat. Just make sure not to share your phone too often with others, and you should be fine.

Makeup brushes, sponges, and other applicators can spread infections like crazy. It's essentially cross-contamination, with women unknowingly sending their own germs back into product containers. These are items that come into direct contact with your eyes and lips, plus any other bacteria that may be on your skin.

Where you keep your makeup also plays a role. If it's in a bathroom, damp conditions attract airborne germs. Experts say the longer you use a product, the easier it is for bacteria to get into it. One optometrist told NBC she treats one or two women each month for cosmetic-related infections.

To prevent infection, make sure you check the expiration label, as detailed by the date printed on the package. (Other cosmetics have a symbol of a jar with an open lid, number, and letter, where "M" stands for the number of months and "Y" for the years it's good for after opening.)

Sure, you know all about changing your pillowcase, but when was the last time you changed your pillow? Chances are, you haven't, and it's filled with years of germs from your face. No worries, though, since organisms found on pillows are typically harmless bacteria that live on your skin and are unlikely to give you an infection.

The fluffy conditions aren't exactly the best environment for germs to breed, since they need something to live on in order to multiply. Still, it's advisable to wash your pillowcases, and if you've got a nasty virus, it's best to switch it up or throw your pillow into the laundry before snuggling up to it again.

More like this
Dyson Is Dropping Futuristic, Air-Purifying Headphones
By Rachel Lapidos
The 5 Best Pillows For Acid Reflux, According To A Sleep Expert
By Maria Cassano
69 Great Gifts For Guys No Matter What Their Hobbies Are
By Teresa Newsome, Mia Mercado and Brittany Leitner
TikTok Is Obsessed With Dolly Parton’s Houseware Line
By Alexis Morillo
Get Even More From Bustle — Sign Up For The Newsletter