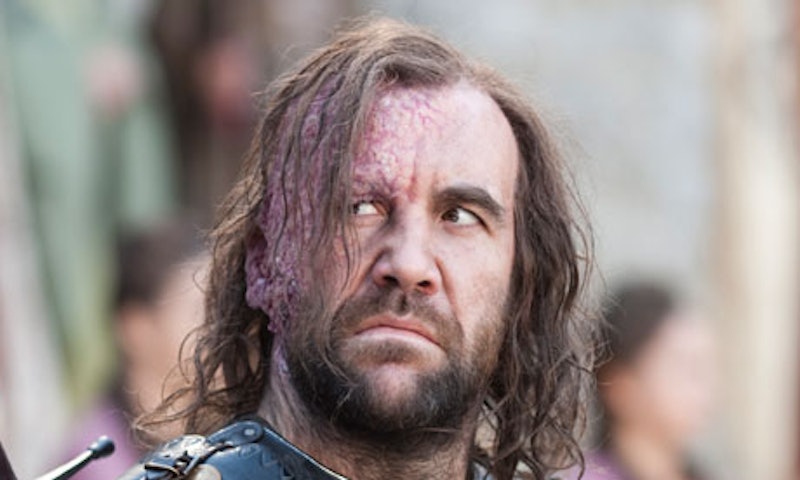 The Hound is definitely one of the best characters on Game of Thrones. He's super quotable and has reminded me how much I love chicken dinners. So here's a fact worth noting if you're a fan of The Hound: it looks like he's gone through some major visible changes: Over the past four seasons, The Hound's burn makeup has changed. Perhaps this goes along with his change of heart?

Through his traveling murderous Riverlands jamboree with Arya, we've seen a — dare I say it — softer side of him. Granted, it's still tough to say he's a fatherly figure to Arya, as slapping her down and continuing to steal has proven that he's prone to immoral transgressions, and further, a father-daughter relationship isn't exactly rooted in teaching someone how to become a merciless killer. Still, through the The Hound's actions, he's shown Arya the truth about how grim the world is, and even if their relationship has some grey areas — he's on Arya's list of folks to kill, after all — she certainly makes him feel less lonely in the world.

It's plausible that his makeup change indeed reflects this since he looks more approachable as the seasons progress, thus allowing us to empathize with him a little more.

On the other hand, his makeup change may not have to do with his character development at all; it may just be that his burn (which we learned is from his brother The Mountain when he was playing with his toys as a kid) is aging, and since he's out in the sun more, the burn is evolving.

It also may not have anything to do with the storyline; maybe it's jus a fluke. Check it out:

And while we're at it, take a look at what the actor Rory McCann looks like without all of those facial burns:

Look ma, no burns at all!