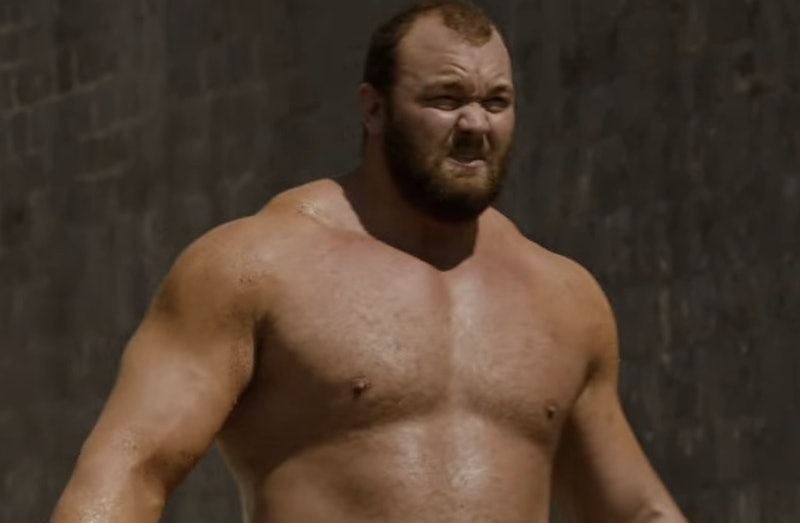 Okay, so is anyone else completely frightened by the almost-giant Gregor Clegane — aptly known as "The Mountain" — on Game of Thrones ? Because he is seriously one of the most menacing (yet oddly attractive and gentle-faced) characters ever. He might not have a melted face like The Hound (who happens to be his brother in the show), but for what he lacks in "rough" features, he makes up for in sheer size and strength. So who plays this fearless fighter? Well, funny story, he's been played by multiple actors.

The character was originally portrayed by Conan Stevens and then Ian Whyte, but now the mountainous warrior is played by Hafþór Júlíus Björnsson. (Yeah, try and say that name five times fast.) It's no wonder that Björnsson is the new Mountain — who's also known as "The Mountain That Rides" and "Tywin Lannister's Mad Dog" — since he's more well-known for being one of the strongest men in the world. Like, literally, one of the strongest men in the world. Always competing for Iceland, the 6-foot-9-inch and 419-pound man (what the what) has won numerous "Strongest Man" competitions, even coming in third place in the 2014 World's Strongest Man. Go, Mountain! But as far as his acting creds go, he really only has GoT and The World's Strongest Man TV series to his name. (Although, he is set to appear in 2014's Zon 261 as an Icelandic Viking.)

So who is he in GoT? Well, most currently, he is totally the person who has the most direct chance of getting Tyrion killed. Remember last episode why Tryion demanded a "Trial by Combat"? Well, The Mountain is going to be fighting for Tywin and Cersei. Yeah, so Tyrion better bring someone real good to the table or else he's totally going down. Because, obviously The Mountain is going to fight with every ounce of hatred he has in his gigantic body. And based on Björnsson's real life experience, we know that this fight is going to be freakin' intense. Just take a look at some of strength:

Damn. We only wish that his muscles were fighting for Tyrion and not Twyin and Cersei, because from the conversation he had with Cersei, he's ready to kill anyone. Also, check out how totally massive he is next to the queen bee. It's insane.