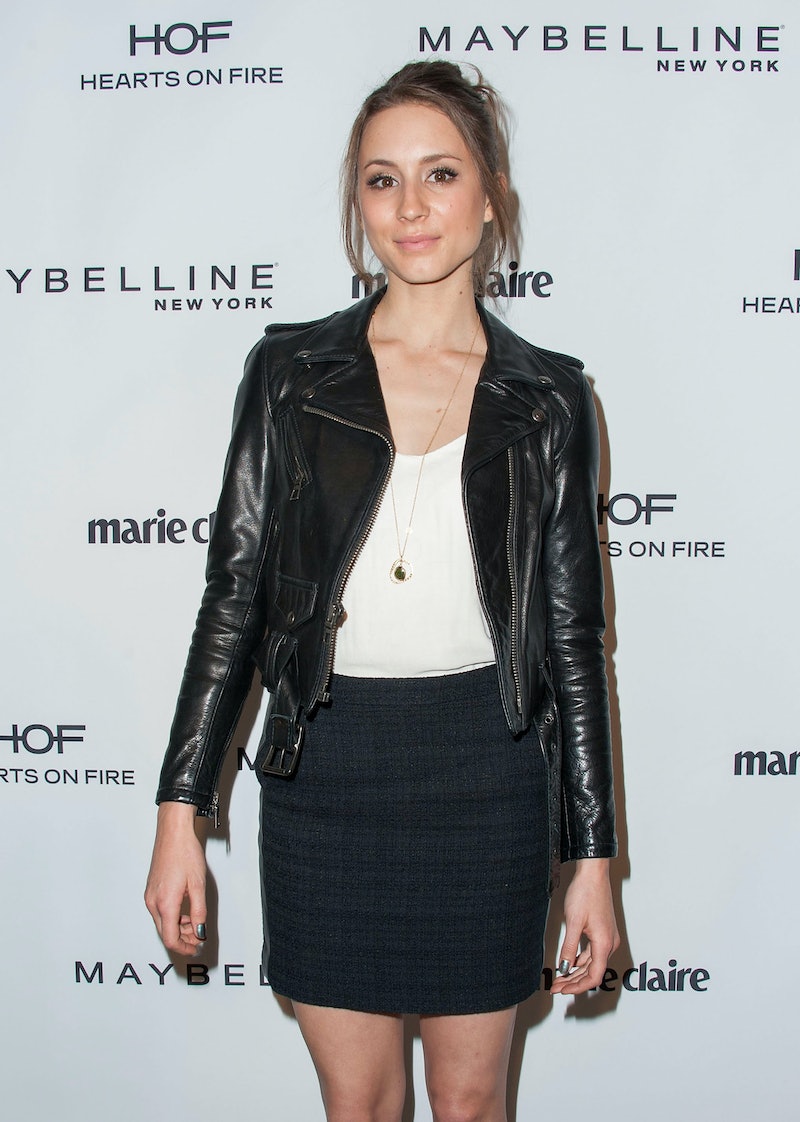 This ABC Family star really wants you to know how she feels about Photoshop. The Pretty Little Liars Season 5 premiere will air in a few weeks, but in the meantime, the cast posed for a GQ spread. And, naturally, it's causing a little bit of a stir — not because it's a little sexed-up, however. PLL's stars are under Photoshop-scrutiny yet again and on Wednesday, Troian Bellisario explained the shoot and made an important statement about body image on her Instagram.

Last December, Ashley Benson bashed a PLL Season 5 promo poster that showed the show's stars severely photoshopped. And Bellisario followed suit, reposting the photo with her own response to the retouching nightmare. So, I wasn't surprised when the 28-year-old actress took to her Instagram and attempted to explain to her fans why she and her costars were photoshopped for the GQ spread. Bellisario posted a collage of un-retouched outtake photos of herself at the shoot along with a lengthy response to the people screaming "PHOTOSHOP!" about the spread. I also wasn't surprised when she closed the post with an admirable assertion that we should embrace our flaws. Here's the collage Bellisario posted on Wednesday:

And the accompanying caption:

So by now you have seen many a shot from #GQ and many people have said that we were photoshopped... OF COURSE WE WERE! that's a very specific type of photo shoot. And looking very blown out and perfected was obviously what they were looking for. Great. Cool. As long as we acknowledge how it was achieved so we know it's not real. Here's some behind the scenes of my body the way it is and was on the day. I'm not mad at how these pictures turned out, the girls and I had an absolute blast. More fun than we've had on a photoshoot in a while, and I think you can see that in our eyes and smiles. But it's the same everywhere. It's the same way on the posters of our show and even in women's magazines. This industry seems to invest more in perfection than in flaw. But flaw and individuality, to me, are what make a human being interesting, they make our stories worth telling. (Unfortunately the flaws don't usually sell products or magazines) I'm proud of my body and the way it looks because @themarkwildman kicks my butt in aerial. But my hips and thighs are a part of me (even though they magically weren't in some shots!) I get those things from my momma. And I'm happy To shake what my momma gave me.

Again, just like when she and Benson responded to the PLL poster, it's great to see these stars that have huge access to their fans ensuring that they remain good role models. Even though Bellisario isn't bashing Photoshop outright, she's making an important statement about embracing and being proud of our bodies by embracing her own. And it's awesome that, by posting on Instagram, Bellisario is furthering an important conversation about the standard of beauty we believe makes the biggest profit.