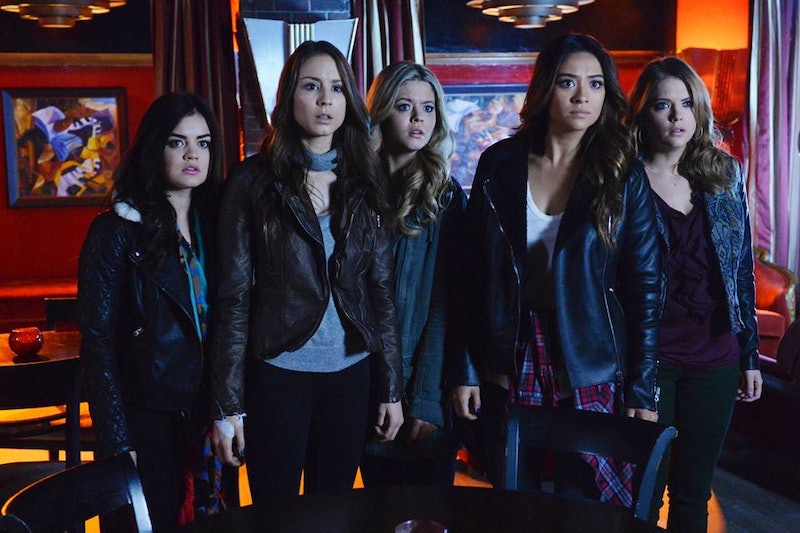 A's back, bitches — well, soon enough. ABC Family has released the first promo for Pretty Little Liars ' Season 5 and it's got all of the shock-value we've come to expect from the series. And, thankfully, it looks like showrunner I. Marlene King's spoilers for the new season weren't red herrings. I know you never stopped wondering what A's true identity really is and whether or not Ezra would die from getting shot in the Season 4 finale. But, unfortunately, you'll have to wait a little longer for one of those answers — Pretty Little Liars Season 5 won't premiere until June 10.

Now, back to that disturbing and shockingly fun promo — it looks like Ezra will live just long enough to whisper to Aria the answer to #WhoShotEzra. Whether or not he's correct, we probably won't find that out for another five seasons but who's counting, right? Other than what should be a HUGE reveal about 'A's identity, there will be a less shocking revelation that everyone is still up to their old tricks.

Alison's still doing shady shit with Mona and sneaking around behind everyone's backs. Honestly, I'm convinced that that girl actually wanted to die. And Spencer and Hanna are still a couple of badasses that aren't taking anyone's shit, especially Ali's after everything she put them through. And good for them because someone has to call her out, seeing as Emily's physically incapable and Aria's chained to Ezra's deathbed.

Oh, and you didn't think 'A' was gone for good, did you? The army of A's are coming out to play in what's sure to give all of us PLL fans nightmares for approximately 10 years. The end of the promo features a seriously disturbing scene where a bunch of masked, black-hoodied minions surround the liars in the town square. I told you, nightmare-inducing.

Not that we were doubting it, but this series definitely isn't going to go South after they reveal who A is and this promo proves it. God, I've missed PLL so much. Watch the first Season 5 promo here: