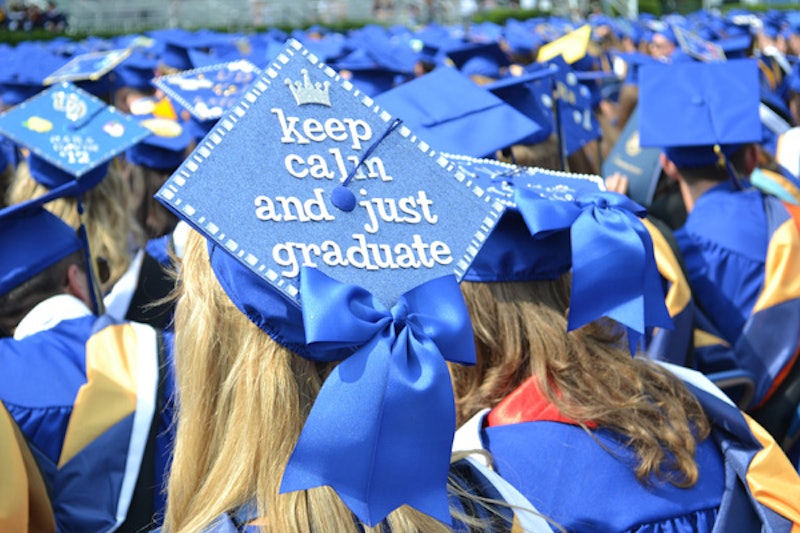 Graduation season has passed for college grads and is almost here for high school kids, which means that bizarre, barely-used words such as "tassel," "baccalaureate," and my new personal favorite, “mortarboard,” are once again worming their way back into our vernacular. Though that last term sounds like it could very well be an extreme sport or a form of medieval torture, mortarboards are actually quite harmless…fashion faux pas excluded. The flat, square caps worn by academic graduates on the day of their commencement are reminiscent of the 19th-century boards used by masons to carry mortar — hence the term “mortarboard.” You're welcome for the history lesson!

The “cap” aspect of the “cap and gown” garb worn on graduation day has become an integral part of the entire commencement experience — along with the practice of spending hours and hours adorning the caps with personal, artistic, and pop culture-inspired designs. Here are 15 of the most creative — and in some cases, truly scrumptious — bedazzled mortarboards:

This graduate of LA’s Fashion Institute of Design and Merchandising (FIDM) tells it like it is.

We’d expect no less than geometric perfection from an Arizona State University School of Engineering student.

3. Sugar, Spice, and Everything Nice

Imagine sitting behind this FIDM student during an entire commencement ceremony, your stomach growling in protest of these unfairly realistic cupcake and ice cream designs. A foodie’s definition of hell.

Now that’s more like it. This guy was definitely the most popular graduate on campus at California State University of San Marcos.

5. Jackson Pollock's At It Too

Brandy Stillwell of the University of Dakota-Lincoln channels her inner Schwarzenegger.

9. Message from the Marauders

Used in the Potterverse to magically wipe clean a coded map of Hogwarts, "Mischief Managed" is utilized by us mere Muggles as an authoritative alternative to "PEACE OUT."

Otherwise known as: That time Pixar created the best love story of all time in under five minutes.

Buzz Lightyear's iconic phrase from Toy Story took on cultural significance beyond even the scope of the overly enthusiastic space cadet's wildest imagination.

Ironically, although Peter Pan is mainly about the inability to grow up, this message from Pan himself offers a nice tidbit of quirky advice to grads looking to make their way in the world.