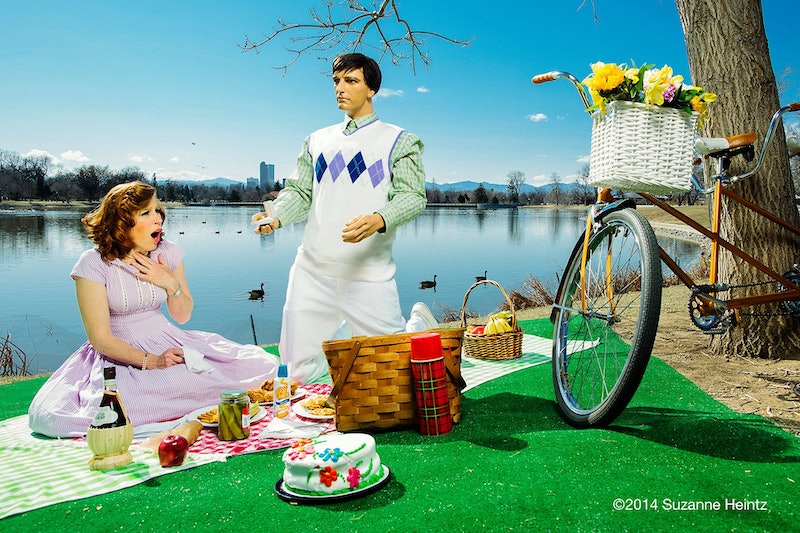 The days when women were “settled down” — that is, married with a kid or two and living the whole white picket fence idea — by the time they were in their early 20s has long since passed (sorry, Princeton Mom). But that’s still not stopping a whole lot of people for asking women “of a certain age” why they’re not married yet, even though it’s a) high time they stopped, and b) none of their damn business, anyway. That’s exactly what happened to photographer Suzanne Heintz, and like so many of us suffering from the same treatment, she was getting pretty darn sick of it. So she decided to do something about it — and that something is the stunning photo series, “The Playing House Project: Life Once Removed.”

“It came to a head one Christmas, when I was complaining to my mom about a boyfriend I’d just broken up with,” Heintz recently told the Telegraph. “She said, ‘Suzy, nobody’s perfect. You’re just going to have to pick someone if you want to settle down.’ I went through the roof. I said, ‘I can’t just make this happen Mom! It’s not like I can go out and buy a family.’”

But then she realized that she could buy a family — and make a much-needed point about the pressures of “settling down” in the process. Heintz got her hands on a couple of department store mannequins, and ever since then, she’s been capturing the “Kodak moments” that make up the image of the perfect nuclear family. She and her “husband,” Chauncey, and their “daughter,” Mary Margaret, have celebrated Christmas together:

Taken care of their chores together:

Gone on vacation together:

And suffered suburban malaise together:

But good news! In spite of their occasional troubles, Heintz and Chauncey are even renewing their vows this summer! “Life Once Removed,” you see, is also an ongoing documentary series; for the second chapter, Heintz and her plastic hubby are going to say their “I dos” all over again on June 16. The goal, of course, is to take a critical look at the process of matrimony in America.

“This is a weird time in women’s history,” Heintz wrote about the project in the Huffington Post. “Don’t get me wrong, I’m pleased as punch that I was born when I was. I have more choices and opportunities than any generation of women before me, but our roles have never been more complicated by deeply ingrained mixed messages, both from precious and present generations.” Instead of “perfect,” women are now supposed to be “fulfilled” — but “fulfillment” is supposed to come through mastering education, career, home, family, accomplishment, and enlightenment. “If any one of those things is left out, it’s often perceived that there’s something wrong with your life. We are somehow never enough, just as we are,” Heintz noted. It’s reminiscent of the “having it all” debate that’s been raging so fiercely in recent years — but I think the point here is that “having it all” isn’t just one definition, and nor should it be. We are exactly what we’re meant to be — no more, no less.

Check out the full “Life Once Removed” series on Heintz’s website, and check out the trailer for the vow renewal below:

More like this
Here's How To Support Jewish People Amid Rising Antisemitism
By Hannah Orenstein
Emily Ratajkowski & Pete Davidson's Astrological Compatibility, Revealed
By Nina Kahn
Prince William Condemns “Unacceptable” Comments Made To A Black Guest At Buckingham Palace
By Shahed Ezaydi
The 15 Best Reading Journals For Book Lovers
By Debbie Lee
Get Even More From Bustle — Sign Up For The Newsletter