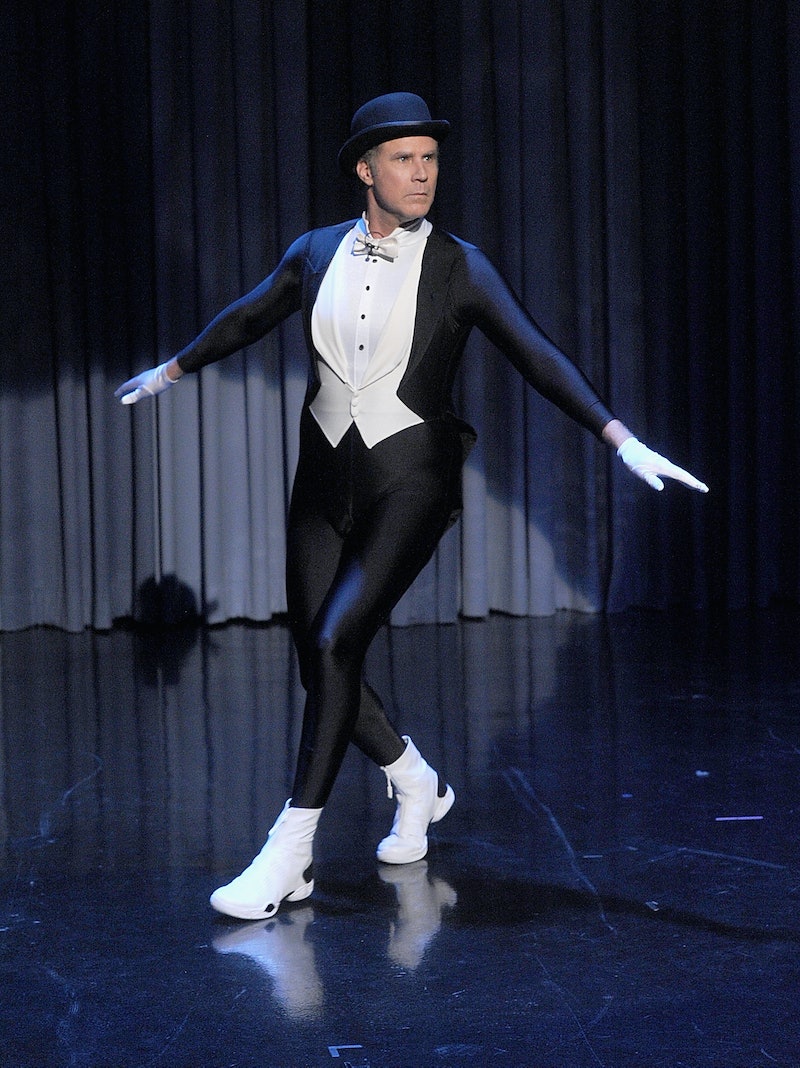 Word has it that Will Ferrell and Chad Smith were separated at birth, and only discovered each other recently at a drumming sleep-away camp. The twins happily decided to announce their brotherhood on the Tonight Show with Jimmy Fallon, during a highly contentious drum-off that almost ended with blood. Thankfully, however, the soothing tock of the cowbell prevailed. And, while Ferrell and Smith may not be technically related, I nonetheless was thoroughly disoriented when watching the video of their competition. If they had been shirtless, Ferrell's "permed shag carpet" chest hair would have made him stand out, but the two men, dressed in identical outfits, were almost perfect matches.

What's even more impressive, however, than Ferrell's stick skills with a cowbell is his ability to slip into the skins of other people, from celebrities to politicians to anchormen from the seventies. Something about Ferrell's grizzled face invites your utter trust, even as his voice paints sheer fantasy. It is this combination of candor and absurdity that makes him so magical, capable of reeling off lines like, "I'm in a glass case of emotion!" without cracking or betraying his character. Will Ferrell is everyone's saucy grandfather, the one who get away with saying anything as long as he does it with a straight face. And, in honor of Ferrell's years of comedic prowess, I have compiled for you a list of his best YouTube clips ever. Wash it down with some scotch. I'll wait.

Ferrell's chest hair has migrated north, en masse. Pearl, Ferrell's tyrannical landlord, lays down the law with an iron fist. This film, released in 2007, helped launch the website Funny or Die, which Ferrell co-founded with Adam McKay. Pearl McKay makes her acting debut as Pearl. Teething was a nightmare for the McKays.

The 2013 Golden Globes with Kristen Wiig

"You… get out of here!" This on-stage moment has the joyful exuberance of a Garth and Kat sing-along, which was probably the inspiration for the Saturday Night Live alumni's collaboration. What better way to celebrate the freedom of improv while simultaneously lampooning the occasionally overblown seriousness of an awards ceremony? While Ferrell's performance is phenomenal in this clip, the overall message also has staying power.

Wiig and Ferrell are saying, "Who has time to watch all these films? I'm too busy collecting my Internet memes." Indeed, more people may have watched this clip than have watched all five of the films they mentioned. As Wiig and Ferrell demonstrate, we are losing the ability to stay focused for longer periods of time. So, while more people may be watching and live-tweeting the Golden Globes, less people are actually watching the films themselves. And with that, on to our next short clip!

This SNL infomercial showcases Ferrell's ability to portray restrained rage. His frustration with man's best friend bubbles forth throughout the clip, lending to a sense of overall existential crisis. How does the world's biggest dog hater train dogs? Watch Ferrell to find out.

Before Tina Fey was Sarah Palin, Will Ferrell was George W. Bush. The folksy intonations, playful word stylizations, and down-home appeal are all there. This SNL sketch, during which Ferrell as Bush explains his administration's stance on global warming, also gives us a closer look at Bush's nascent soul patch, his frisbee predilections, and his deathly fear of pop-up books. Those things come out of nowhere.

In what is arguably the second most popular prayer of all time (the Lord's Prayer still maintains a considerable lead), Ferrell as NASCAR legend Ricky Bobby prays to "Baby Jesus," a deity who is as powerful as he is cute and cuddly.

In a film moment that kicked off thousands of flute lessons, Ferrell as Ron Burgundy seduces an entire restaurant with his dulcet melodies. This cat really knows how to toot the flute.

In this vintage SNL skit, Ferrell plays the cowbell as a member of Blue Oyster Cult. The chest hair is out. The curls are sprightly. Jimmy Fallon, once again, can't keep it together.

Ultimately, we have come full circle. While Ferrell may have gone on to pursue various other pursuits after his halcyon days of cowbell whacking, he will never fully escape it. Whether he is performing in a drum battle with his doppelgänger or whispering epithets into a bulldog's ear, his comedic timing, like the beat of his cowbell, is strident, firm, and unwavering in its brashness. God bless you, Will Ferrell, and may you continue to grace our internet for years to come.