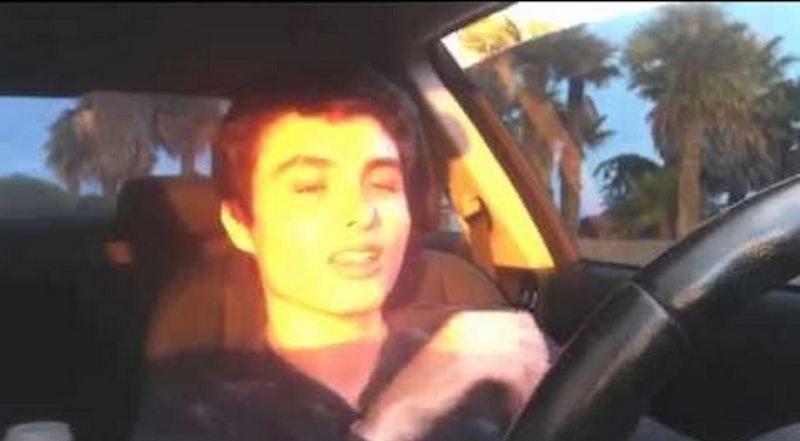 Alleged Santa Barbara shooter Elliot Rodger was reportedly influenced by the online pick-up artist community, according to new reports. In addition to his widely reported-on YouTube videos, Rodger regularly wrote racist, misogynistic posts in online forums, at least one of which is dedicated to the failings of "pick-up artist" tactics. He also wrote a 137-page manifesto blaming women for his struggles.

Rodger is suspected of stabbing three men to death on Friday before shooting two UCSB sorority sisters and one male freshman. He injured 13 more people during the spree and died of a gunshot wound to the head, reportedly self-inflicted.

Pick-up artists, or PUAs, are those men known online for their lamenting of their "nice-guy" status constantly putting them in the "friend zone." Dedicated to having sex with women determined to score at least 7 out of 10 on the PUA scale of attractiveness, these men trade tips for scoring "targets" (yes, that's code for "women") and becoming the dominant dudes they believe all women truly want to sleep with. These are the guys who try to pick women up by insulting – or "negging" – them. The beliefs that women control the sexual market, that one is owed sex for doing favors for women, that girls only sleep with jerks, and that there is one true key to getting all the (straight, hetero, unattached) sex a man could want form the basic creed of the PUA community. Women, in PUA culture, are not humans deserving of respect; they are a necessary evil to conquer in the name of sex.

We know that Rodger was a member of PUAHate.com, a forum that is not, as it would seem, dedicated to taking down pick-up artists for their delusional approach to existence. Rather, it is a place for men to lament the pick-up tactics that did not work for them. The site was taken offline after reports of Rodger's involvement emerged, but Slate reports that the forums advertise themselves as exposing "the scams, deception, and misleading marketing techniques used by dating gurus and the seduction community to deceive men and profit from them."

Rodger's posts have disappeared with the website, but on Saturday the Southern Poverty Law Center unearthed some comments, both racist and misogynistic, that he wrote on the forums. One post reads, in part:

I was shopping at Trader Joe’s and saw an Indian guy with 2 above average White Girls!!! What rage-inducing sights did you guys see today? Don’t you just hate seeing these things when you go out? It just makes you want to quit life.

Rodgers also spread his dissatisfaction with his lack of a sex partner to other forums, like Bodybuilding.com (which has since deleted his comments).

It's clear that Rodgers at least outwardly blamed women for his deep self-loathing. In a video he posted before the shootings, Rodgers vowed revenge on women who had rejected him in the past, saying, "After I have annihilated every single girl in the sorority house, I will take to the streets of Isla Vista and slay every single person I see there."

Rodgers also wrote a 137-page manifesto, titled My Twisted World: The Story of Elliot Rodger . The autobiographical document outlines Rodger's life story – and, chillingly, his plans for the "Day of Retribution." The opening paragraph of Rodger's diatribe reads:

Humanity... All of my suffering on this world has been at the hands of humanity, particularly women. It has made me realize just how brutal and twisted humanity is as a species. All I ever wanted was to fit in and live a happy life amongst humanity, but I was cast out and rejected, forced to endure an existence of loneliness and insignificance, all because the females of the human species were incapable of seeing the value in me.

Reports indicate that Rodger was mentally disturbed, and that cannot be forgotten. But perhaps his published views will serve as a wake-up call to some. PUA is not a harmless internet hobby that can be separated from the people one might interact with every day. And perhaps a few enthusiasts might realize that feminism, that radical notion that women are people, is just as much for them as it is for the rest of us.