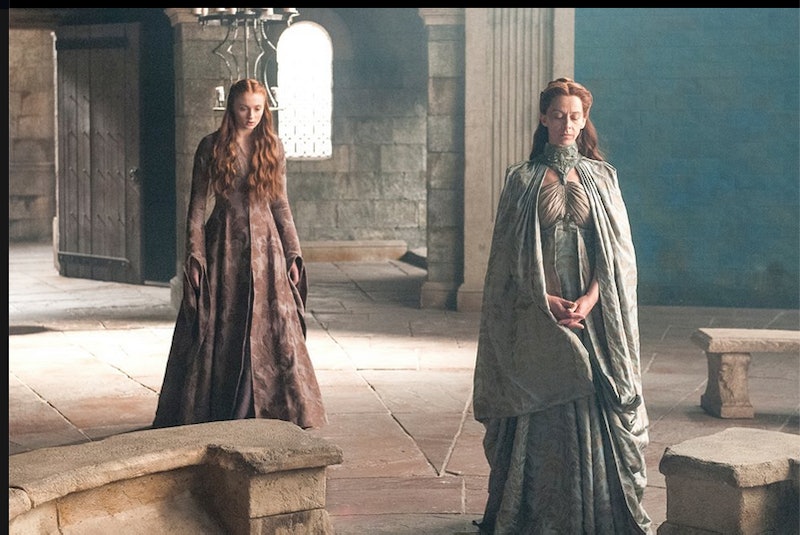 We all have that one friend or family member when it comes to Game of Thrones . That one person who has read all the books, knows all the character's first and last names by heart, and most importantly, can never seem to keep their mouth shut during Sunday night airings. They're the dicks who were actually jubilant after the Red Wedding, the ones who endlessly hint who is going to die next as you sit next to them, munching popcorn and politely trying to ignore them. They play your heartstrings like a banjo, tempting you in with tidbits and spoilers (Example: "ohhhh, Lysa Arryn is gonna get what's coming to her." "What?" " HAHA SHE GOES OUT THE MOON DOOR SUCK ON THAT") only to repeatedly crush all your hopes and dreams.

These are the guys who frequently offer up essential plot points, as if because you are not a fellow Game of Thrones scholar you lack the ability to remember who Ser Loras is only an episode after having met him, and other such subtleties. We love these people, cherish their company and yet...we hate them as much as Cercei Lannister loves wine, which is to say a lot. So here's a thank letter to that one person in all of our lives, just to show how much we appreciate their input. Seriously guys, where would we be without you?

I really value our friendship for so many reasons. I feel like since Game of Thrones went on the air, our relationship has grown deeper and more meaningful in more ways than I can count. For one, you helped me to wade through the muck and mire of first season, trying to figure out who the Starks were and why they were important, despite the show managing to establish that in it's own right. Where would I be now if not for that one evening we went out for drinks and you lectured for an hour on how Jon Arryn and Ned Stark were connected? Nowhere I tell you, nothing that has happened in following seasons would have made any sense, or so I imagine. I've never had to face the murky mysteries of Westeros without you by my side, explaining every last detail to within an inch of it's life.

I might have even been surprised when Lysa Arryn dramatically revealed her part in Jon Arryn's death an episode or two ago. I like how you understand that I am incredibly sensitive, and thus must be forewarned of any meaningful plot points far in advance. This has saved me both heartache and a lot of money on antacids and Aspirin for the headaches. Seriously, thank you. It's friends like you that remind me what platonic love is really all about.

What would I do with myself if you hadn't enlightened me as to the theory that Jon Snow is actually Ned Stark's sister's child, and thus an offspring of the last Targherian king? I am reminded of you every time Kit Harrington's brooding face and delightful curls appear on my screen, although I remain skeptical of that theory, given how dark Jon Snow's hair is. Could we possibly get together for dinner sometime so you can tell me exactly why that theory is valid? I don't usually have many social engagements, so I'm sure I can spare a measly 4 hours or so in the pursuit of Game of Thrones related knowledge. I can't think of anything more fulfilling.

Also, I know this might be crossing a boundary, but I find it incredibly sexy when you list off the name of the House and living relatives of every character as they appear onscreen. Just hearing you quietly murmur " Ser Loras of the House Tyrell, son of Lord Mace Tyrell, grandson to Lady Olenna Redwyne, Queen of Thorns, and brother to Queen Margaery Tyrell" makes my heart flutter like a caged bird who has sensed the first signs of Spring. Sometimes before I go to sleep at night, I whisper what you've said to myself, just so I can feel closer to your fountain of infinite knowledge. Listening to you recite the histories of each House within Westeros is both incredibly erotic, and a sure sign that you're a person of exquisite taste who spends their time in only the most noble of pursuits.

So in conclusion, thank you, dear friend. I know how you have suffered in silence, since you read the books years ago and as you've said repeatedly, there's just so much still to come. I will be there with you every step of the way, awaiting your input and seeking your Game of Thrones-related guidance. Enjoy tonight's episode, I know you will.