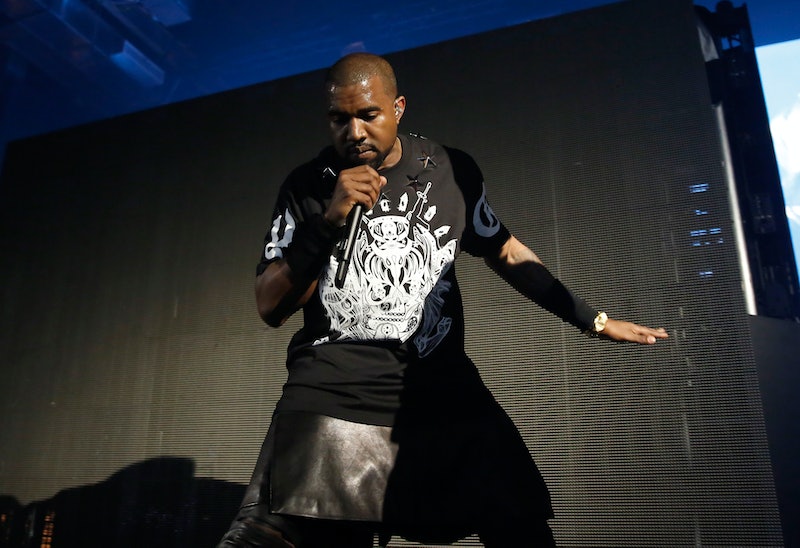 Known for steamrolling people with his own speeches (rants), Kanye West decided his wedding reception was the perfect time for a 20-minute speech. While traditionally wedding speeches are primarily for the best man and maid of honor, Kanye West didn't pass up the opportunity to take advantage of a rapt audience with his own words of wisdom. One of the reception attendants spilled the highlights to Us Weekly and recounted how West slammed the media and television industry in one fell swoop saying, "They feel like it's okay to put you on the tabloid covers to sell your image, to use you in an SNL spoof." But not to worry, West's feelings are only a little hurt because according to his alleged speech he and his new bride are "warriors" and "the Kardashians are an industry!"

He also took some time to talk about his new bride calling her the "ideal celebrity" and "the ideal art." We all know how much West likes art so that's high praise coming from him.But West's long-winded wedding speech was not his first epic monologue. Let's take a look back at these other West outbursts.

He invented leather jogging pants, damnit! The interview that put rant-Kanye back on the map debuted in 2013. Among the highlights was West addressing how people view his outbursts, which at least shows he has a self-awareness of what people think of him. He just doesn't care what they think. "They classify my motivational speeches as rants," he laments in the hour-long interview.

Jimmy Kimmel saw the BBC interview and spoofed it which brought on an all-caps Twitter attack from West. The host extended an offer to have the rapper on the show to sort through the issue on live TV. West wasn't interested in a back-and-forth with Kimmel and instead took the opportunity to set the record straight about himself in a speech that surprised many with its insight and honesty. So perhaps his rants really are motivational speeches after all.

KANYE TO THE PAPS

West has had a number of run-ins with the paparazzi, and in July of last year decided he'd had enough and went off on the cameraman, telling him not to talk. "I don't want to hear paparazzi talk to me or anybody I know," he said, clearly getting angrier with each word. "And tell everybody never talk to anyone that anyone knows. Don't talk to themselves. Don't talk ever again!"

West stopped by Harvard's school of design to speak to the graduate architecture students and bestowed upon them the wisdom of his artful eye saying, "I really do believe the world can be saved through design." Unlike many of his other mocked speeches, students really seemed to get a lot out of his words and one said it was "an unforgettable experience and [West's] eloquence and generosity were the best part."

Last, but not least is the most famous Kanye rant-speech: his interruption of Taylor Swift. It needs no further introduction, so you should simply relive the experience below:

West is no stranger to impassioned speeches, and it's not surprising that his wedding was no different. At least Kim Kardashian knows exactly who she's marrying, right? Plus, with her own history of meltdowns (like over a lost earring) this couple makes for the perfect pair.

More like this
Are John Legend & Kanye West Still Friends? The Singer’s Latest Update Is Candid
By Brad Witter
Pete Davidson Runs To Shower With Kim K In 'The Kardashians' Season 2 Trailer
By Jake Viswanath
Kanye West Has The Most Kanye Reaction To Kim Kardashian & Pete Davidson's Split
By Jake Viswanath
Christina Aguilera Took A Powerful Stand At Brighton Pride
By Sam Ramsden
Get Even More From Bustle — Sign Up For The Newsletter