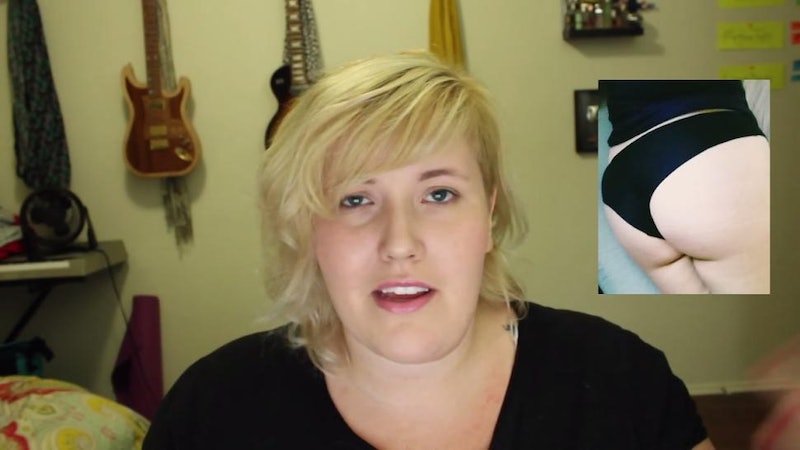 In just a few days, 28-year-old singer/blogger Meghan Tonjes's clash with Instagram has captivated cyberspace. After posting something of a derriere selfie on her profile, the administrators removed the photo for what they considered a violation of its nudity policy.

After social media users began protesting the photo's removal, and Tonjes herself began speaking out against their decision, Instagram was forced to apologize. In their public statement, administrators said, "Our guidelines put limitations on nudity and mature content, but we recognize that we don’t always get it right. In this case, we made a mistake and have since restored the content." Granted, the fact that an apology actually happened and the picture was put back up was a step in the right direction (props for admitting to being wrong, Instagram). But it doesn't change the reality that there exists a very intense and very real double standard when it comes to public nudity, and even semi-nudity, of women of a larger size.

Keeping in mind that social media serves as a platform for everything from beachy bikini shots to lingerie selfies, one was left to imagine that Tonjes' photo must have been pretty racy. Surely if the picture warranted removal, it must have been a total nude shot, or maybe a close up of her cheeks. The reality is, however, that the photo was just your basic booty pic. Clad in pretty respectable black panties, one sees far less of Tonjes's assets than can be said of far showier backside selfies — including ones posted by celebs like Kim Kardashian, Rihanna and Sofia Vergara. Besides the fact that these women are celebrities and social media wouldn't dare remove their photos unless they totally crossed some sort of serious ethical boundary, the difference between their butt selfies and Tonjes' is simple: she isn't a size 2-6.

We see this all the time — from seaside mockery by beach-goers who don't deem it appropriate that a plus-size woman dare show her body in a two-piece outside the comforts of her own home. We see it in the hateful comments that readers post on blog or news articles any time a plus blogger like Gabifresh (coiner of the term fatkini) posts a swimsuit photo on their personal sites. If you're a plus-size person, male or female, criticism and dismissal are prevalent in daily life.

Instagram is not alone in being offended that a larger woman should feel confident enough — beautiful enough — to show off her body. The mainstream does not approve of imperfection, be it in the form of stretch marks, cellulite or even just a of normal amount of fat on a rear end. And that often manifests itself in public demonstrations of bullying and antagonism, be it through trolling on Twitter, or eradication by website administrators of the so-called imperfect, inappropriate content.

Ironically, Tonjes's photo was part of her weight loss documentation. For months now, this woman has chronicled her 70-pound transformation. Weight loss: the thing that so many people want and expect of plus-size women. Yet even after losing all this weight, someone at the back of a screen still found fault with her body — because someone will always find fault with a body that isn't stick thin. As Tonjes told CBS, "I want people to see all different bodies, and I want to be in a bathing suit or shorts, like every other girl that I know, and not feel that because people don’t want to see that kind of body that I shouldn’t be visible."

In her case, she's somewhat lucky. People rose to the rescue. Social media users stood up for her. Instagram ultimately backed down. Despite this, however, we've been shown once more that the majority does not want women like Tonjes to be visible. Women who exceed a certain size should hide their shame in baggy layers and keep indoors. They shouldn't be proud of their bodies. They shouldn't dare consider themselves beautiful. They shouldn't traumatize innocent civilians' eyes with semi-nude content featuring their horrific body fat.

We're a long way from grasping the simple truth that perfection is imperfection. Perfection is humanity and kindness and acceptance. What this whole situation has reified, though, is that there are people like Tonjes, and her subsequent supporters, willing to fight the battle.