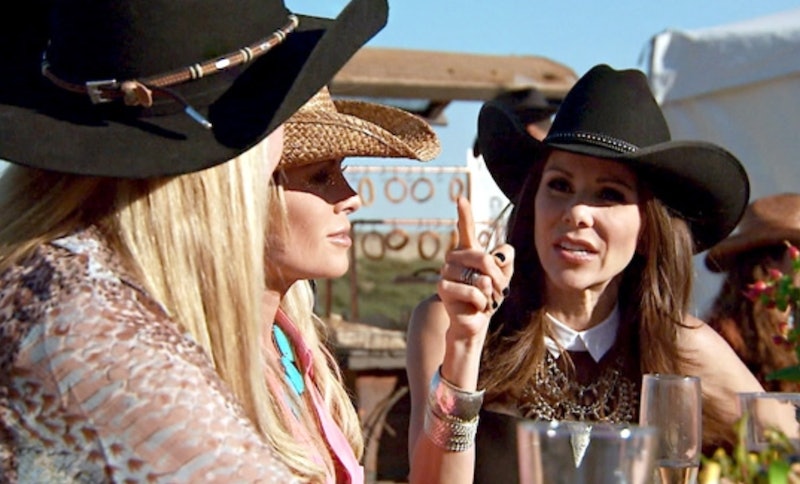 I am not a proud person. I can admit when I am wrong. That being said, remember when I predicted that the Vicki Gunvalson and Lizzie Rovsek conflict would be THE CONFLICT of Real Housewives of Orange County Season 9? Not the case. As of Monday night's episode, it seems like THE CONFLICT of the seas might actually belong to neighbors-to-be Heather Dubrow and Shannon Beador. I thought Chairgate would go away, but no. Nope. Noooo way. Chairgate is not to be trifled with. Note to self: Never take Heather's seat. Note to self, part two: Never show up late to Heather's hoedown. Note to self, part three: Procure a pair of "psychedelic" zebra print socks.

Before I dig into THE CONFLICT, what happens with Vicki and Lizzie? Vicki rolls up to the hoedown, pretends not to recognize Lizzie (Vicki actually said "Good to meet you" to Lizzie. I screamed and threw my hands up in the air. SHE DID NOT. AHAHAHAHAHAHAHAHAHAHA. Vicki is so good at being Vicki), but then! A crazy twist: Vicki apologizes to Lizzie. In her own Vicki way, natch. They agree to start over and they take reconciliatory tequila shots. Looks like they're going to be fine. And so it is.

As for Heather and Shannon? WOOF. Heather is very mad at Shannon for being late to the hoedown/missing the note-burying first dig ceremony (but she's not very mad at Vicki. The Chairgate grudge is REAL). Heather confronts Shannon almost immediately. This embarrasses Shannon. Shannon explains that her husband and kids had basketball practice and that she tried her best to get everyone to the hoedown on time. Heather isn't having it. She's furious that Shannon didn't warn her she'd be tardy for the party. HOEDOWNGAAAAATE.

As Heather huffs off, Shannon's husband says something about getting home at 12:30 “just like [Shannon] asked.” (WAIT. The party started at noon. Did Shannon ask David to be back at 12:30 because she wanted to be late? Chairgaaaaate! SALTY, MRS. BEADOR.) (WAIT. Was David joking around/attempting to stir the pot? SALTY, MR. BEADOR.)

“Great. So now I’m ruining the fucking hoedown," Shannon says to Tamra. OH RIGHT. We're at a hoedown. With onion rings and square dancing and a mechanical bull (sorry, Tamra). Why are we wasting our time with Chairgate when there are onion rings to snarfle?!

As if the Housewives hear my cries, they decide to let the dramz go for the sake of the hoedown. I don't think anything actually gets resolved? If I'm being honest, I stopped caring about all of the dramz the moment the kids started eating donuts hanging from a stick. WHAT AN AWESOME CONTEST. Like I said, I'm not a proud person, but I'm certain I'd win that contest. I can gobble donuts. Now I want a donut. Or seven.

Unfortunately, we cannot participate in a donut eating contest forever. Every hoedown must come to an end. The peace is only temporary. The Shannon/Heather beef will pick back up again. Oh, I'm sure of it. I might've been wrong about the Vicki/Lizzie thing, but I am confident that the Chairgate/Hoedowngate grudge is REAL.