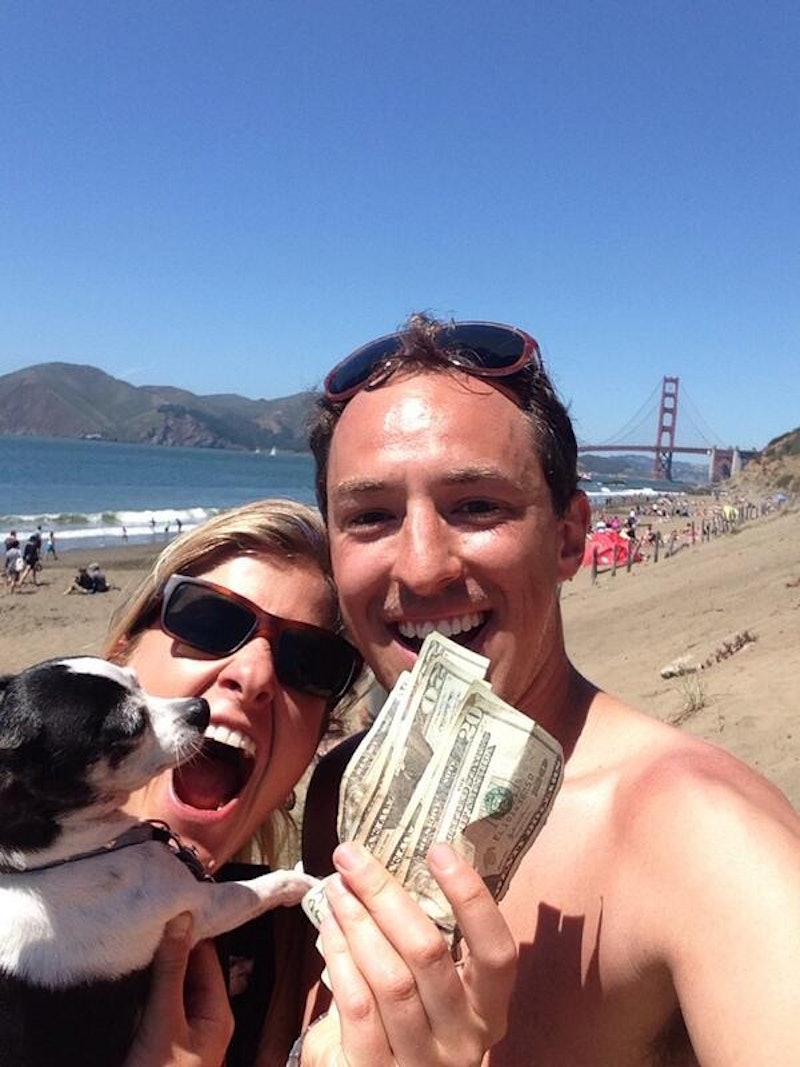 Do you live in or around San Francisco? If yes, I have excellent news for you: An extremely generous individual with far more money than he or she needs is hiding cash in drop spots all over the Bay Area, then tweeting out directions on how to find it from the Twitter account @HiddenCash. I’m serious. Robin Hood is alive and well, and apparently living in San Francisco.

According to the @HiddenCash Twitter handle’s bio, this whole amazing thing is “an anonymous social experiment for good.” Speaking to the Bold Italic, the anonymous philanthropist has made a relatively absurd amount of money in real estate; but although (s)he has donated both money and volunteer hours to charities like the East Palo Alto Kids Foundation, local food banks like the SF Food Bank, and international aid organizations like Kiva, (s)he also wants to do something about the wealth inequity in the Bay Area. “I’ve made millions of dollars [in] the last few years, more than I ever imagined, and yet many friends of mine, and people who work for me, cannot afford to buy a modest home in the Bay Area,” HiddenCash’s email continued. (Sounds about right, given what we learned last week about how much you need to make in order to be able to buy a house in SF). “This has caused me quite a bit of reflection. I am determined to give away some of the money I make, and in addition to charity, to do it in fun, creative ways like this.”

And all HiddenCash asks in return is that you tweet your findings and tag @HiddenCash:

It’s not unheard of for people or organizations to send the world on a wacky treasure hunt; that’s the premise behind reality shows like The Mole, books like The Merlin Mystery, and even the short-lived television drama Push, Nevada (which, by the way, is still one of my favorite TV shows in the history of the universe). I love, though, that HiddenCash is employing social media for this campaign — it’s both creative and thoughtful, and hopefully the cash drops will help out some people who really need it. Maybe it will even bring people together in the spirit of the thing. Wouldn’t that be terrific?

The mystery person behind the social experiment also told KTVU that (s)he is hoping to take HiddenCash worldwide eventually. In the meantime, though, a drop is planned for San Jose on Wednesday; another one will be hitting Los Angeles next weekend, and New York might even get in on the game next month. Happy hunting!

More like this
How To Switch Back To A Personal Instagram Account From A Professional One
By Alexis Morillo
An Open Letter To The Person Who Bought Steve Jobs’ Birkenstocks For $218,000
By Ginny Hogan
8 Money Saving Experts To Follow For Accessible Advice
By Maxine Harrison
What Does “The Rizz” Mean On TikTok? The Viral Slang Term, Explained
By Alexis Morillo
Get Even More From Bustle — Sign Up For The Newsletter