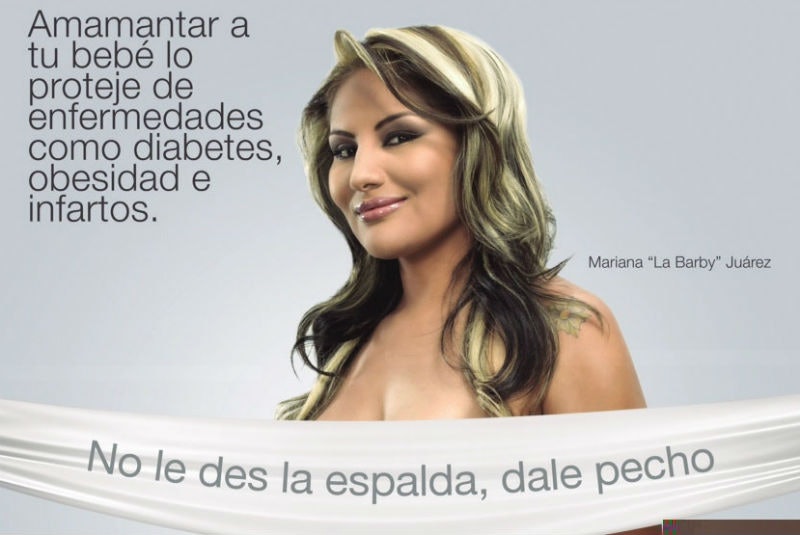 A Mexican health care campaign has released a series of images advocating a pro-breastfeeding position...and critics are blasting it. The reason? The women in the ad — actresses Maribel Guardia, Cecilia Galliano, and Camila Sodi, and female boxer Mariana Juarez — are topless. Instead of a shirt or a bra, they're wearing banners across their chests reading "No les des la espalda, dale pecho." In English, this translates to "Don't turn your back on them, give them your breast."

For many women living in Mexico, this issue is a pertinent one — according to WHO statistics, only 14 percent of Mexican mothers exclusively breastfeed their children during the first six months, says the Latino Post. It's not so surprising, then, that Mexico City health officials would make breastfeeding a primary issue. After all, breast milk is loaded with nutrients and antibodies, and formula-fed babies are more likely to suffer from type 2 diabetes, asthma, and obesity, among other conditions.

What does surprise plenty of advocates, though, is the portrayal of the women in the campaigns. Critics have slammed the images for being overly provocative for a breastfeeding ad, and for using too many light-skinned, slender models. Regina Tames, director of Mexico's Group for Informed Reproductive Choice, called out the images in a comment: "I don't know what these mothers reflect, or who they were supposed to attract." In fact, Sodi later tweeted that she thought the campaign was in "bad taste." (The tweet has since been taken down, and she's released a statement saying that she does agree with the message behind the images...just not the final artwork.)

But that's not the only criticism being slung around. Health advocates also say that the images send the wrong messages about breastfeeding itself. The Associated Press reports that a group of activists has issued the following message: the campaign serves to "condemn mothers, rather than informing them about breastfeeding, and they reduce a social problem with multiple players...to one person: the mother." In other words, many feel that the campaign makes women feel guilty more than anything else.

So what's the takeaway here? Although it seems ridiculous to criticize the photos for showing topless women — it's not like mothers can pull a Houdini and feed their children while covered up with a shirt and bra — Mexico City may have gone too far. Recent breastfeeding campaigns that push the envelope have worked, but they also didn't accuse mothers of being negligent. Looks like health care officials will have to take another crack at the issue — and this time, maybe they should consider including a little more diversity when it comes to their models.

More like this
How Getting An Abortion Has Changed From The ’60s Through Today
By Amanda Chatel
The UK Abortion Laws In 2022, Explained
By Sophie McEvoy
Why You're Seeing Green Bandanas At Abortion Rights Protests
By Lexi Inks
Plan C Vs. Plan B: What's The Difference?
By Lexi Inks
Get Even More From Bustle — Sign Up For The Newsletter