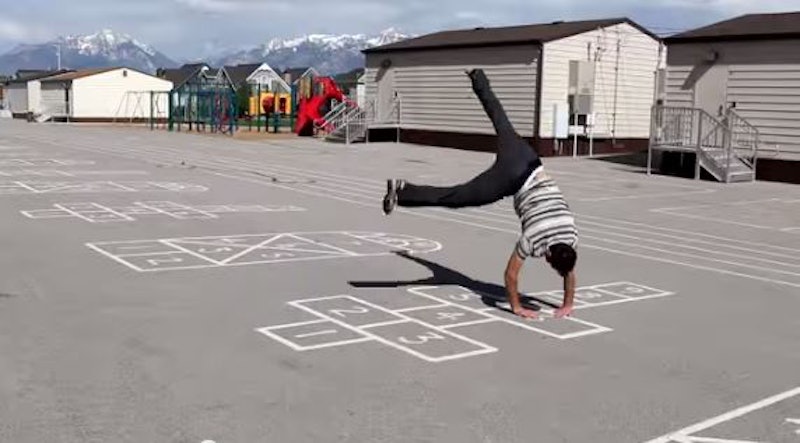 Hopscotch isn’t just for kids anymore — at least not according to Ronnie Shalvis, Extreme Hopscotch stuntman and parkour trainer, and his equally adept buddy, Austin Ipsen. The pair just took the classic playground game to the next level. The result of what happens when you pair a standard nine-square hopscotch board with some crazy acrobatic skills, Extreme Hopscotch has its players leaping, jumping, and flipping from square to square in an impressive display of athleticism. It’s unsurprising that the video Shalvis shot of himself and Ipsen showing off their skills has started making the rounds; check it out below. It’ll blow your mind. Seriously.

The video, of course, got me thinking: What other classic recess games could be given the extreme treatment? I mean, your average playground is chock full of climbing structures and blacktops galore; they’re all just waiting for someone with the skills (or skillz, if you prefer) to come along and reinvent them. Most Extreme Playground Games would probably be pretty dangerous unless you really know what you’re doing, so I wouldn’t try these at home if I were you — although of course if you’re a stunt person or parkour expert or whatever, then go right ahead. Don’t forget to show us your results!

I remember a couple of kids in my elementary school needing to get stitches after splitting their lips trying to turn monkey bars into an extreme sport. Presumably this wouldn’t be as much of a problem for folks like Shalvis and Ipsen.

Mud runs may not be my thing, but if they were, I would totally want to see an Extreme Tire Swing obstacle on the course. Fire is optional.

Most of my time on the playground was spent playing either Pickle or Wall-Ball — which, by the by, are games just waiting to get spiced up with some gymnastic talent.

And I’m not talking about the social media app, either. I see it being kind of like Extreme Hopscotch, but with one of those rubber playground balls added to the mix.

I’m not totally sure what this would consist of, but I imagine it would involve creating absurdly beautiful sidewalk chalk images while doing a whole bunch of crazy flips and stuff.

Bounce ball, do back handspring, pick up jacks. Easy-peasy.

Elsa would be so awesome at this.

More like this
Cluttercore Is The Home Decor Trend That Lets You Be Messy
By Emma Garza
This Viral TikTok Trend Is Exposing Everyday Scams
By Sophia Moore
American Girl Doll Memes Are Going Viral On Instagram & Tiktok
By Emma Carey
What Is A “Softboy?” The TikTok Term & Aesthetic, Explained
By Courtney Young
Get Even More From Bustle — Sign Up For The Newsletter