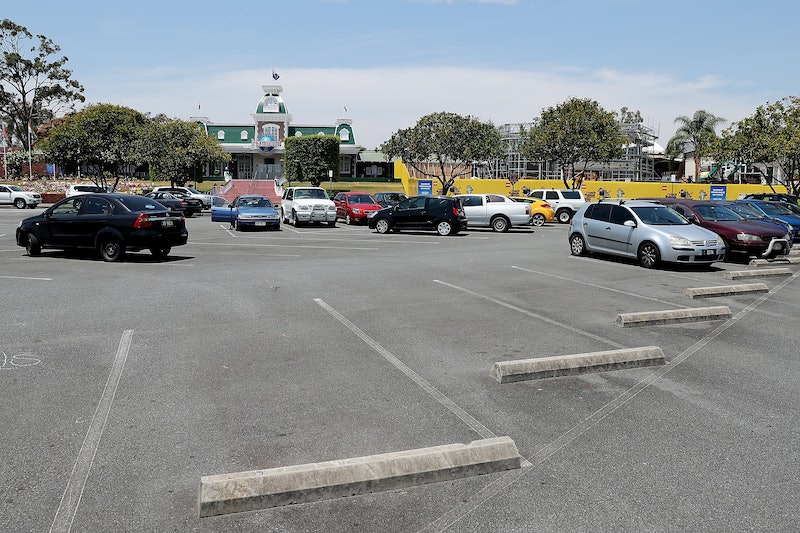 Some people honestly, truly believe that women are generally terrible drivers. Those people might have had a hand in the new, pink parking spaces in South Korea, which are wider, longer, and pink, with female iconography similar to the kind found on women's restroom doors. The capital city of Seoul spent $100 million on these female-only parking spaces, and officials are insisting that they're not meant to be patronizing; they're solely meant to promote safety and make things easier for women. How thoughtful of you guys!

At least that's what we would have (sarcastically) thought if this had been done in our city. The women of Seoul, however, may view this gender partiality differently. "It is like adding a female touch to a universal design and make things more comfortable for women," Cho Eun-hee, assistant mayor for women and family affairs of the Seoul Metropolitan Government, told the Korea Times.

"As more women engage themselves in social life, their desire to improve the quality of life and demand for public support is increasing," said Cho, the highest-ranking female official in the local government in Seoul.

Besides being wider and, well, pink, the spaces are also generally better-lit, monitored by CCTV, and closer to exits, elevators, and emergency bells. Essentially, they're like handicap spaces, but for an entire gender. Even if the city's intentions were completely pure and they really did have women's best interests in mind, was the pink really that necessary? And the girl-in-a-miniskirt icon? Couldn't a plain, white W suffice?

The parking spaces are just one component to a $700 million initiative dubbed "Women Friendly Seoul." Other projects in the works include installing special female-oriented toilets; resurfacing pedestrian walkways with a spongy material designed to make walking in high heels more comfortable; and lowering overhead straps on public transportation so women can reach easier.

The most ironic part of this city-wide project? The idea stems from former mayor Oh Se-hoon's (who is a man) meeting with female city officials, who complained about their heels getting stuck in sidewalk cracks. "Mayor Oh then realized that women's happiness in the city means something more than just achieving gender equality," Cho explained to the Korea Times. "He named the project himself and cares much about its progress." How nice of him to decide for everyone that squishy sidewalks was more important than gender equality.

Naturally, this gender-biased urban planning has polarized the world, with some calling it "staggeringly patronizing" and others saying they're glad it's "hit a raw nerve."

Here are some choice responses: