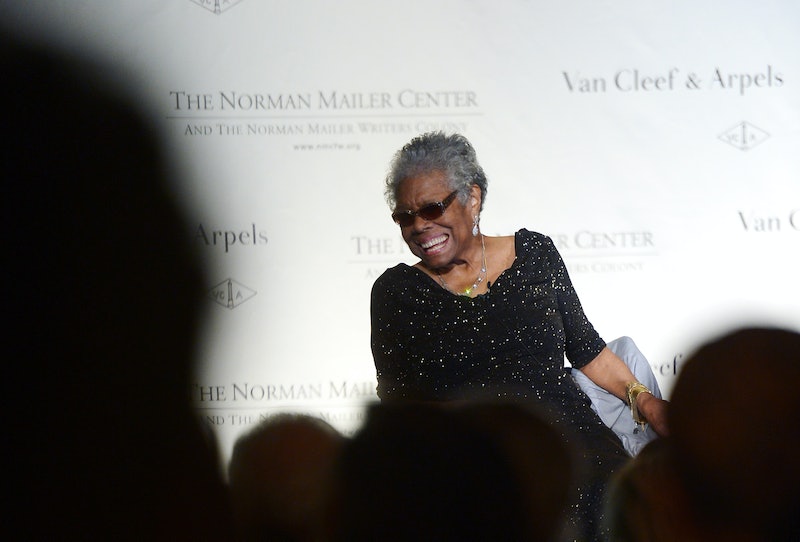 Writer and civil rights activist Maya Angelou died Wednesday in her home in Winston-Salem, North Carolina, and the literary world is — as expected — reeling.

We know her best for her memoir, I Know Why the Caged Bird Sings, but Angelou, who was 86, was also a college professor, a dramatist, a filmmaker, a poet, and a dancer. She was born a black female in the racially segregated world of 1928 and, over 86 years of life, witnessed almost an entire century of war and change and civil rights setbacks and advances and literary blossoming. Her memoir's publication was a game changer for female writers and writers of color — over on NPR, Joanne Braxton, a professor at the College of William and Mary, says that Angelou "brought about a paradigm shift in American literature and culture... so that the works, the gifts, the talents of women writers, including women writers of color, could be brought to the foreground and appreciated. " That's a gift that's impossible to repay.

Paying homage to the passing of a favorite writer is a daunting task. Of course, every writer wants to lay down some beautiful, appropriate statement as though they're laying down a rose. Some living writers did their best, while others paid tribute to Angelou in her own words:

"I met her in my callow youth on an elevator heading to a fundraiser, 1983. I was like a teenaged girl with the new issue of Tiger Beat. "I think you're super great!" I squealed. "Thank you, dear," she nodded. I thought she danced like she had diamonds at the meeting of her thighs. The rest of the night I don't remember." (via Facebook)