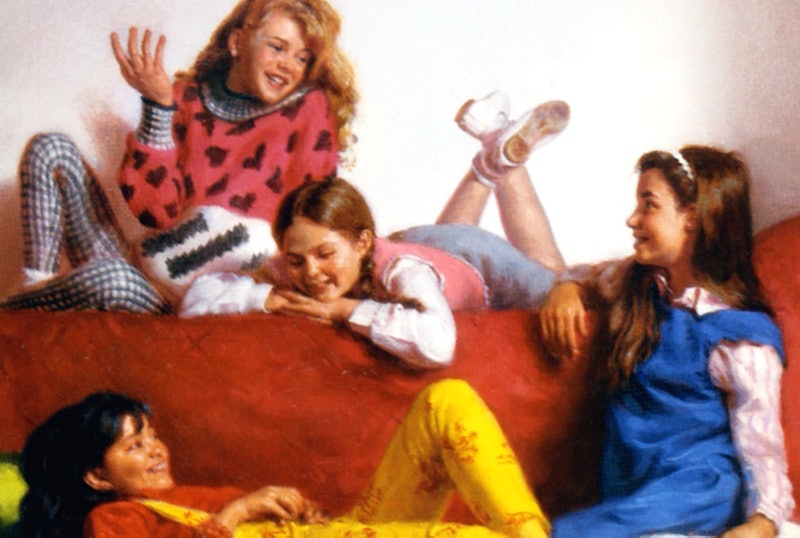 It takes a pretty special young adult book series to get its dedicated readers pumped up about relatively snoozy things like running a business, taking care of packs of wild young children, being fiscally responsible both as and individual and a group, and just generally being extremely grown up before even getting so much as a driver's license. But Ann M. Martin's The Baby-sitters Club series accomplished all that, and so much more.

Martin's series first hit shelves back in 1986, eventually delivering a staggering 131 regular series entries, 58 special editions of various stripes (from Super Specials to the Mysteries series), plus the later-set Friends Forever series and a recent reissue and spanking new prequel. The BSC series remains a perennial favorite for plenty of young readers. Although the BCS itself eventually grew to include a hefty number of ancillary members — remember Logan? and all the junior members who were maybe not quite old enough to babysit on their own? what about smarty pants Shannon Kilbourne? — the core four always held the club and their friendships together.

If you read Martin's beloved series, there's no doubt you had a favorite babysitter, but can you remember who it was? Was it sporty president Kristy Thomas, creative VP Claudia Kishi, shy secretary Mary Anne Spier, or super-stylish treasurer Stacey McGill? Let's find out!

KRISTY WAS YOUR FAVORITE IF…

You were a tomboy who excelled at sports.

Kristy was the athlete of the group, and her love for sports even extended into forming her very own softball team for some of the BSC's best charges: Kristy's Krushers, which is definitely an intense name for a kiddie softball team, but that's Kristy for you.

You came from a crazy-big blended family.

The BSC books never balked at showing all kinds of families — from the various members' fams to those of the kids they sat for — but few were as lovingly blended and modern as Kristy's. To wit, Kristy had: a mom, a dad, a stepdad, two older brothers, one younger brother, one stepsister, one stepbrother, her beloved grandmother, and an adopted sister. Full house!

Your weren't afraid to get a little muddy when it came time to play.

Kristy was never particularly into being fashion forward or super stylish (unlike some of the BSC's other members), but her classic uniform (jeans, tee shirt, sneakers) always allowed her to get messy and muddy during playtime. What kid wouldn't love that?

You were adorably bossy as a child.

As president and original founder of the BSC, Kristy definitely has a claim over the club (there's a reason why the first BSC book is called Kristy's Great Idea, after all), and that sometimes came out with a touch of the ol' bossiness.

STACEY WAS YOUR FAVORITE IF…

You were a fashion plate even in middle school.

If there was one thing you could always count on, it was that Stacey looked awesome, and Martin took great pains to detail her cool outfits.

You didn't have a sweet tooth, even as a kid.

Stacey's big secret was a surprising one — she had diabetes and was very sensitive about it — and while she often slipped up on her diet, her sugar-free lifestyle was sweet and relatable to other gals with diabetes and even kids who just didn't like sweets.

Stacey moved to small town Stoneybrook from New York City, and she never failed to deliver fun musings on life in the big city (and even more fun letters from her city-bound best pal, Laine).

You were a secret math whiz in school.

Stacey made a perfect treasurer for the BSC because she was super-skilled at math and was a whiz with numbers. A fashion plate with a math mind? BSC went there, and was all the better for it.

CLAUDIA WAS YOUR FAVORITE IF…

You needed constant creative stimulation as a kid.

Claudia was crazy creative in just about every way possible — fashion, drawing, painting, sculpting — and that influenced every thing she did and made.

You weren't afraid to dress a little crazy.

Stacey may have been the fashion plate, but Claudia was prone to being super trendy and kind of out there with her fashions, but she always looked awesome. Macaroni earrings? Go for it.

You were a junk food monster.

Claudia inhaled junk food like most people inhale air, and every BSC meeting was a wacky lesson in observing just how much she could put away in one setting (read: a lot).

Your other favorite book series was Nancy Drew.

Despite her love for creative endeavors and lack of interest in other parts of academia, Claudia was seriously dedicated to the classic series, to the point that she'd even hide them from her disapproving parents!

MARY ANNE WAS YOUR FAVORITE IF…

You were always on the shy side.

Most of the original members of the BSC were a bit outsized when it came to their personalities, but shy Mary Anne helped balance that out nicely. After all, you can't have an organization entirely made up of extroverts, can you?

Your organizational skills were top-notch, even as a tween.

As club secretary, the details mattered to Mary Anne, and she was the best at remembering them, recording them, and reminding everyone of them.

Your parents were super overprotective when you were little.

Mary Anne was so shy and precise partially thanks to her overprotective dad, who acted out of love but was probably just a bit over the top. If you had overprotective parents, there's no way you didn't see yourself in Mary Anne.

You're (still) a cat person.

Remember Tigger the kitten? Come on!