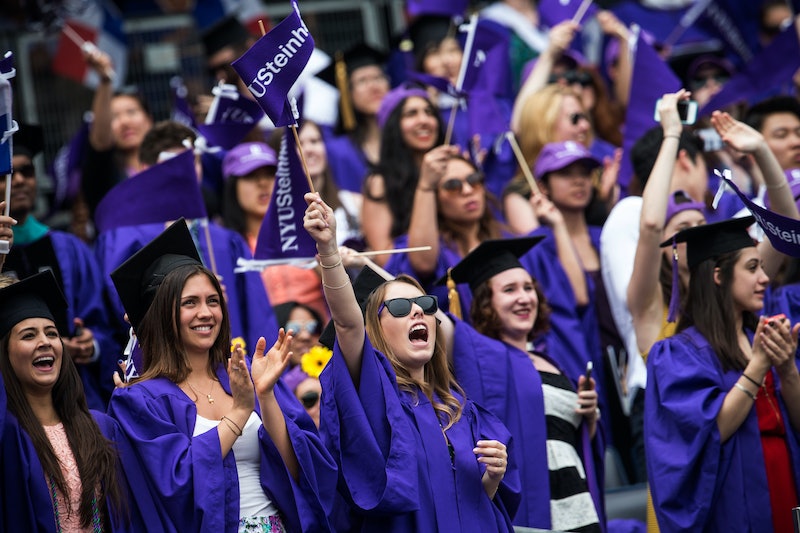 Congratulations, class of 2014! You've worked hard, possibly played harder, made friends, lost friends, fallen in love, had your heart broken, learned a lot both in and out of the classroom, lived on your own for the first time, and had more personal victories, tragedies, and milestones than I could possibly list here... and yet, instead of getting to bask in your accomplishment, you are now being forced to answer the question everyone is asking you even as you are asking it yourself: "Now what?"

Unfortunately, I can't answer that question, and while I could tell you some vaguely helpful platitudes that I'm sure you've heard a million times before, from much more qualified advice givers than me, I don't think that's what you're looking for. And anyway, telling you that you're going to be okay is all well and good, but this is your first week as a post-grad, and it probably doesn't feel that way right now.

You've got a long road ahead of you, but the good news is that it's been walked by countless generations of aimless recent college graduates before. Better news still, some of those post-grads made films about what it feels like to be lost, lonely, scared, and unsure, which means that now you can watch them, relate to them, and, in doing so, feel a little less lost, lonely, scared, and unsure.

Here are 7 films to help ease your post-grad blues.

Before she was writing, directing, and starring in her own TV show, Lena Dunham was writing, directing, and starring in her own indie film about Aura, a recent college graduate who comes home for the summer and enters a tailspin tempered only by a series of confusing, semi-romances and the re-kindling of a friendship with her wild-girl childhood bestie. Tiny Furniture features Dunham's eventual Girls co-stars Jemima Kirke and Alex Karpovsky, in addition to her real-life mom and sister, playing her fake mom and sister.

If you've never seen Mike Nichols' classic The Graduate, stop reading this article right now and go watch it by any means necessary. It may have been made in the 1960s, but the feelings of helplessness and frustration that Ben (played perfectly by Dustin Hoffman) experiences in the weeks after graduation ring true today. His dilemma (he's having an affair with an older woman even as he's falling in love with her daughter) you may not relate to quite as much.

Keep in mind, I mean Noah Baumbach's 1997 directorial debut, not the 2005 soccer movie starring Will Ferrell. Kicking and Screaming is the sometimes all-too-real story of a group of college friends attempting to navigate the world together after graduation, even as the realities of post-college life begin to tear them apart. Imminently quotable ("Oh, I've BEEN to Prague"), the film is by turns hilarious and heartbreaking.

Easily the most '90s movie you will ever, ever see, Reality Bites tells the story of Leilana Pierce (Winona Ryder) a post-grad who finds that being class valedictorian doesn't guarantee you a job or a purpose in life, and her roommates (Ethan Hawke, Steve Zahn, and Janine Garafolo because I TOLD YOU THIS WAS THE '90s!), all of whom attempt to make sense of the brave new world in different ways. Along the way Leilana finds herself in the middle of a love triangle with Hawke and a TV executive played by Ben Stiller, and many now-hilarious references are made to completely outdated technologies.

Adventureland will unfortunately remind you that a liberal arts degree has very little practical use without life experience... but luckily, post-grad life is all about gaining life experience. At least, that's what James (Jesse Eisenberg) learns when he is forced to take a part-time job at Adventureland, the crappy amusement park run by Bill Hader and Kristen Wiig. It's there that he falls in love with Em (Kristen Stewart), who is already involved with Connell (Ryan Reynolds), and through their relationship begins to realize what's actually important.

Even though Dazed and Confused is about the last day of high school, it's a film with a lot of themes that recent college grads can relate to. It's easy to get swept up into the freedom of post-grad life, to party and hang out with friends every night- what's hard is figuring out what your goals are and how you want to go after them. The soundtrack is killer, and it features a huge ensemble cast of soon-to-be megastars: notably, it's Matthew McConaughey's first film. Alright alright alright.

Steveo and Bob (Matthew Lillard and Michael Goorjan) are two early-twentysomethings with no real goals beyond continuing to live an anarchist, punk lifestyle. But with the effects of their lifestyle growing more apparent, and the mounting pressure from his parents to consider going to law school, Steveo begins to find it harder and harder to reconcile his individuality with the realities of growing up. Keep your eyes peeled for a super young Jason Segal!