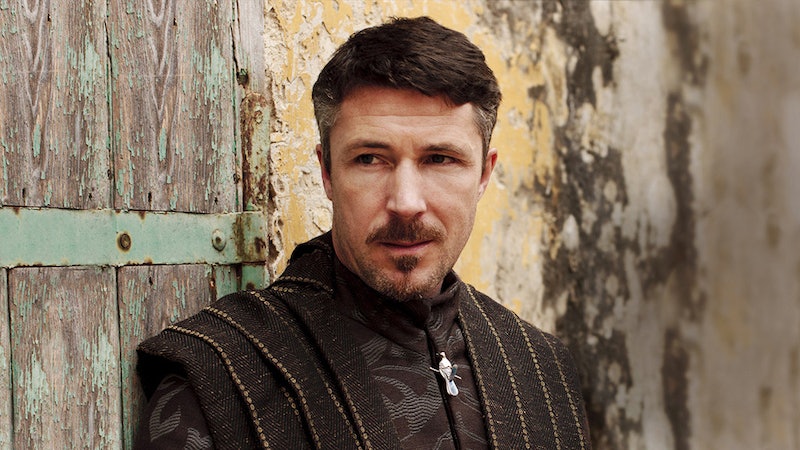 It's hard to rank which character is the most conniving on HBO's Game of Thrones — although, IMHO it's definitely the very bald and very castrated Varys (AKA The Spider) — but Lord Petyr Baelish (AKA Littlefinger) totally deserves to have his name on the ever-growing list. He's just generally a slimy person who is never up to anything remotely good. It seems like his one and only goal in life is to achieve self-glory, and he'll do basically anything to get it. Spoilers from this point on. From having some part in King "Worst Person Ever" Joffrey's crow-pie fiasco to aggressively making Lysa fly out of her own moon door, no one should ever be surprised by anything Littlefinger does in the future.

But real talk, why is he even called "Littlefinger"? If my name were Lord Petyr Baelish, I'd totally stick with that forever. It's a pretty fierce name. So what's up with the nickname that makes him sound like someone's pinky finger (or other small, er, appendage)? Because that's not devious or fearsome in any way. It's actually pretty childish and demoralizing. If I were told a man named Lord Petyr Baelish had plotted to kill a king and pushed a woman out of her own castle, I'd be like, that guy's both ballsy and powerful. But it all changes when you say someone named Littlefinger did both of those things. All of the sudden it's like, that guy sounds like a total prick.

Well, according to the books, Baelish is called Littlefinger because of his familial roots. He comes from The Fingers, which is a rocky peninsula near the Vale of Arryn, and his father was the lord of the smallest section of it. Combined with his height and his heritage, the name Littlefinger eventually came about. From the books:

Catelyn’s mouth grew tight. “Littlefinger,” she murmured. His face swam up before her; a boy’s face, though he was a boy no longer. His father had died several years before, so he was Lord Baelish now, yet still they called him Littlefinger. Her brother Edmure had given him that name, long ago at Riverrun. His family’s modest holdings were on the smallest of the Fingers, and Petyr had been slight and short for his age.

But guys, do we really believe George R. R. Martin's tale of the Lord's nickname? Because I definitely prefer the idea that Baelish is referred to as Littlefinger because he's lacking in the downstairs department. Obviously Baelish is going to tell everyone he's nicknamed after his family roots; why would he want to be running around the Seven Kingdoms telling all the ladies about the goings-ons in his pants? So, he can totally tell people whatever he wants, but we all know the truth.