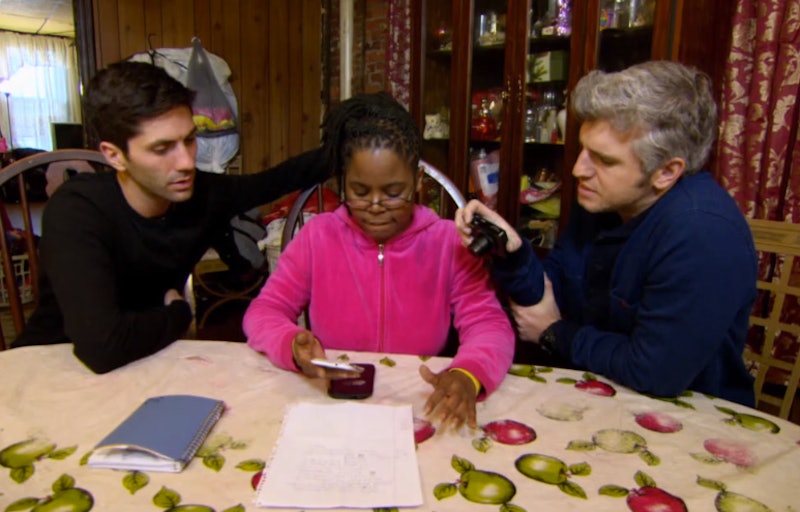 A piece of advice for any potential Catfish victims: if an online friend ever claims to be in the entertainment industry in any way, shut it down. Countless episodes have included catfishers posing as models, singers, and thanks to this week's episode, music producers. "Lucille & Kidd Cole" is yet another Catfish episode to focus on a supposed semi-famous person, but it still stands out because of how much Kidd was able to get away with and the unique way Nev and Max took him down.

All episodes of Catfish share certain elements, especially in the beginning, and then something happens that sends it twisting down a whole new path of lies and dramatic music. So while Lucille's story might sound familiar to Catfish fans at first, it quickly escalates into something we've never seen before.

Here's how "Lucille & Kidd Cole" stacks up to other Catfish tales.

Lucille contacted Nev and Max because she wasn't sure if her Internet friend, Kidd, was a "friend or foe." He's allegedly a music producer, the youngest person to be signed to Kanye West's GOOD Music label, and as a fan of the music posted to his SoundCloud account, Lucille contacted him online.

The two quickly became friends and had what Lucille describes as a "big sister, little brother" relationship. Then one day Lucille got a call from Miguel, Kidd's manager. He asked Lucille to help arrange some things for Kidd while he was in Washington D.C. and promised that if she took care of everything, she'd have a job with GOOD Music. Lucille set up hotel rooms, appearances, private security, transportation, and more, and wouldn't you know it, she soon got huge bills for those exact things.

Lucille tried to get in touch with Miguel but he had suddenly disappeared, along with the money that was supposed to pay for everything she arranged. Nev and Max were immediately suspicious and since any connection to Kanye West makes for a great episode of TV, they decided to answer Lucille.

What followed was the standard Catfish protocol. Nev and Max got the full story from Lucille, the camera zoomed in on friendly messages, and Lucille wondered how she ended up in this situation. After that, however, things got kind of crazy.

Brace yourself, because what happened next has never been seen on an episode of Catfish before: Nev used something besides Google to figure out what Kidd was hiding. Rather than searching his phone number, Nev used his connections to call MTV's Music Superviser to find out how exactly someone can get an MTV.com/artist page. Turns out, pretty much anyone can make a page and so Nev went back to his usual methods.

What he uncovered is also pretty unusual for Catfish. Kidd's real name is Jerez Coleman and he had tricked other people before, but none in a romantic way. He never pretended to love anyone, he just was really good at acting important and conned people out of money and services.

Through a Facebook page called KIDD COLE AKA KING COLE SCAM Artist, Nev found Lorreta, an independent limousine driver who had driven Jerez and his crew around and was never paid. She's also one of the funniest people to ever appear on Catfish and said things like "i'm gonna haunt you like a ghost, you can call me Spooky," and we can only hope she'll appear on another episode soon.

After hearing about Jerez's long history of cons, Nev called him to setup a meeting and based on how quickly he agreed, it was obvious that Jerez had absolutely no idea what Catfish is.

A Little of Both

For the rest of the episode, Jerez's behavior fluctuated between standard Catfish asshole and unprecedentedly delusional jerk. He met with Lucille, Nev, and the camera crew on a pier, one of the show's more picturesque locations (though there wasn't much competition on that front), and remained extraordinarily aloof as Nev confronted him about what he'd done to Lucille.

At one point, Jerez was so disinterested in hearing about his own lies that he started playing on his phone, so Nev delivered the episode's best moment and tossed his phone right into the river. In addition to being one of the most satisfying things to ever happen on the show, it also prompted what has to be the best subtitle in the history of TV: "Producer: S***."

After promising an annoyed but still calm Jerez a new cell phone and giving an unnecessary apology, Nev arranged to meet him at his recording session the next day. Unfortunately, the rest of Jerez and Lucille's story is pretty standard for Catfish. Like everything else about Jerez, the recording session turned out to be fake, Nev and Max got him to admit that he had been lying about his Kidd Cole persona, and we heard the emotional story that lead to his catfishing. For Jerez, it was time spent at a shelter and people discrediting his dream of being a music producer.

Cut to a month later, Lucille is happily pursuing a criminal justice degree and Jerez won't speak to Nev, but appears to be continuing his Kidd Cole scam to other people who don't watch Catfish. So if there's one lesson to be learned from this week's Catfish, besides never trusting anyone who claims to know Kanye West, it's to always watch Catfish, or risk becoming a catfishee.