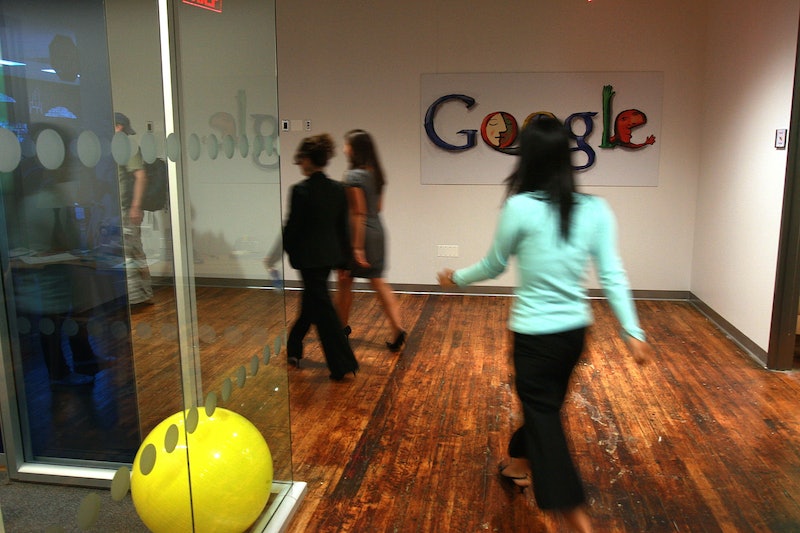 By its own admission, Google has a bit of a diversity problem. On Thursday, the company released a demographic breakdown of its workforce, and it’s not pretty: Women comprise only 30 percent of the company’s workforce, 17 percent of its engineers, and 21 percent of its leadership. While the engineering discrepancy can partially be explained by the disproportionate number of men who obtain computer science degrees, that doesn’t account for the rest of Google’s gender gap, particularly in leadership roles.

"It is really frustrating to be a female in a service department and not be entitled to some of the same amenities that a lot of engineers are."

“We’re not where we want to be when it comes to diversity,” Google’s Laszlo Bock wrote in a statement posted on the company's website. “And it is hard to address these kinds of challenges if you’re not prepared to discuss them openly, and with the facts.”

The fact that Google is both aware that this is a problem and willing to talk publicly about it is undoubtedly a good thing. Nevertheless, such a stark gender discrepancy inevitably affects the work environment at the company.

For example, workers in tech departments (engineers, programmers) require technical capabilities that workers in non-tech departments (sales, transportation management) do not — like extra computer screens and better headsets. That’s not a sexist policy; it’s simply part of the job description. But it becomes a problem when, as is the case, the vast majority of tech jobs also happen to be held by men.

“What you have is an organization filled with men, engineers, who are hired for their talent, are paid the best, and then often given special perks — because they’re engineers, not because they’re men,” Blanche*, a former Google employee, tells Bustle. “It is really frustrating to be a female in a service department and not be entitled to some of the same amenities that a lot of engineers are.”

On one occasion, Blanche remembers attempting to enter one of the campus’ kitchenettes — which she’d been going to for years — only to find that it was now restricted to engineers working on a certain project.

“To look at it from their side, that makes a lot of sense. They’re trying to protect the value of whatever secret projects they’re working on,” she says. “But at the same time, it felt like, ‘Man, there’s even a special cafe for engineers who are working on specific projects?’ And of course, those groups are mostly men.”

Even the departments at Google that are more evenly-distributed between men and women have their share of problems. According to the numbers the company released Thursday, women hold 48 percent of its non-tech jobs, and Blanche says that her department — which she asked that we not reveal — was non-tech and “almost all women.” But the gender gap still managed to rear its ugly head: Blanche says that though very few men worked in her department, most who did were in managerial positions.

“The rational part of me tries to bring in the counterbalancing facts,” she added, “but there’s an emotional impression that’s created by the fact that you’re a female supporting a company of male engineers.”

The problem, of course, extends far beyond Google. Heidi Grutter, the director of social media at My Social Marketing Network, tells Bustle she's witnessed a similar dynamic of men managing groups of women at her various jobs — and that the women have adjusted accordingly.

"It almost seems like when there are large groups of women [being managed by a man], they will internally select one that will rank slightly higher and take more direction from them, even when they are not necessarily their superior," Grutter tells Bustle.

Grutter said that her gender — as well as the fact that she's 5'1" — has caused coworkers to question her credentials at tech jobs, but that their skepticism usually fades once they realize that she's the one explaining "why their computers are running slow, installing all the newest apps, and fixing everything in the office."

"With time, almost every job has realized that it's not about what gender you are, but what you've spent your life being passionate about," Grutter tells Bustle. "I usually just acknowledge the elephant in the room and let everyone know that any doubts they might have will eventually go away."

The underrepresentation of women at tech companies is apparent throughout the industry. The workforces at Dell, Intel, and Cisco all have similar gender breakdowns to that of Google. Even outside of tech, there are frustratingly few women in leadership positions at major companies: As of 2012, only 14 percent of Fortune 500 companies had a woman in an Executive Officer role, and a year later, only four percent had female CEOs. Women comprise only 12 percent of the tech industry’s engineers; nationwide, only 11 percent of Chief Information Officers — usually the top tech job at any given company — are women.

Furthermore, as Google itself noted in its diversity post, only 18 percent of computer science degrees in the U.S. go to women, which puts tech companies in an unenviable position: Either hire a mostly-male engineering team, or hire people who don’t have the relevant college degrees.

“It’s not a good situation, but every time I found myself thinking about how frustrating it was, I realized, hey, this isn’t just Google. It’s not just tech,” Blanche tells Bustle. “There are circumstances that are beyond the scope of the company itself, societal factors, that the company merely reflects.”

Sabina*, who works as a recruiter at an San Francisco-based tech company, tells Bustle that, while her company has "no female engineers to speak of," the management is making an effort to change that.

"We have a couple of women kicking butt in lead roles, and the company is encouraging me to find more women for the team," Sabina tells Bustle. "I appreciate that they're aware of the lack of gender diversity and are trying to fix it without trying too hard. We still hold female candidates to the same standard as males."

Google, too, is attempting to rectify the problem where it can. According to Bock, it’s given more than $40 million to organizations that “bring computer science to women and girls.” Those organizations include Code.org, Black Girls Code, Girls Who Code, NCWIT, the Raspberry Pi Foundation, and Get Schooled. And Blanche says that the general attitude and culture of the company was one that valued equality.

“People [at Google] want things to be fair, and equitable, and they’re not aware of some of the things that they do, or the decisions that they make, that aren’t equitable,” she says. “I don’t think anyone was trying to make it so that more men were in leadership positions, but that's what's happening. It’s a gap between what people want to be the case and what actually is the case.”

*Not her real name.

More like this
5 Ways To Stand In Solidarity With Women In America From The UK
By Sophie McEvoy
How To Fight For Reproductive Rights, Based On How Much Time You Have
By Courtney Young
15 Years Of The iPhone, In Pictures
By Emma Carey
Why You're Seeing Green Bandanas At Abortion Rights Protests
By Lexi Inks
Get Even More From Bustle — Sign Up For The Newsletter