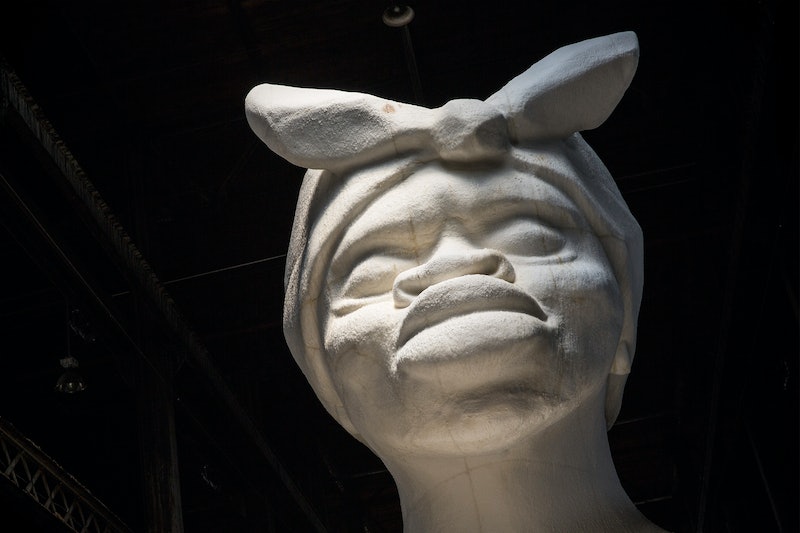 Artist Kara Walker is accustomed to using her impressive installations to illuminate race, gender, and class issues. Her latest masterpiece, “A Subtlety,” also known as the Marvelous Sugar Baby, continues this lineage of elevating consciousness through art. Walker’s exhibit is appearing inside Brooklyn, New York’s Domino Sugar Factory, which is a fitting location, since the Marvelous Sugar Baby underscores the relationship between sugar, slavery, and capitalism. In its review of the installation, the Art Newspaper describes that twisted correlation as a “triangular economy” where “slaves were sold from Africa to the Americas; sugar to New England; and then rum made from molasses was sold back to Africa.”

In a satirical ode to King Henry V’s banquet that includes subtleties, or “sugar sculptures depicting a scene from recent history or a hunt,” Walker erected the Marvelous Sugar Baby. It is a towering sphinx-like sculpture, and as is to be expected, uses art to offer meaning.

Though “A Subtlety” features 15 servants, the most gripping aspect of the art is the centerpiece, a “mammy” donning a handkerchief with her vulva exposed. Walker’s art is meant to provoke emotion and critical-thinking, but the response from patrons, which often includes a sexualizing of the Marvelous Sugar Baby, has unfortunately often missed the point.

Buzzfeed captured multiple reactions to “A Subtlety” in a listicle, and several were explicit. Some patrons mimicked the pinching of the sculpture’s nipples while others covered their mouths in shock. There’s nothing surprising about those responses to bold, black female sexual expression. Black women are accustomed to it.

Instead of recognizing the complexities of black female sexualities that Walker aims to highlight, folks are exploiting, exoticizing, and misunderstanding the Marvelous Sugar Baby. But perhaps that is exactly what the artist expected all along.

Walker’s decision to feminize her sculpture is political, since the mammy has been historically asexualized as a form of protection and a way to create a dichotomy between ideal white women and unattractive, undesirable black women.

It is unclear if Walker anticipated the sexualizing response the piece has received, but in an interview with the Art Newspaper, she said that when creating the installation, “I was thinking about sugar and the associations with desire.”

We understand black women's desire and pleasure in relation to the oppression we’ve endured for centuries. Experiencing sexual terrorism at the hands of white and black men taught black women that our bodies aren’t our own. In response, many black women turned inward, and used specific tactics to ensure survival.

Walker's decision to create a statuesque black female figure who is bold, naked, and fierce disrupts the idea that mammies can't be sexual on their own terms. As writer Kirsten West-Savali details, "Her vulva is exposed as if daring White patrons to look, touch and openly gawk at that which their ancestors took by force in slave quarters and parlors from Mississippi to Georgia."

The Marvelous Sugar Baby challenges the boundaries that tell black women to suppress our right to be sexual and dares audiences to be offended by the brazen display of sexuality.

And offense is often the immediate reaction. When, for example, Beyoncé performed her smash single, Drunk in Love, at the 2014 Grammy Awards, criticism was swift. Fox News anchor, Bill O'Reilly, was so appalled that he called the successful singer a bad role model for teenagers of color. Rihanna also garnered a similar response when she chose to expose her nipples on the cover of Lui Magazine . Bold, black female sexuality is considered a weapon that must be quieted.

In feminizing her sugar baby, Walker is reversing the mark of shame feminist scholar bell hooks has famously said is associated with black bodies. When hooks describes the ways black women are viewed, she notes that we are never viewed as full humans. The fragmenting of black female bodies has historically been used to disenfranchise black women. We become defined and labeled by our body parts, like our asses. Fragmenting reduces black women to the sum of our body parts, and thus, strips us of our humanity.

The Marvelous Sugar Baby is not a silenced figure. She is not reduced to her vagina or her nakedness, which is revolutionary in itself. Though many are still incapable of seeing her outside of her exposed genitalia, Walker sees art as a means of reclaiming our bodies. She is attempting to use art to force people to view black women as whole beings.

More like this
5 Gripping Books To Read From Women’s Prize For Fiction Winner Ruth Ozeki
By El Hunt
Why You're Seeing Green Bandanas At Abortion Rights Protests
By Lexi Inks
16 Novels That Paint A Realistic Portrait Of Abortion
By K.W. Colyard
Juneteenth Is Now A Federal Holiday — Here's What That Means
By Lani Seelinger and Syeda Khaula Saad
Get Even More From Bustle — Sign Up For The Newsletter