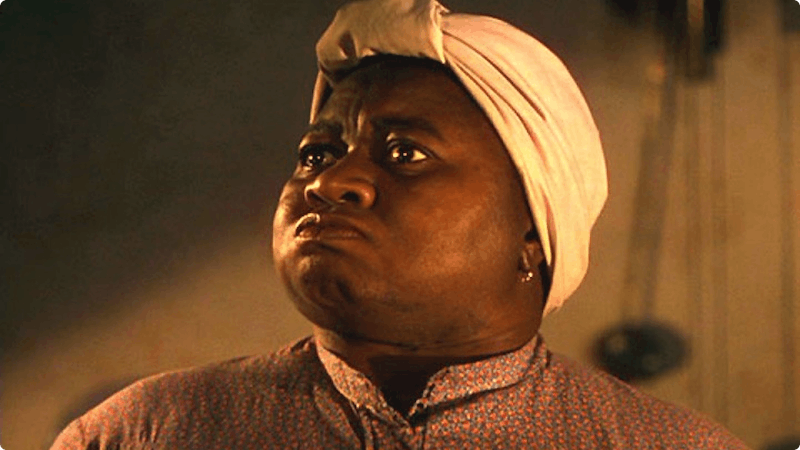 Simon & Schuster recently announced their plans to release a prequel to Gone with the Wind , author Margaret Mitchell’s ode to all things white and Southern. Titled Ruth’s Journey, the book will detail the life of Mammy, Scarlett O’Hara’s maid. Novelist Donald McCaig was encouraged to write the prequel after realizing that Mammy is presented without historical or individual context.

When discussing his motivations for writing the book, McCaig told the New York Times, "Scarlett and Rhett are familiars, but when it comes to the third, we don’t know where she was born, if she was ever married, if she ever had children. Indeed, we don’t even know her name."

It is commendable that McCaig wants to humanize the Mammy character the world was introduced to 75 years ago. However, Ruth’s Journey will serve as another act of erasure if McCraig, a 73-year-old white male, and his publishers don’t reconcile Ruth with the realities of mammies and the atrocities of American slavery.

In her book Mammy: A Century of Race, Gender, and Southern Memory, Dr. Kimberly Wallace-Sanders traces the origin of the word “mammy” to a travel narrative published in 1810. The conceptualization of mammies emerged in the 1830s, according to historian Micki McElya, author of Clinging to Mammy: The Faithful Slave in Twentieth-Century America. Erected as an act of paternalism to present female slaves as devoted, jovial, and unwilling to be free, mammies were an idea circulated to justify the enslavement of black women.

The idea was if black female slaves were content with their enslavement, what was the purpose of freeing them?

Mammies were circulated in literature, like Uncle Tom’s Cabin. It is within Harriet Beecher Stowe’s 1852 book that the aesthetic skeleton of mammies is most symbolic. Beecher-Stowe described Aunt Chloe, the book’s mammy, as:

A round, black, shiny face is hers, so glossy as to suggest the idea that she might have been washed over with the whites of eggs, like one of her own tea rusks. Her whole plump countenance beams with satisfaction and contentment from under a well-starched checkered turban, bearing on it; however, if we must confess it, a little of that tinge of self-consciousness which becomes the first cook of the neighborhood, as Aunt Chloe was universally held and acknowledged to be.

Mammies were often presented as the “anti-thesis to white womanhood,” according to film historian Donald Bogle. This was purposeful. In a plantation environment where female slaves were often subjected to sexual terrorism, mammies were specifically constructed as unattractive to create the idea that they were non-threatening to the mistresses of the plantation.

Additionally, mammies were depicted as protective of their white families and the children they were tasked with providing for. As Wallace-Sanders notes, “the slavery-era mammy did not want to be free.” She was too busy caring for the children of her mistress to be concerned with freedom.

Here’s the jig though: the mammy was never a real figure. She was a “figment of white imagination, a nostalgic yearning for a reality that never had been” according to Dr. David Pilgrim, a professor of sociology at Ferris State University.

Catherine Clinton, author of the Plantation Mistress: Woman's World in the Old South, echoes this sentiment. In her book, Clinton highlights that white Southerners created the mammy figure “within slave society in response to the antislavery attack from the North during the antebellum era, and to embellish it with nostalgia in the post-bellum period.”

Clinton then concludes that prior to the Civil War, mammies did not appear because they did not exist.

Though the mammy has been circulated in imagery, like Aunt Jemima’s face on pancake boxes, and mammy figurines can still be purchased, mammies were created as an illusion to a time that never was.

With the expression of pious devotion and support for mammy, proper southerners could convince themselves and others of their own goodness. In a sense they were attempting to redeem themselves for the wrongs that had been done because, ‘I loved my old mammy.'

White folks so believed that the mammy loved them that they attempted to have a mammy statue erected on the Mall on Washington in 1923. The measure failed in Congress, after civil rights organizations protested, but the enduring idea that the idealized construction of mammies was real is one of America’s grandest failures.

Economic discrimination during Jim Crow forced black women into roles as domestic workers, just as the slave economy forced women in the fields and into the homes of their enslavers. None of this was done willingly or with happiness. Being a mammy was an act of survival, not an act of pleasure.

America prides itself on exceptionalism, reconciliation and progress, which historian Gerde Lerner identifies as “selective remembering.” Mammies are often swept in this tornado of misremembering in the name of post-racialism just as they were caricatured during Reconciliation, and continue to be circulated as a controlling image. Choosing to create a dimensional identity for Gone With the Wind’s Mammy can be either a reinforcement or a disruption of the mammies narrative.

If McCaig relies on the white imagination to create a background for Ruth, this book will be a failure. If he paints Ruth as Mammy, this book will not do justice to the women history has reimagined. If it doesn’t delve into how black women were often raped and impregnated against their will, treated as breeders, subjected to unimaginable violence and forced to care for children that were not their own, Ruth’s Journey will be just another volume in America’s library of selective remembering.

More like this
30 Books To Read This AAPI Heritage Month
By K.W. Colyard
Yomi Adegoke On The Offline Diaries & The Power Of Representation
By Jessica Morgan
16 Novels That Paint A Realistic Portrait Of Abortion
By K.W. Colyard
How To Fight For Reproductive Rights, Based On How Much Time You Have
By Courtney Young
Get Even More From Bustle — Sign Up For The Newsletter