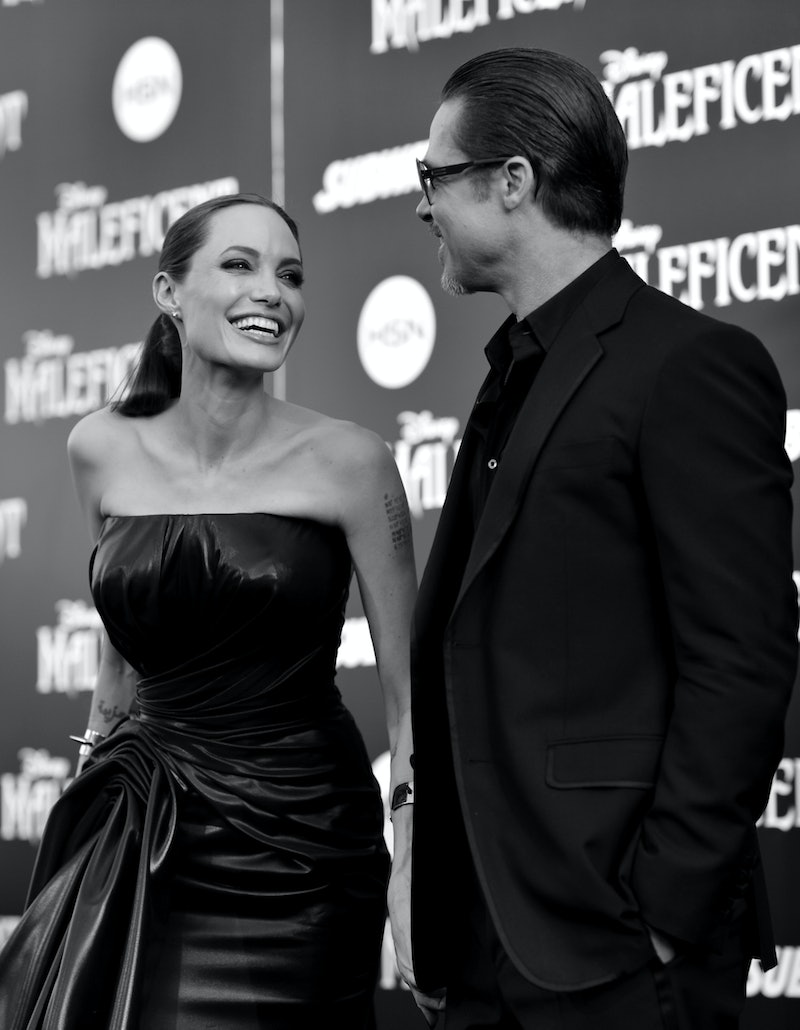 Angelina Jolie is leaving little to the imagination after revealing that she took her Maleficent horns home for a little horn-y fun. "I'm a sucker for that kind of [clothing]. I think a lot of people know that — I think it's a pretty good costume," she dished to Entertainment Tonight Wednesday. What a thing for her kids to learn about their mom when they Google her name, right? But, unfortunately for Brangelina's brood of children, this isn't the first time Jolie or fiancé Brad Pitt has talked about their sex life. The two are surprisingly open and frequently share their intimate details with reporters. So besides the new costume-play we've learned about, here's everything we know about the Jolie and Pitt's relationship behind closed doors. Hey, we're not prying — they told us!

THEY HAVE SEX ANYWHERE AND EVERYWHERE

In a 2009 interview, Pitt revealed that the stone grotto behind the waterfall in their pool (hello Playboy Mansion!) is "a great place for sex." So enjoy splashing around there, Jolie-Pitt children!

But that's not the only hidden spot the couple hooks up in. "We got a few special places," Jolie mysteriously elaborated.

THEY LOVED HAVING PREGNANT SEX

While some couples struggle to keep the magic alive months after dating, Pitt and Jolie had passion even when she was pregnant with their twins, Vivienne and Knox. "It's great for the sex life. It just makes you a lot more creative," Jolie said in 2008. "So you have fun, and as a woman you're just so round and full."

In May 2011, Jolie praised her partner and hinted about their pleasure-filled love life. "Physically, he’s a real man. In all things that it means," she said of Pitt.

ANGELINA JOLIE IS A "BAD GIRL"

Pitt gleefully over-shared again in February 2012 when he proudly said of Jolie, "She’s still a bad girl. Delightfully so. It’s not for public consumption.”

(If it's not for public consumption why does he insist on telling us?)

Jolie had previously confirmed this dark sexy side of herself in November 2011, telling 60 Minutes that she has an inner bad girl that "belongs to Brad."

Pitt really loves to brag about Jolie's bedroom habits and also opened up in October 2012, telling the public that Jolie is "still naughty in sexual ways." He elaborated saying, "I mean, this is not exactly an Angel of Mercy."

I guess those Maleficent horns will come in handy when she's playing this devil in the bedroom.

More like this
Bennifer's Relationship Timeline Now Includes A Grammy Date Night
By Jake Viswanath
9 Photos Of Celebrity Couples & Unexpected Duos At The 2023 Grammys
By Jake Viswanath
The History Of Taylor Swift's "All Too Well" & What The Lyrics Actually Mean
By Jake Viswanath
Vanessa Hudgens Is Reportedly Engaged To Cole Tucker
By Jake Viswanath
Get Even More From Bustle — Sign Up For The Newsletter
From hair trends to relationship advice, our daily newsletter has everything you need to sound like a person who’s on TikTok, even if you aren’t.