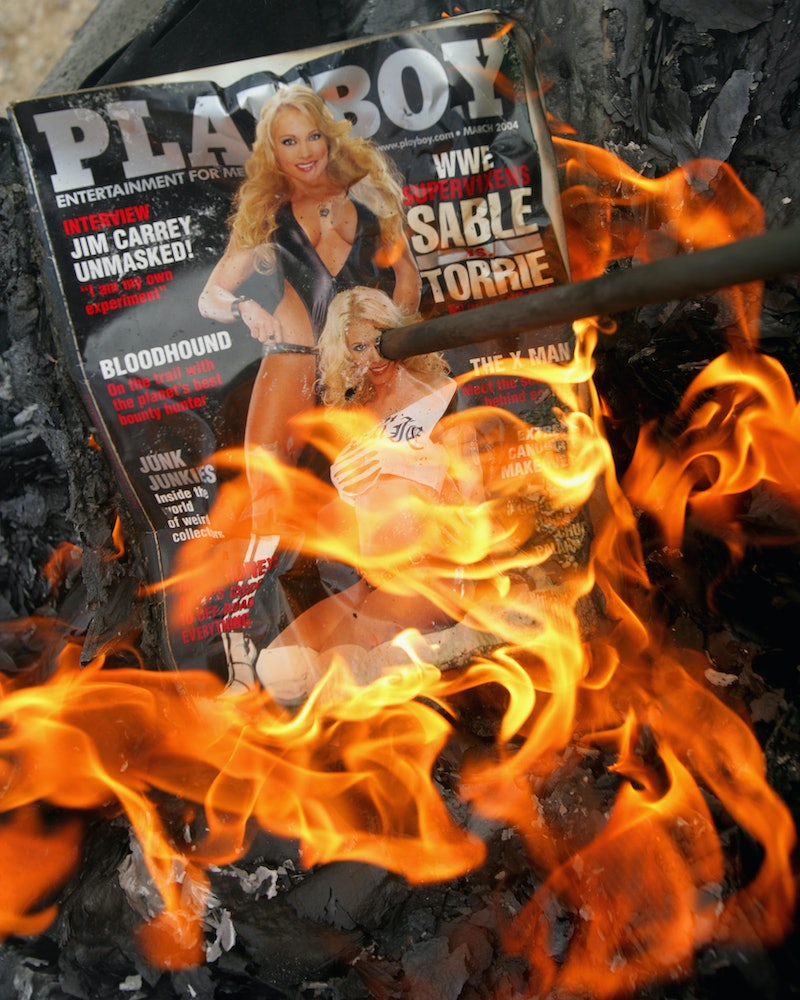 In news that will surprise pretty much no one who's been paying attention, it turns out that men who read magazines that objectify women are less likely to respect women's sexual boundaries in the real world. I mean, some of us have been saying there's a connection there for a long while, but now there's science behind it. Gotta love science.

According to a study published in the Journal of Sex Research by researchers at Washington State University, reading magazines like Playboy and Maxim is "significantly associated with lower intentions to seek sexual consent and lower intentions to adhere to decisions about sexual consent." In other words, men who read magazines that don't respect women also don't respect women.

I'm going to point out again that this really shouldn't be surprising. In fact, it's kind of common sense.

Of course, the study still doesn't prove that magazines are making men less respectful of women's autonomy — after all, it could also be the case that men who are already less inclined to respect women are drawn to these types of magazines. Still, that's not exactly a ringing endorsement of men's magazines, either; "We are naturally appealing to men who don't treat women with respect" is probably not a tagline people would want to use for their product.

Still, whether magazines foster these attitudes, or just support them in men who already have them, it's clear that the link between disrespectful magazines and disrespectful men does not only exist in the fevered feminist brain. As Stacey J.T. Hust, lead researcher for the study, points out, "We learn a lot about how to act in a relationship by what we see and read in the media. Bad information can lead to bad decisions.”

And since we can assume that "bad decisions" in this case refers to violating someone's sexual boundaries, that makes this a big deal. Women's right to decide when and where and how and with whom they engage in sexual activity should never be trampled on, ever. And yet, sexual assault is so common in our society, it's clear that lots of men aren't getting that message.

Feminists have been saying for years that we live in a rape culture, and part of that means that the ways women are depicted in the media effect the ways in which women are treated in real life. Maybe magazines only reinforce the message men get from other parts of the culture, but at a time when women are speaking out more than ever about the oppression we face in this world, it's high time people stopped ignoring the ways in which objectification leads to actual harm.

More like this
Here’s Your Daily Horoscope for December 5, 2022
By Mecca Woods
An Open Letter To The Person Who Bought Steve Jobs’ Birkenstocks For $218,000
By Ginny Hogan
20 Christmas Movie Quotes That'll Get You In The Holiday Spirit
By Alexis Morillo
21 Absolutely Adorable Christmas Gifts For Dogs
By Carolyn Steber
Get Even More From Bustle — Sign Up For The Newsletter