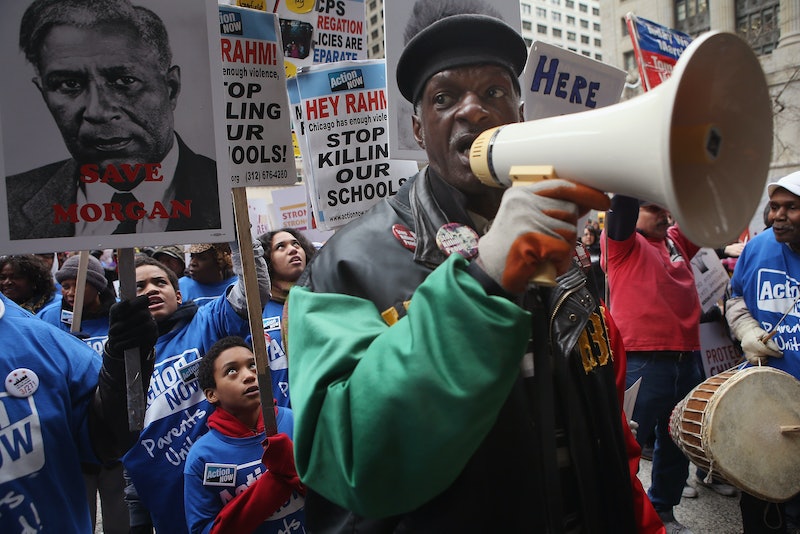 Wednesday's Chicago Sun Times headline says it all: today marks "the last day of school—ever—at 28 Chicago Public Schools." The remaining 22 schools slated for closure will have their last days at the beginning of next week.

Earlier this year, Mayor Rahm Emanuel and the Chicago Board of Education announced a plan to implement the largest mass school closing in the history of the United States. However, many of the schools slated for closure—and the communities they belong to—have refused to go down without a fight.

Take the South Side community of Englewood, which organized a large protest against the closing of their local elementary school Clara Barton Elementary, and was largely successful. Two full-time student-teachers at Barton, both in their mid-twenties and about to graduate from their teacher-training education programs in Chicago, joined in these community efforts. They asked to not have their names disclosed, which is indicative of the heated political climate around education in Chicago. This article will refer to them as Elli and Clara.

In a joint interview, Elli and Clara said they believe that what made the Barton community’s efforts at fighting the turnaround particularly effective were the protests held downtown at Chicago Public School (CPS) Headquarters.

"We all had scripts prepared in advance, so we were able to present a unified message," Elli said. "We also had a really large turnout at meetings - around 200 people," Clara added.

Barton originally showed up on the closure list, but then got slated for turnaround the first week of March. That meant the school was no longer being threatened with closure, but was instead likely to have its entire staff replaced. Teachers and parents joined together in an effort to protest, and in the end, they were the only school on the turnaround list that was spared.

But Elli and Clara don’t see this decision as a total victory. Sure, they get to keep their jobs—for now.

"It feels like we’re going to be under the microscope for next year," Clara said. "It's frustrating because organizations like Academy for Urban School Leadership (AUSL), which get most of their funding from private donors with almost no background in education, are looking for a quick fix. But as teachers in these schools we know that educational reform takes time, and they're not giving us the time to allow our reforms to start taking effect."

Meanwhile, in Hyde Park, a community has fought a less successful battle to keep their local middle school open. Irami Osei-Frimpong, a graduate student living in the neighborhood, went to the public meeting concerning the closing of Miriam G. Canter Middle School, and made a short film about his experience.

Osei-Frimpong argues there's a disconnect between CPS and the families and teachers they're serving. He says the blanket formula used by CPS to determine which schools to close has "been derived and applied to Canter Middle School without talking to members of the local community or the local school council."

"Schools are neighborhood centers and anchors. It's a place where parents in the neighborhood meet other parents to join together in the task of raising new community members," Osei-Frimpong says. "Relationships between students and teachers can't be replicated in any short time frame. It will take time to build up the same trust between students and the adults at their new schools. The fundamental problem in American education is that we’re bad with teaching poor kids...applying a neoliberal approach to education reform like Rahm Emanuel is doing doesn't do anything to help fix those problems."

In the end, Cantor Middle School is not being closed this year, but will slowly be phased out and closed after the end of the next school year. The closing of Cantor, and eventually 49 other schools, will mean big upheavals for many Chicago communities, which for the most part are the very same communities are already plagued with high crime and low income rates.