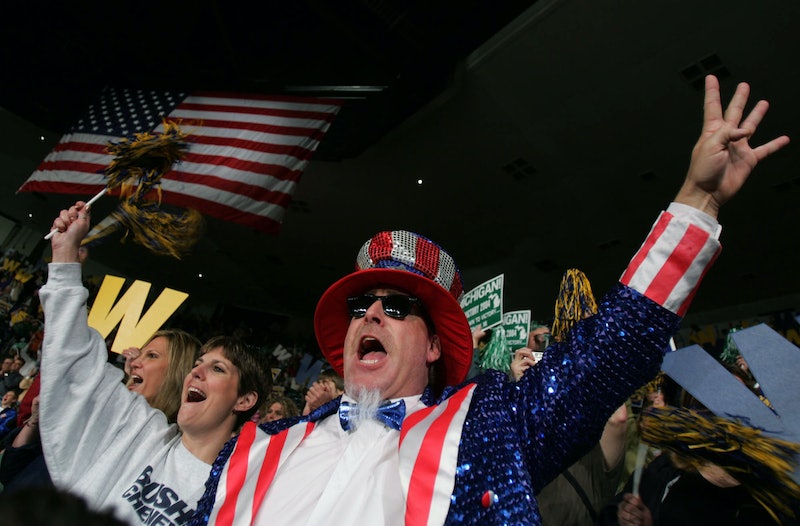 For some, the 4th of July celebrates one sacred ideal and one sacred ideal only: Our right to take the day off from work. Yes, on Independence Day, we celebrate our right as Americans to run around in bikini tops while setting sparklers on fire ... usually while drinking. Just conjure the words "Fourth of July" and all kinds of images are sure to come to mind.

I know that when I think about the Fourth of July, I think about a lot of things: Obnoxious themed Old Navy t-shirts from the '90s; fireworks tents cropping up in parking lots; red white and blue popsicles; and of course, funnel cake. Yes, you can eat funnel cake any time of year, but it just tastes like freedom on July 4th, right? But where do all the most famous 4th of July icons come from? And why did they catch on? We decided to find out.

So instead of mindlessly singing the national anthem and grilling up a few hot dogs this year, you can do the same thing, only while totally informed on the origins behind your favorite Independence Day icons. Read on to impress your entire family with your mad 'Merica knowledge. You're welcome.

Everyone who's been to fifth grade can explain to you what the stars and stripes on the American Flag symbolize, but I can't leave out such an essential decoration for any Fourth of July bash, can I? The stars represent the states, the stripes represent the original 13 British colonies. And if this was news to you, that's okay too — I didn't pay that much attention in fifth grade, either.

And as for red, white, and blue? Thanks to a book called Our Flag, written by none other than the House of Representatives, we have answers! White symbolizes purity (duh), Red symbolizes hardiness and valor, and the blue means "vigilance, perseverance, and justice." See? 'Merica.

I don't really need a reason to light fireworks on the Fourth of July other than they're pretty to look at. Yeah, there are other times you can see a fireworks show — Disney World, a baseball game, New Year's Eve, and the occasional party where one of your friends had a few too many beers. But there's actually a reason why we're so keen on lighting up the sky on this day of the year.

Fireworks were first lit to celebrate the occasion on July 8, 1776 — that's right, they were late — and may have actually been used to mock England more than they were used to celebrate America's independence. The next year, fireworks (and gun shots) were used once again, and as you can probably deduce, the idea caught on.

We know Uncle Sam is pretty much freedom incarnate (he wants you, remember?). But otherwise, the guy's a pretty dodgy character who has a penchant for Americana that rivals even Lana Del Rey. However, according to a very old World War I poster, July 4th is actually Uncle Sam's birthday. Are you shocked? I'm not.

Let me blow your mind for a second: Uncle Sam's initials are US. During the War of 1812, anytime soldiers saw barrels of beef stamped with US, they started to refer to them as belonging to a guy named Uncle Sam, and it immediately became a widely-used nickname for the United States government. In the 1870s, an artist named Thomas Nast created Sam as we know him today, and the rest is literally history.

The saying goes "American as Apple Pie," but why? Well, apparently apple pie caught on because for American settlers, pie was easy to make — fillings were everywhere, and pies were cheaper to make than bread. In that way, pie became a symbol of the abundance of food and opportunity that could be found in America ... and also, they're yummy.