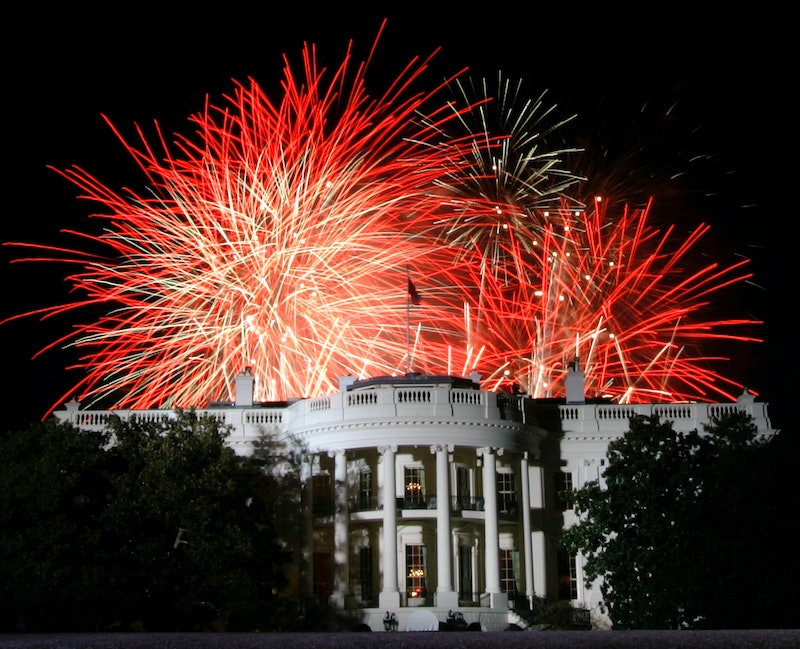 Everyone's favorite excuse for a party — The 4th of July — is upon us. In addition to blissfully falling on a Friday this year (hello, three-day weekend!), the 4th is certainly a day worth celebrating in its own right. It's a day to celebrate our country's storied history, our independence, and (all cynicism aside) our bright future. It's a day for reflection, for family, and for barbecues. But most importantly, it's a day for blowing things up, because...'Merica? That's right, it's a day for fireworks.

Between cookouts with family and friends, kids running dangerously with sparklers (which are sharp, pointy and metal, like scissors, but on fire...not sure how that slid by), and grown women trying to pass off American flag bandanas as tops, there are a lot of other traditions out there to contend with — but the firework show is the most cherished Fourth of July tradition of all.

All around the country, epic Fourth of July celebrations with equally epic fireworks displays will be happening this year. Even if your state allows residential fireworks displays (many don't, so check the law where you live to find out if your Roman Candles are A-Ok or totally off-limits), they'll pale (quite literally, in fact) in comparison to a professional show.

So, without further ado, here's your official Bustle guide to the best of the best fireworks shows of 2014. Find the one closest to your city, make a day trip of it, and get your 4th on with your fellow fireworks-loving patriots.

The Macy's 4th of July Fireworks show is one of the most amazing displays in the country. After a few years at the Hudson River (it moved there in 2009), the display is returning to the East River this year for a spectacular display over the iconic Brooklyn Bridge. It's free to watch — if you can snag a good spot. The show doesn't start until 9 p.m., but locals recommend staking out a spot to watch as early as 5 p.m.

Americafest at the Rose Bowl in Pasadena is more than just a fireworks show — it's a full-on festival of fun. The day's events kick off around 2 p.m. and the day is filled with live music and events. This year's event, the 88th annual, will also feature a motorcycle stunt show. It all leads up to the fireworks finale at 9 p.m. This one isn't free to the public though; General Admission tickets will run you about $17.

What better place to celebrate our nation's birthday than in our nation's capitol? Washington, DC knows how to do 4th of July right, with a massive, free firework show on the National Mall. The sky lights up at 9:10 p.m., but as with all of the big shows, you should plan on getting there early to snag a good seat.

New Orleans' take on 4th of July will appeal to those looking for a little extra adventure with their fireworks show. The annual Go 4th on the River event features dueling barges that battle it out on the Mississippi River every July 4th. Bring your radio to to tune in for updates on the battle (or listen to the simulcast online from almost anywhere in the United States).

Another big bash in one of America's most historic cities, the Boston Pops Fireworks Spectacular is one of the country's biggest Fourth of July celebrations, attracting more than 500,000 spectators. They take their July 4th celebration seriously in Boston — you can visit July4th.org for help planning your epic visit, right down to a map that will help you camp out with other like-minded partiers (avoid the family sections if you're planning to get rowdy).

Philadelphia's Fourth of July bash certainly has the longest name, if nothing else. (Luckily, it has plenty else.) The Wawa Welcome America Fourth of July Jam Concert and Grand Finale Fireworks show is one of the nation's biggest. The fireworks show lasts for 15 minutes, but the concert is the festival's big draw — it's the largest free outdoor concert on July 4th, making it the perfect destination for music-lovers.