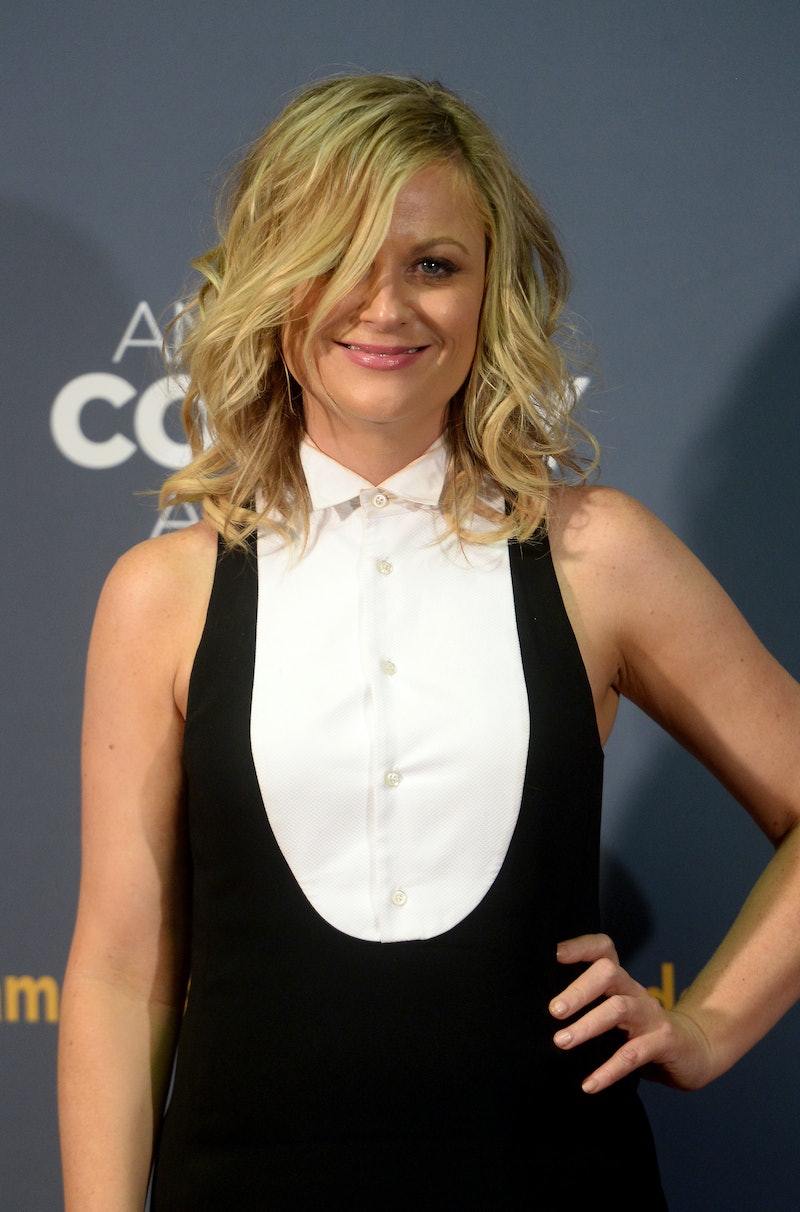 There's an old saying: Where Tina Fey goes, Amy Poehler follows (well, something like that). A day after This is Where I Leave You star Fey appeared at BookCon to discuss her role in the September film, her second half arrived at New York's Javits Center to discuss her own upcoming project: Poehler's just-announced memoir, titled Yes, Please . During a conversation with fellow comedian and debut author Martin Short, Poehler discussed her forthcoming transition from everyone's favorite funnywoman to — hopefully — everyone's favorite new writer.

"I'm writing a book in what feels like the middle of my life," she said, adding that she feels too old for "cute," too young for "wisdom."

Poehler discussed the inspiration for her book's title, saying that she was motivated by the improv rule of always saying yes.

"The good things that've happened to me is because I said, 'Yes, please,'" she said.

Most importantly, she joked, "It's a title I can tell my children."

Much of the memoir describes Poehler's time at Saturday Night Live ("It's like a comedy college"), including her inauspicious beginning; the comedian joined the show just before the September 11 attacks, when people "were talking about if they'd ever laugh again."

"It's nice to start SNL at a time when everyone's saying comedy is dead," she deadpanned.

Poehler had had an "atypical audition" for the show that must've appealed to Lorne Michaels and the staff, but she credits her casting to another source.

"Tina was already running the machine there," Poehler said. "I got the job like most people do — I just slept with the head writer."

Poehler described the show's reluctance to do political sketches for several years after 9/11, and the relief she felt at finally getting to do her now-famous impressions of public figures like Hillary Clinton.

That "was one of the rare times performing something where I was like, Oh, this is really big," Poehler said.

Short questioned her about how she, a mother of two, achieves her work-life balance.

After first joking that she "conserves energy like a bear," Poehler said that the truth is that she struggles, "all day, every day."

"I think every working mother does," she said, adding that she's lucky to be able to afford child-care providers and doesn't "take it for granted."

Still, there've been a few times throughout her career that she's found the balance a bit harder than usual to maintain. In Yes, Please, Poehler describes a week in 2008 during which, nine months pregnant, she was set to do an SNL skit with Jon Hamm. Two days before her delivery date, her OB/GYN died; a "hysterically crying" Poehler received the news on the SNL set, dressed in Mad Men garb and in front of all her co-workers. Everyone else froze, but Hamm walked up to her, took her arm, and said, "this is a really important show for me. You need to get your shit together."

"I laughed so hard I probably peed," Poehler recalled.

Later in the coversation, she revealed more details about her book, including that there's a chapter on "real, true" sex tips — "please don't make it last so long, we're really tired" — as well as one about the reasons she's not on social media. Others are: She Doesn't Cry Enough, He Seems Gay to Me, and Don't Worry, I Don't Want to Fuck Your Husband. In the last, she talks about the effects of her divorce, which included, as she described, "a lot of people hitting on me."

Still, don't expect too many intimate details from the memoir — "I don't like people knowing my shit," Poehler joked.

"I find it relatively easy to not overshare," she said, adding that Yes, Please is "not about dishing dirt."

Mostly, she said, it's about "telling the truth about what I feel."

The memoir should be a broad-reaching title for one big reason, according to the author: "If you're a person who feels at an intersection, in the middle, I think that this book may speak to you."

More like this
Prince Harry Incorrectly Recites Christina Aguilera’s “Genie In A Bottle” Lyrics
By Jake Viswanath
Meghan Trainor & Daryl Sabara Are Expecting Their Second Baby
By Jake Viswanath
Jessica Simpson On The Time She Was Pursued By A Backstreet Boy & An *NSYNC Member
By The Editors
We’ve Entered The Hot Boy Reader Era
By Samantha Leach
Get Even More From Bustle — Sign Up For The Newsletter
From hair trends to relationship advice, our daily newsletter has everything you need to sound like a person who’s on TikTok, even if you aren’t.