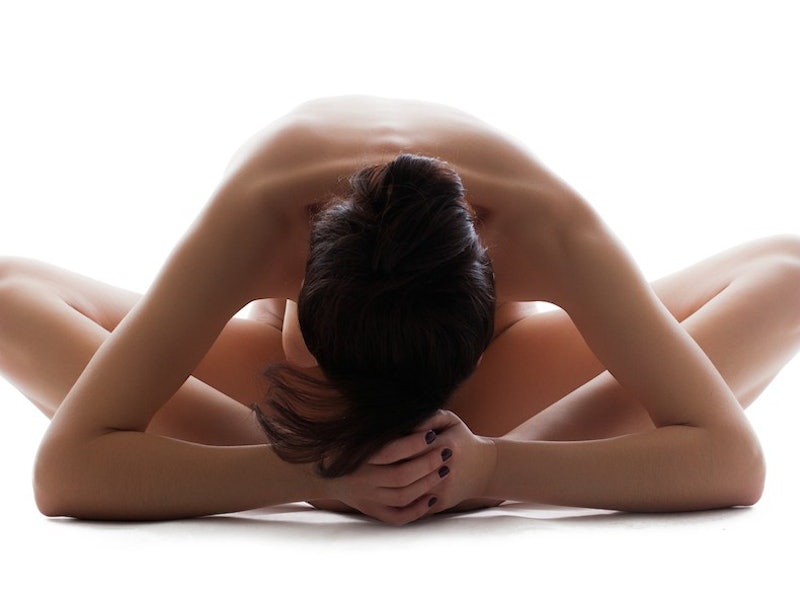 Confession: I'm the girl who still changes her bra over a towel in the gym locker room. I know, I know — we all have the same parts. Still, I've always felt a little weird stripping in front of strangers (or, in the case of the last gym I belonged to, my coworkers). I'm even loath to work out in just a sports bra — there's a time and a place for taking it off, and I don't always feel like the gym is that place.

But I'm all for stepping out of my fitness comfort zone — so, when I heard a studio was teaching naked yoga in New York City, I felt like I had to give it a shot. I applied for a co-ed class at Bold & Naked (you have to be approved before they'll share their address), showed up for my session and somewhat reluctantly shed my clothes, and set up my mat in the back of the room. Yep, everyone was naked. Besides the lack of Lululemon logos, it was just a regular yoga class — one that felt particularly liberating. Before you go, here's what you need to know:

1. Getting undressed is the hardest part.

I don't think my heart has ever pounded so hard before a workout. When I got in the elevator with two guys who were clearly going to the same class, all I could think was oh, my god, they're going to see me naked in five minutes. There's no locker room; everyone just gets naked in the middle of the studio's lobby and stashes their clothes in a cubby. It was like ripping off a Band-Aid — I did it as quickly as I could, made eye contact with no one, and hustled to my back corner spot.

2. Everyone will be naked.

There's no option of starting in your underwear and stripping down once you're comfortable — everyone walks in to the studio without a stitch of clothes, so everyone starts out on the same level. It may be equalizing, but it's also a little terrifying. There's a certain level of vulnerability in baring your naked body to a room full of strangers, but you just sort of have to suck it up and do it.

3. There is a reason for this.

Naked yoga can seem gratuitous, especially when you consider how little you wear during bikram. But, you know how yoga instructors always tell you to figuratively leave behind everything you brought with you and just focus on the day's practice? That's a lot easier to do when you literally have nothing with you. Naked yoga isn't just about being naked — it's about accepting your body and being confident in your own skin.

And penises and vaginas and butts — sometimes, disconcertingly close to your face. But the vibe in the room was pretty far from sexual. (Fair warning: Bold & Naked's website does address the possibility of erections — yoga is all about blood flow, after all.)

I tried to choose a spot towards the back so I could observe rather than be observed — I figured I could keep my eyes on the floor, and not worry about anyone else's eyes. No such luck. I definitely felt people glance over at me, but luckily, there were no creepy, pervy vibes. I like to think they were checking out my awesome side crow pose rather than my lady bits.

6. You don't need to have a perfect body.

Of course, I didn't actually keep my eyes on the floor the whole time. Just like in regular yoga, I found my eyes wandering to the other people in the room — to compare positioning, because I didn't know where else to look, whatever. And there were all types of bodies, from big and tall to small and super muscular. There were uber-yogis who could contort themselves into positions I can only imagine and newbies who could barely touch their toes. But everyone, no matter what shape or ability, seemed blissfully unaware of their nudity.

7. You will be hyperaware of your body.

I've never so clearly felt every drop of sweat rolling down my back or my thighs. But, without even the thinnest layer of spandex over my skin, I also felt like I could push every stretch a little deeper than I would in a normal class.

8. But you will eventually forget about being naked.

Maybe it's only for a minute, or maybe for a whole Vinyasa sequence. But, at some point during the class, I realized I didn't care at all that all my private parts were on display. Instead, I felt incredibly proud that I clearly had the best headstand in the group (and got the compliments to prove it). By the time we finished savasana, I felt like I could take my time getting dressed rather than running to my cubby — a major one-eighty from how I felt at the beginning.

9. You will feel awesome about your body.

I'm no exhibitionist, but once I got over my nervousness, there was a sort of exhilarating thrill to the class. Whenever I caught a glimpse of my body, I could see every — and I mean every — muscle flexing and stretching. It made me feel pretty badass, to really see what my body was capable of. There was a certain kind of freedom to the practice, and I left not thinking about how crazy it was to do yoga naked, but, instead, about what an awesome yoga class it was. That said, I will leave you with this: there are some views of the body that just aren't meant to be seen sans clothes (cough, downward dog).