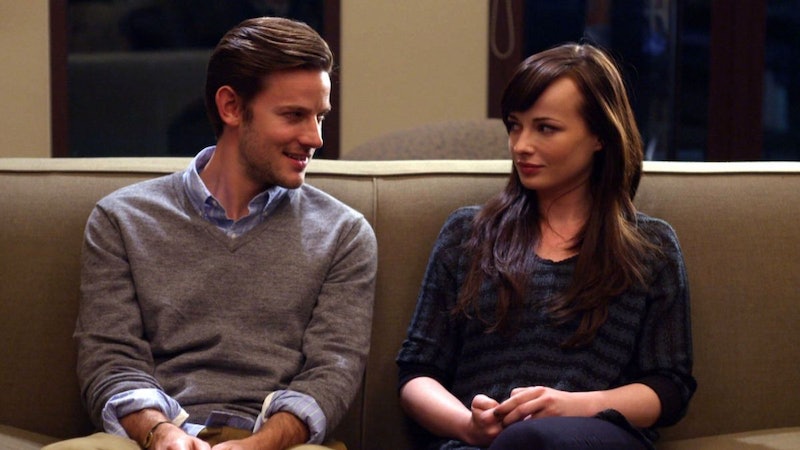 Poor Jenna Hamilton. The protagonist of MTV's Awkward has a slew of these hot guys to make out with, but they all inevitably bring a whole bunch of drama along with them. I guess a girl can't have everything. If she could, Jenna would still be dating Matty, Jake, and her new beau, Luke.

After all Jenna's guy issues from last season — not to mention yet another love triangle involving Jenna, Matty, and Colin — Jenna finally appeared to choose "herself" amidst all of the high school drama. That lasted for only a few episodes, but at least Jenna's latest rebound seems like a pretty standup guy. Jenna fell for her tour guide Luke during a visit to one of her top choice colleges for next year. The two bonded over literature and soon fell into bed, guilt- and worry-free. (A good sign, especially for Jenna, who hasn't always had the greatest hookup experiences in the past.)

Luke definitely seems like a keeper. Despite their age difference, he seems to be pretty understanding of all of Jenna's baggage. After that heinously embarrassing speech Matty gave in the Season 4 episode "Crowning Moments" (in which he disclosed that Jenna had a pregnancy scare in front of the entire school). Luke's response was to bring Jenna flowers. Flowers! (Is there anything that signifies maturity more than flowers? I think not.)

Luke is proving to be the anti-Matty — as in, totally and completely drama-free. In the most recent episode "After Hours," Luke was totally chill about Jenna and Matty going to a pre-planned concert with one another, despite all of the weirdness that happened between Jenna and Matty. I don't know how well I would deal with my newest love interest heading off to a concert with someone they clearly have so much emotional baggage with, but I guess that's part of what makes Luke such a good guy for Jenna — there's not a jealous bone in his body. After all the drama, I'm happy that Jenna has finally found a good guy... even her heart is still kinda-sorta with Matty.

Or so I thought. Before I continue to wax poetic about Luke being oh-so-good for Jenna, let's back track and check out this week's Awkward promo. Specifically, what's going down at the 10 second mark:

So, that's Luke. And that's his bed. And that's some random girl on top of him. A girl who is definitely not Jenna. Could this be the end of Jenna & Luke? Maybe... unless the promo is just there to trip us up into thinking that Luke is cheating on his high school-aged girlfriend. Considering that the image does sort of look like a back massage (as opposed to an illicit make out session) there's a chance that this encounter was very innocent... and possibly paid for. (Five bucks says that Luke is getting a post-finals back massage with a gift card his mom gave him.)

According to TV.com, we'll see Jenna visiting Luke in college in Season 4, Episode 8, which is titled "Prison Breaks." (A hint that Matty and Jake are getting out of jail in this one?) No word yet on whether this is Jenna's last encounter with Luke, but something tells me that finding a girl in his bed won't be the end of these two. According to Awkward showrunners Mike Chessler and Chris Alberghini in an interview with Yahoo TV, Luke represents something really important to Jenna: impending adulthood.

“Luke represents Jenna thinking ahead about what she’s going to be like in college,” Chessler says. Alberghini adds that, Jenna sees Luke as an adult -- and her impending senior year of high school sounds like the perfect time to start exploring her adulthood. And if that is the showrunners' intention, it seems unlikely that these two will call it quits after just three episodes.

Full confession here, guys: At the end of the day, I'm still squarely on Team Matty. But until both him — and Jenna — do some growing up, I'm glad to see Jenna with a more mature, older guy. I'll be happy to see this relationship stick around for a while.