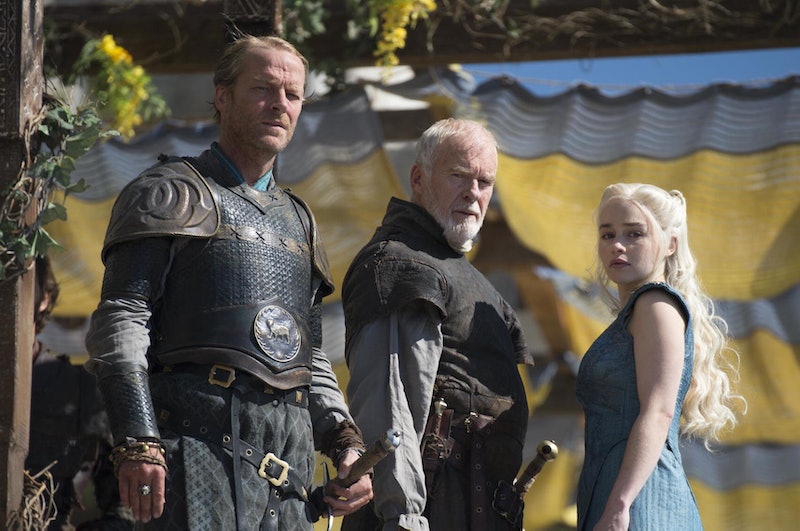 Folks who've been solidly riding the Jorah Mormont train to romance were sorely disappointed Sunday night when Daenerys banished Jorah on the new Game of Thrones episode. And while most of us knew that Dany only had eyes for Daario, there is always that twinkle in Jorah's eye. He loves Dany and has protected her countless times though it's clear she'll never return his hopeless pining. But now, that twinkle and its master have been banished and there's a part of us that already misses the poor, handsome older man. Will we ever see Jorah again? Or will he die at King's Landing?

After all, the reason Dany banished him in the first place was because Tywin Lannister sent along a copy of Jorah's pardon from all those years ago. The pardon proved that Jorah — who'd been banished by the folks Dany and the Targaryen refer to as the Usurpers (the folks who wrested King's Landing from her family) before the beginning of the series — had been acting as an informant, telling Robert Baratheon all about Dany's whereabouts, her marriage to Khal Drogo, and every other little detail from Season 1 that you can't remember. Eventually, he stopped informing on Dany — right around the time that he keeps her from drinking poisoned wine — but the deed is done. He betrayed her and Khaleesi does not put up with that shit.

So now, he's heading into the desert on a horse with no name and it's looking pretty grim for Ser Jorah. However, a quick look at the books tells us that if HBO knows what's good for them, they'll be serving up a lot more Ser Jorah in the future.

You've been warned: Book spoilers from this point on.

According to the books, Jorah doesn't exactly make it to King's Landing to see if they'll accept his pardon, as Daenerys commands. After A Storm of Swords, the book in which Dany sends him packing, Jorah mopes around on the road to Volantis for most of A Feast of Crows. Dude's gotta mourn his life for a bit, right?

In the later books, he goes to a brothel to hire a lady of the night with hair like Dany's (de-ni-al) and runs into Tyrion (who, by the way, isn't actually dead after Oberyn's face was smashed in during Tyrion's trial-by-combat — huzzah!) and decides he can offer Tyrion to Dany as a token of his devotion. Along the road, they wind up meeting up with the Second Sons and joining up. The problem is that the Second Sons are mercenaries contracted to take down Dany's army of Unsullied. Jorah's solution? Kill the guy who gives the order to take down Dany's army.

That's where we left off, but it's looking like Ser Jorah is, at the very least, doing everything in his power to convince the Mother of Dragons that his big mistake was a one-time thing. And in faith, I'm pretty sure this guy would rip out 10,000 men's throats with his teeth if he thought it would convince Dany to speak to him again.