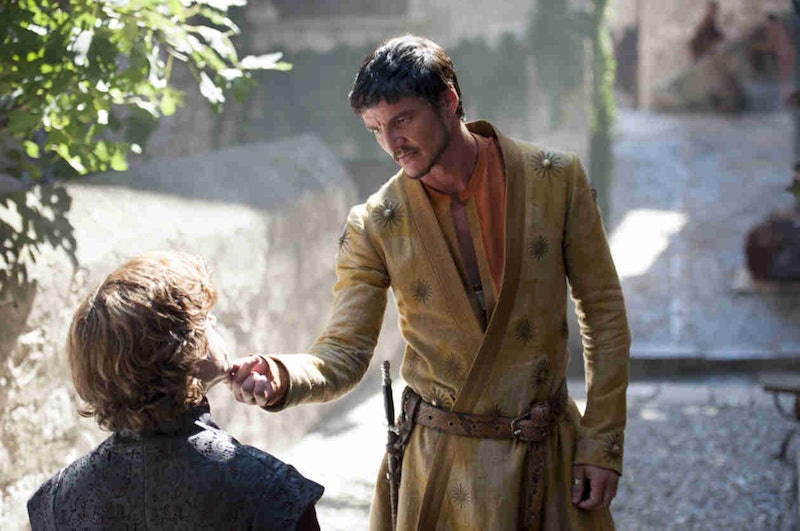 If you haven't seen Sunday night's Game of Thrones , I suggest you slowly back away from your computer. The Internet is freaking out about the events of Sunday's episode, "The Mountain and the Viper," and for good reason: It was absolutely INSANE. For those of you who haven't watched — and haven't caught up with the book series — spoilers are ahead. Here's the general background that led up to last night's most WTF moment.

Tyrion Lannister has been sentenced to fight for his life in a battle to the death against the Mountain. Tyrion knows that he won't stand a chance in a battle against the giant. Oberyn Martell offers to take Tyrion's place in the battle, as the Mountain had raped his sister before killing her and her children. He's out for vengeance and is confident that he'll survive the fight due to his quick feet and expert swordsmanship.

And he might have survived the fight — had he not let his desire for revenge overcome him in the end. Oberyn knocks the Mountain down and has him right where he needs him — he can easily finish off this fight and save both himself and Tyrion from death. Yet Oberyn insists that the Mountain say his sister's name and admit to the murder of her and her children — and the Mountain stands back up, not quite as near-death as we thought. The Mountain then takes Oberyn's head, smashes it into the ground, and gouges in his eyes. The whole thing is a bloody mess that would make even guests of the Red Wedding cringe.

And naturally, Twitter has some of the best responses to the latest Game of Thrones death. (I'm guessing these guys didn't watch it through their hands like I did.) Here are some of the best fan responses from "The Mountain and the Viper."

Well, I'm glad you can all be so flip about this. I think my dreams will be haunted for years to come.