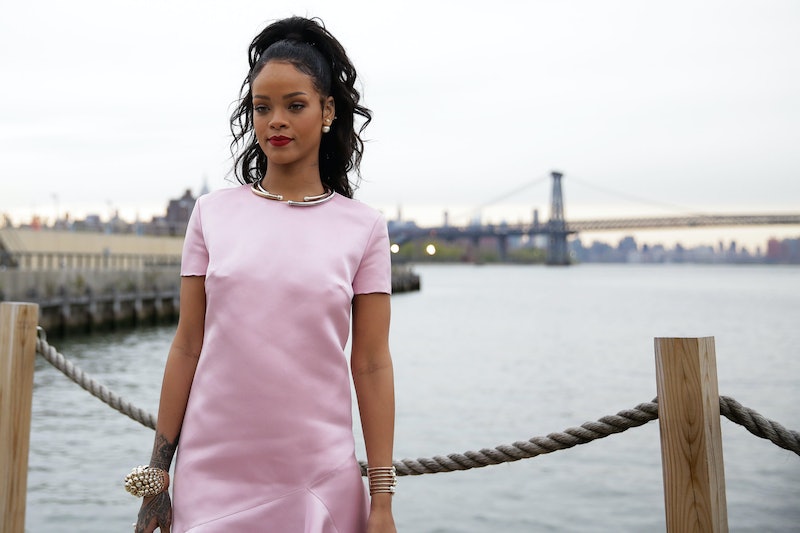 Rihanna, the March 2014 Vogue cover star and exiled Instagram user, turns heads no matter what she wears — or doesn't wear, since anyone who followed her Insta feed was treated to plenty of topless shots. When she does opt to put on actual articles of clothing, she is unquestionably one of the most copied style stars of her generation. Her fashion choices are chic and street, and her look is often cribbed by fans. Designer Tom Ford even pointed out that customers are more interested in "what picture Rihanna just Instagrammed…that's what they respond to" than what the elitist gatekeepers or magazine editors say is cool. Her most daring fashion moments eventually become iconic, which is why she is pocketing the prestigious Fashion Icon Award at Monday night's CFDA Awards. Lady Gaga and Kate Moss are previous winners, to give you some context.

While RiRi is no longer Instagramming due to the drama that ensued when she shared full-frontal, nipple-exposed photos from a European mag cover, thus violating the service's photo rules, it's not like we can scan her feed looking for more covetable styles to copy. So we're relegated to living in the past and drooling over some of her most memorable red carpet looks of recent years.Thankfully, there are lots of those to go around. These are just a few of my fave clothed RiRi moments. Congats to RiRi on her CFDA award and big ups to the singer for her support of Free the Nipple!

Rihanna showed off tight abs and that underboob tattoo in a clingy Stella McCartney gown at the 2014 Met Gala. Can we talk about those statement shoulders for a sec? They look like implants. Plus, it was just as snazzy and skin-showing from the back. That booty is something else. #Rawr.

Her see-through Givenchy Couture by Riccard Tisci, aka Kim Kardashian's wedding dress designer, worn to the 2014 iHeartRadio Awards, was reminiscent of '20s flapper chic. She modernized it with multiple necklace strands and crosses. Oh, and that blue-green lipstick? On anyone else it would look like rigor mortis had set in, but RiRi looked chic.

She donned an exotic, croc-like skin, coincidentally by Tom Ford, at the 2012 Met Gala. It looked painted on and she even had daggers for nails, giving new meaning to dangerous fashion.

RiRi was an elegant scarlet lady in custom and crimson Alaia at the 2013 Grammys. Chris Brown was her arm candy that night, but I'm trying to forget about that, since things didn't last between ChRihanna the second time around.

Hold up your left hand and you can easily block out Justin Bieber and narrow your focus on RiRi's fluffy and fluttery Jean Paul Gaultier-designed, spiral staircase-like dress. It was deceptively simple, since you can pretty much see right on through it, which is a Rihanna style staple.

Don't believe me? See it from the back. Told ya. She was the talk of the Grammy red carpet in 2011, thanks to this dress.

Her black Armani dress from the 2012 Grammys boasted a deep V and a high slit. It was sexy without even trying too hard. Ri eats sexiness with a spoon.

RiRi also poured her frame into a leaves-little-to-the-imagination JPG gown at the 2013 American Music Awards. While that bra top was an accident waiting to happen, people were more interested in the fact that she dared to wear a doobie head wrap as an accessory. While it looks like she was rocking a glossy pixie, it was actually styling tool that many women rely on to keep their perms perfect!

It wouldn't be a RiRi dress without showing lots of skin. Here, she was double trouble, showing off lots of cleavage, sideboob and thigh. Did you even notice that the dress is green?

While I'm glad the Ronald McDonald red locks were just a phase, this white pantsuit was a refreshing change of pace for her.

More like this
Rihanna Wore A Sparkling Lingerie Look For Date Night With A$AP Rocky
By Allie Fasanella
Rihanna Is A Mom Now After Giving Birth To Her First Baby With A$AP Rocky
By Ananya Panchal and Jake Viswanath
Machine Gun Kelly Wore A $30K Diamond Mani To The BBMAs
By Paris Giles
How To Master Baby Braids, According To TikTok
By Tomi Otekunrin
Get Even More From Bustle — Sign Up For The Newsletter