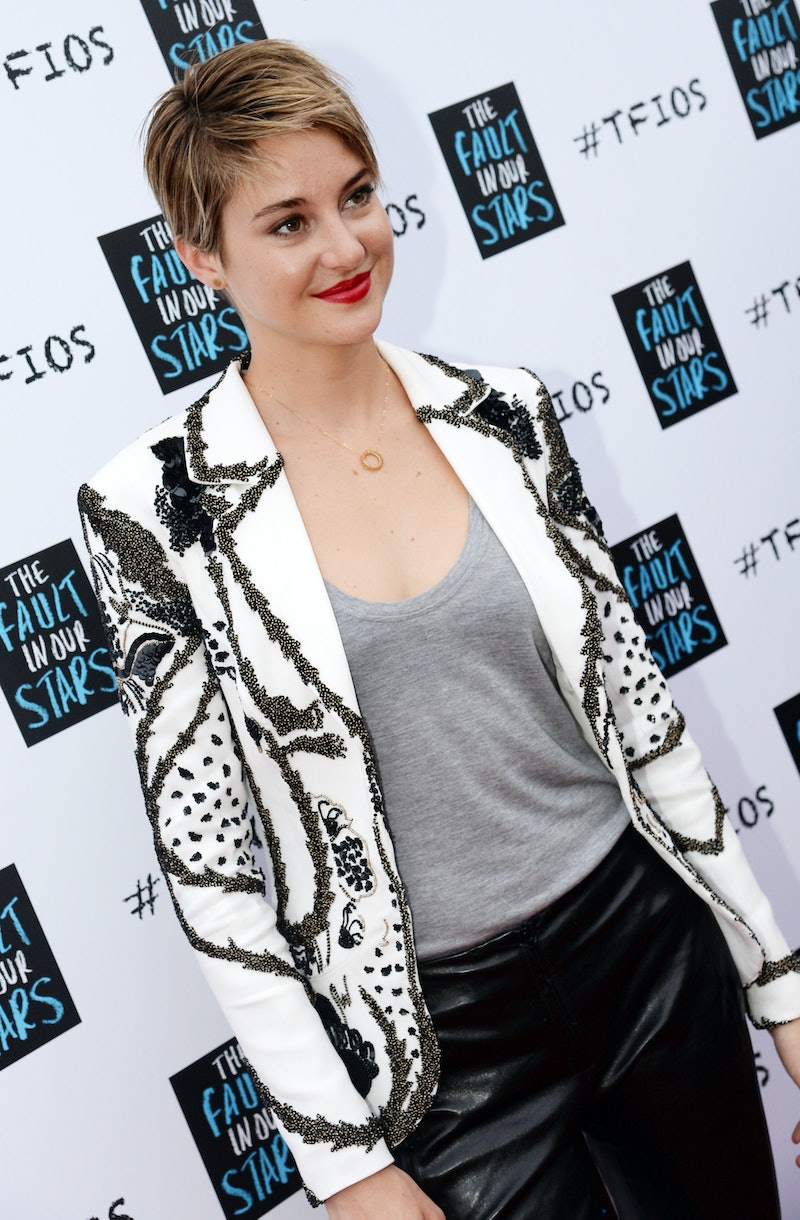 Although Shailene Woodley may say she's not a feminist, everything she does points otherwise; The Fault in Our Stars actress leads female-driven movies, promotes empowerment, and, whether she knows it or not, lives her life around feminist ideals. Those Time magazine quotes were discouraging, but in the weeks since, Woodley has proved that once someone finally informs her of what feminism actually is, she'll likely reverse her views and get on board — especially once she reviews some of her most feminist quotes, such as practically everything she says in this week's New York cover story.

In the article, Woodley, alongside Brie Larson, discusses her sudden rise in fame and unique view on the film industry. It's a fascinating piece, a thorough and insightful look at two of Hollywood's most promising actresses. The women share their thoughts on everything from growing up as child stars to competing for roles, and, notably, their thoughts on feminism. Sure, it's indirect — neither actress actually mentions the word "feminism," and the article's writer states that Woodley, at least, "does not view herself as an outspoken feminist—that would be too limiting" — but regardless, it's there. For Larson, it's not surprising; unlike Woodley, the Short Term 12 star has never publicly decried her feminism. For Woodley, though, it's further proof that while the actress may not know what the term "feminism" means, she embodies it in every sense. Seven of her most feminist quotes from the interview:

Woodley said this in regards to the bright red lipstick she wore to a press junket earlier in the day, which confused journalists who thought the hippie-ish Woodley never wore makeup. To that, she said, "well, red lipstick makes me feel sexy," and to that, we say: that's feminism!

“It’s so ridiculous the woman wakes up and she’ll have makeup on! I don’t even look like that after a photo shoot!”

Promoting healthy, realistic body portrayals in the movies? We support that 100%.

"People told us that if we wanted ­‘success,’ we’d have to dress a certain way, act a certain way. Brie and I always felt different, and, suddenly, when we met, that was okay. In fact, it was great.”

Subverting gender norms in favor of forging one's own path — if that's not feminism, what is?

“In Brie, I immediately recognized another strong female spirit."

And by "another strong female spirit" you mean "fellow feminist," right?

"The biggest issue is to pick films that are honest and not detrimental to girls."

And Woodley has done a fantastic job at doing just that, playing complex, multifaceted female characters in films like The Fault in Our Stars and Divergent.

"As women, we are constantly told that we need to compare ourselves to a girl in school, to our co-­workers, to the images in a magazine. How is the world going to advance if we’re always comparing ourselves to others?"

Woodley said this in response to a quote she gave while on The Tonight Show that was cut from the final version, in which, asked about how she's always compared to Jennifer Lawrence, she said that "comparisons always lead to despair." The audience reacted poorly, but Woodley stood her ground, telling New York that although she admires Lawrence, she believes that they're only compared to each other because they "both have short hair and a vagina."

"I see us as separate individuals," she said. "And that’s important. As women, our insecurities are based on all these comparisons. And that creates distress.”

How do we expect men to respect women or women to rise to more power when we don’t respect our queendom in the same way that men respect their kingdom?”

In non-Woodley words, we must respect womanhood as much as men respect manhood in order to achieve equality. So basically, feminism.

More like this
Twitter Is Identifying With Sally Field & Jane Fonda’s Friendship In New Viral Video
By Jake Viswanath
24 History-Making Black Women You Probably Didn't Learn About In School
By Ayana Lage and JR Thorpe
25 Inspiring Quotes From Black Women To Celebrate Black History Month
By Kyli Rodriguez-Cayro and JR Thorpe
Another Side Of Rupert Grint
By Maria Sherman
Get Even More From Bustle — Sign Up For The Newsletter
From hair trends to relationship advice, our daily newsletter has everything you need to sound like a person who’s on TikTok, even if you aren’t.