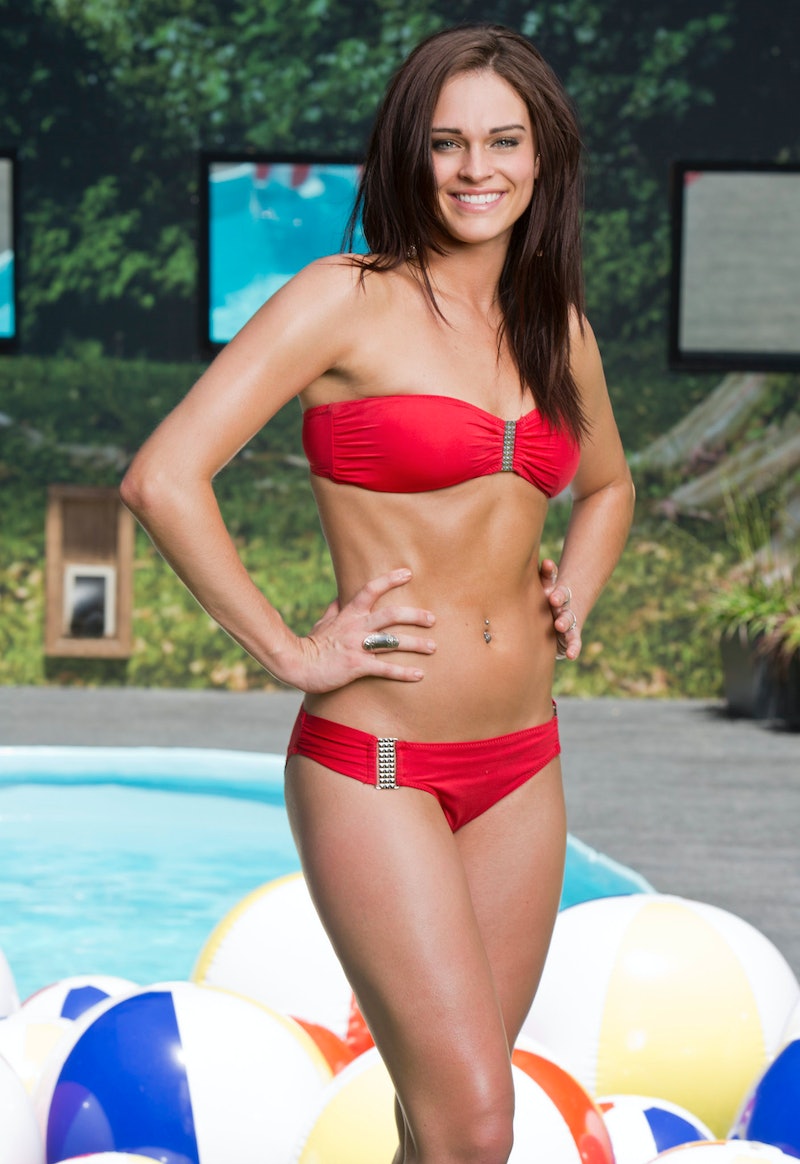 During Thursday night's eviction episode of Big Brother, ousted houseguest Kaitlin Barnaby was made well aware of her mean girl status outside of the house, thanks to host Julie Chen's exit interview that referenced her involvement in some of the season's biggest fights. But Chen failed to directly touch on Season 15's hot-topic issue: the racism running rampant throughout the Big Brother house.

Luckily, that's what TV journalists are for. Making the rounds to talk about her short stint on the series, Barnaby was forced to answer to racist statements lobbed by herself and two members of her alliance, Aaryn Gries and GinaMarie Zimmerman. And, unsurprisingly, Barnaby did everything possible to appear as the lesser of the three evils. As Barnaby said to The Hollywood Reporter :

I didn’t want to step on any toes. There were times when I stuck up for things. I think they should have known what they were saying was mean. It sucks that I’m connected [to it] but I really didn’t say anything horrible. I’m an awkward person so I awkwardly laugh through it.

But that's precisely the problem: The houseguest did say plenty of horrible things, both of the basic mean girl variety — teasing Jesse before the bedgate fight began — and of the racist variety. It would be easy to assume that Barnaby simply forgot that she racially stereotyped Candice on at least two occasions — referencing her "blackness" and taunting the houseguest with, "Let's see the black girl come out of you" — if she wasn't already asked about it by Entertainment Weekly .

I actually stand up for a lot of gay people and definitely shut down a lot of terms used in that house so I’m not sure where that is coming from. As to the whole racist thing, Candice went around the house all the time saying that she had a white side and a black side and I only meant in the terms that she was getting a little nasty in the way she was speaking to GinaMarie and Aaryn. But I am also not defending Gina Marie and Aaryn in that situation because I know that they made very inappropriate comments and I was never really a part of that.

Equating "black" with "nasty"? Still not so Minnesota nice, Kaitlin. And then there's her homophobic statement, when she said that gays were "untrustworthy in this game." Explained the houseguest to Entertainment Tonight:

I don't even really remember saying that, it must have been something in terms of game play because I stood up for him, more or less, when derogatory terms were being thrown around about gay people.

There were parts of that that I was unaware of and I was shocked that that's even in Aaryn and GinaMarie's personalities ... Candice and I are on great terms. It was definitely inappropriate on Aaryn and GinaMarie's behalf, I'm not defending them at all. There were definitely times when I told them to put that to bed, but then there are other times when you just kind of awkwardly laugh through it. I was definitely guilty by association.

It would be easier to believe if we hadn't already watched Barnaby on that fateful hammock listening to Gries tell Asian-American houseguest Helen Kim to "go make some rice." That said, we can still cheer Barnaby for one thing: bringing attention the fact that Spencer Clawson — who has made derogatory remarks about women and homosexuals that have thus been ignored by CBS — is just as bad as the rest of them. As she continued in her interview with Zap2it:

I know that the f-word towards gay people was used multiple times and I yelled at people. I also yelled at people using the r-word for mentally challenged people because it's ridiculous. I told them is this really the way you want to be on national TV? It was very inappropriate. I think Spencer — I don't know if it necessarily had anything to do with the way he was raised or if he's from the South — but I think he needed a bit of a muzzle when he talked.

Is there enough money in CBS's budget for one for all the houseguests?

More like this
Jake Daniels Just Became The UK’s First Active Football Player To Come Out As Gay Since 1990
By Sam Ramsden
Simply Sayo Doesn’t Consider Kpoetry Hard Work
By Jessica Morgan
'Heartstopper's Kit Connor Called Out Twitter For Making Assumptions About His Sexuality
By Nola Ojomu
When Was 'Bling Empire' Season 2 Filmed?
By Alyssa Lapid
Get Even More From Bustle — Sign Up For The Newsletter