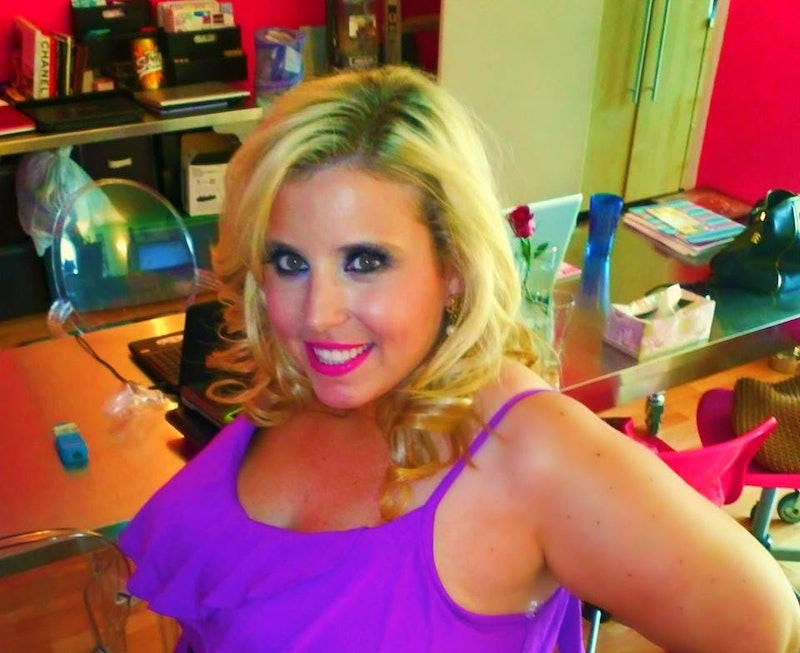 Hey, remember that woman on Millionaire Matchmaker who loved Hello Kitty and kind-of-maybe-probably gave an under the table handy to that plumber-stripper? (He said he was just a plumber, but — he was a plumber-stripper.) Does anybody here need some...pipe...laid?) If you happen to not recall, there is a real human who did that on television, who has a real job, and lives in a real city. My city...New York City. If ever I needed some beauty PR, I could go to Robyn Kassner, CEO of Haute PR, and be all, "Hey girl, I'm looking to publicize my beauty line, but not in that way where I promise to give some red-faced dude a Maserati to get him to go on a date with me." Something like that.

Now, I can't imagine that I would ever seek public image advice from someone who not only sips wine through a cocktail straw, but actively sought out an opportunity to showcase that habit to the world; but, still, I can't argue with her philosophy about deciding to go on Millionaire Matchmaker : "Some people say reality TV is garbage, but I think in the future people will study it like it’s art." PREACH. And that girl is Picasso, because she is certainly the most fascinating display Patti Sanger and her soul-crushing company have ever put out.

Perhaps the most fascinating part is that she went back for more art. After embarrassing herself on her first visit to Patti, Robin returned for a little bit of redemption. She still chose the babe, and even if he was a smarter babe, he still didn't show to their date; but she was nice to her replacement date and toned down her, uh, face a little but. But, oh, she was still Robin... the wine-and-straw were still in full effect, the Hello Kitty references still on the tip of her tongue, and she couldn't do much more than giggle maniacally when spoken to. It's difficult to connect that Robin to the woman that apparently runs "a multi-million dollar business." We know that Robin Kassner didn't find love on The Millionaire Matchmaker, so what else is there to know about her?

Listen, I get what Haute PR does: they get publicity for beauty and fashion brands. What I don't understand is who these brands are and how "New York's leading Beauty, Fashion and Lifestyle Public Relations & Beauty Branding Agency" has this website where 1/3 of the links don't work. Instead of trying to figure this business out, I'm just going to provide you with the most absurd and/or unfounded claims on their website:

She sang this song

Shortly after her first stint on Millionaire Matchmaker, Robin found the time to break into the music industry.

She has something BIG in the works

About a year ago, Robin's Millionaire Matchmaker page was full (OK, not full) of people telling her she should have her own reality show and her responses always hinted at something "BIG [being] in the works." No news yet, but I think we might be looking at the "real life" version of PubLIZity coming our way.

She's been reunited with Luke — yes, the stripper plumber!

Maybe she finally got him that Maserati.

And it’s just...really important that you watch her sizzle reel...