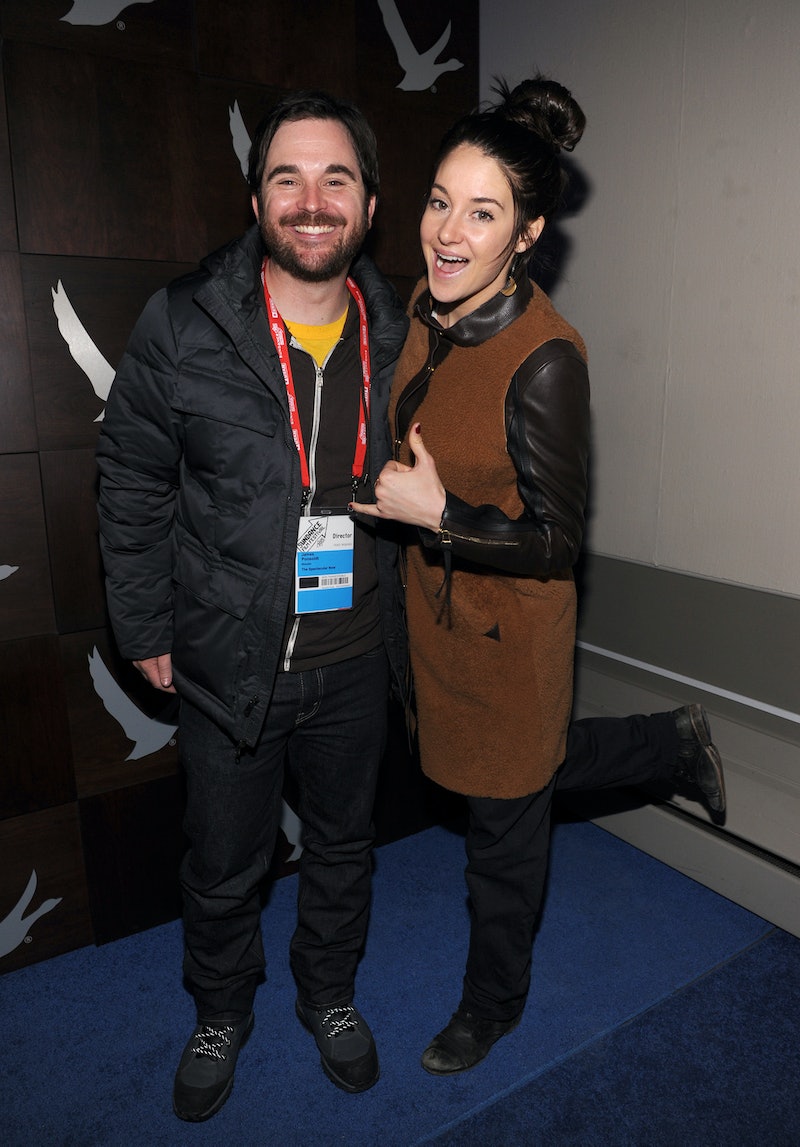 James Ponsoldt is having the best summer of his life. In May, it was announced that the director would make Rodham, the highly anticipated Hillary Clinton biopic, skyrocketing him onto Hollywood’s radar. In June, he spent the month traveling the country, premiering his second film, A24’s The Spectacular Now, to rapt audiences at prestigious film festivals. In July, the first reviews for the movie were released, and everyone from Entertainment Weekly to The New York Times (to, yes, even Bustle) showered it with praise. August has barely begun, but the Summer of James Ponsoldt can only get better; The Spectacular Now opens in theaters on Aug. 2, and it’s safe to assume that audiences will love it as much as critics. That is, unless you’re James Ponsoldt. Then you just cross your fingers and hope for the best.

“It comes down to a financial incentive,” he says. We’re in the crowded lobby of a New York hotel, and he’s had to raise his voice to be heard, but now, thinking about the future of his movie, he’s quiet. “If studios believe they can make money on a certain type of film, they’ll make them… hopefully, our movie will be successful. But, I mean, The Spectacular Now is a drama with romance and comedy. It’s an R-rated drama with teenagers.”

And that’s exactly the type of movie Hollywood hates. In a summer filled with superheroes, mutants, and alien invasions, The Spectacular Now, a realistic dramedy about teenagers, stands out from the rest. Written by Michael Weber and Scott Neustadter, the guys behind (500) Days of Summer, it’s a beautiful, bittersweet indie film, but there are no spaceships, no guns, no terrorist attacks on the White House — just two teenagers, falling in love for the first time. In other words, it’s a huge gamble for any production company to take on, let alone a studio as small and new as A24.

“I don’t know if it’s what studios think audiences want to see, but… the truth is, whether you’re an 18-year-old wondering, 'Where’s the movie for me?', or if you’re a 45-year-old wondering, 'Where’s the movie for me about life and romance?', that movie's not there for you, either,” Ponsoldt says. “It’s only tentpole movies, now. The really complicated character is more and more going to one-hour dramatic television.”

Like Ponsoldt’s debut film, 2012’s acclaimed Smashed, The Spectacular Now aims to be the exception to the rule. It stars Miles Teller and Shailene Woodley as high school seniors who are as far from cliché as possible: Teller is Sutter, a carefree, charismatic alcoholic whose addiction gets him people to party with, but no one’s respect. Woodley is Aimee, the unassuming, nerdy girl Sutter takes under his wing for maybe the wrong reasons, but while she’s smart enough to doubt his intentions, she’s too much in love to walk away. The two characters are some of the most three-dimensional teenagers seen on film in years. They're filled with the kind of vivacity and realism that colored John Hughes’ beloved ‘80s dramas, but not many since.

“I’m 34, but for me, a good movie about a 17-year-old, a 7-year-old, or a 70-year-old is gonna be compelling,” Ponsoldt says. “The age of a character is important – it changes their life circumstances and it’s part of their emotional inner life. I just think that as a storyteller, you should take teens seriously and respect them. And I think whenever audiences see a story that respects the characters, one that makes them complicated and contradictory, they’re grateful.”

He continues, “A lot of teen movies can come from a really cynical place, and that can really flatten it out — because they’re teenagers, it has to be boys making dick jokes, or they have to have superpowers, or whatever. But no, they don’t. Young people are incredibly sophisticated. They can be bright, they can be stupid, they can be anything.”

To promote the film, A24 arranged "The Spectacular Classics," a promotional event at theaters across the country that screened teen classics like The Breakfast Club and Almost Famous throughout July, with introductions by Weber and Neustadter. It was clever marketing — everyone loves nostalgia — but for Ponsoldt, it spoke to why The Spectacular Now exists in the first place.

“The movie that really affected me, and that I keep coming back to, was Say Anything,” he says. “That came out in '89, and then after that movie — there are some exceptions, of course — there weren’t that many of them. In the '90s, there were some really lame movies about teenagers, where they were just more like, she’s a frog who becomes a princess, or they’re teens, but also werewolves! Dystopia, that kind of thing… but if you look at European cinema, or Asian cinema, there are stories about young people all the time. It’s only a phenomenon of the American studio system of the past 20 years.”

With The Spectacular Now, though, Ponsoldt, Weber, and Neustadter have broken the mold, creating adolescent characters who feel human, and look it, too. Teller is attractive, but Sutter’s appeal comes from his charm, not his looks, and as Aimee, Woodley rarely wears makeup, providing her with an affecting kind of visual vulnerability.

“Shailene is one of those people that when you put her in front of a camera, she makes everything more honest,” Ponsoldt says. “It’s just a level of naturalism, and honesty, and a lack of vanity. She’s an actor where, if you as a director say, I don’t really want these characters to wear makeup, she’s like, okay, yeah, of course, I couldn’t agree more. Not every actor would say that.”

Woodley is stunning in the film; her performance is understated and lovely, and is telling of her enormous ability as an actor. Her Aimee is frustratingly complex, her constant waffling between the wallflower she is and the girl-next-door she wants to be real and relatable. Self-aware and insecure, Aimee is a character type not often seen in Hollywood – the three-dimensional, complicated female.

“Sometimes storytellers flatten out female roles,” Ponsoldt says. “They’ll allow a man to have a wide range of emotions — he’s an asshole, but he has a heart of gold, and he can be all these things in between! — but a lot of the time, women get pigeonholed.”

Aimee, though, as well as Brie Larson’s Cassidy, and Mary Elizabeth Winstead’s Holly, is wonderfully multifaceted. Ponsoldt succeeds in doing something good filmmakers strive to do, and bad ones often don’t even attempt — he makes all his characters, male or female, feel honest.

“If someone wants to create a movie about the noble, or the bad — as soon as you make a decision that this person is one way or another, you’re kind of making a propaganda film,” Ponsoldt says. “You’re flattening characters out at the expense of the complexity of their humanity.”

He continues, “I have no idea what you do when you wake up in the morning and go to the bathroom, and you don’t know what I do, but the weird stuff we do when we’re alone is what makes us most human. When we’re being gross or boorish, or tired or short-tempered, or hungover, or whatever ... the way I connect to the humanity in characters is by remembering that we’re all basically the same. We’re basically dealing with the same crap.”

And in The Spectacular Now, that crap is exactly what makes the film work so well. The themes — love, alcoholism, family issues — are familiar, of course, but they’re handled with a sincerity that makes them feel refreshingly new. Scenes that could have been clichéd or predictable – Sutter meeting his deadbeat father, the couple having sex for the first time – are lifted by their honesty. There is plenty of awkwardness and discomfort to spare, but it just makes The Spectacular Now all the more powerful. It’s a punch-you-in-the-heart kind of film. And in today’s Hollywood, that’s rare.

“The film has an innocence to it, but it also has a bitterness,” says Ponsoldt. “Life can be painful, but it doesn’t mean it has to be devoid of hope and love.”

The Spectacular Now, directed by James Ponsoldt, stars Shailene Woodley and Miles Teller. It will be released by A24 Films on Aug. 2.

More like this
The 'Spiderhead' Movie Ending Is Nothing Like The Short Story It’s Based On
By Morgan Leigh Davies
Everything To Know About 'My Big Fat Greek Wedding 3'
By Grace Wehniainen
Alicia Silverstone Has Recreated An Iconic 'Clueless' Scene
By Frances Stewart
Emma Thompson, Lashana Lynch, & Stephen Graham Lead Netflix’s 'Matilda'
By Sophie McEvoy
Get Even More From Bustle — Sign Up For The Newsletter