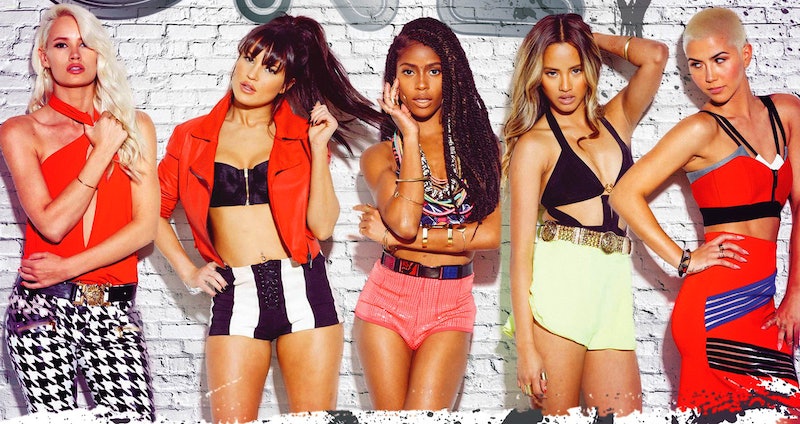 On Tuesday, new five-member band G.R.L. finally released their official debut single, “Ugly Heart” — and it’s absolutely glorious. “Ugly Heart” actually first made its way online back in March, but few people got to hear it because it was taken down so quickly. Having already released two of their own songs, “Vacation” and “Show Me What You Got”, in addition to their mildly successful Pitbull collaboration, “Wild Wild Love,” the general public should be somewhat familiar with G.R.L. by now — or at least that’s what the band is hoping for! Will “Ugly Heart” be a big hit for G.R.L.? I sure hope so.

Produced by Dr. Luke & Cirkut (Miley Cyrus’ “Wrecking Ball”) and co-written by Ester Dean (Nicki Minaj’s new single “Pills N Potions”), “Ugly Heart” is a guitar-driven pop stomper with a few modern electronic flourishes. On the track, the ladies sing about moving on from a man who's sooo ridiculously pretty, sooo ridiculously good-looking, but unfortunately, he’s got an “ugly heart.” Beauty is only skin deep, people!

Your face is a work of art

Your smile could light up New York City after dark

Stamped with a beauty mark

But it’s such a pity, a boy so pretty…

With an ugly heart

The chorus has a chant-like quality to it that makes it super-easy to sing-along with — which, of course, is the whole point! Every person who I’ve played “Ugly Heart” for so far has said to me, “Wow, who is this? It’s so catchy!” Ah, it is, isn’t it? (And I guess I just outed myself as G.R.L.’s number-one fan/promoter. Oops.)

My favorite part of “Ugly Heart” is definitely the bridge, where G.R.L. member Paula Van Oppen (who doesn’t always get a chance to shine) sings over a simple backdrop of strumming guitars. She just sounds so freakin’ adorable. As Van Oppen reaches the end of her solo, fellow member Simone Battle (who, admittedly, has a much stronger voice) takes over, belting out a high note with all of her might (and then some) just before the song launches back into its rousing, foot stompin' chorus. That, folks, is what pop music is all about.

It was a smart move for G.R.L. to ditch the now passé dance-pop sound of past songs like “Vacation.” Instead, “Ugly Heart” puts a bouncy, polished façade over the radio-friendly indie pop sound that’s so popular right now (think The Lumineers — only with approximately 162 percent more lady power). With the right promotion, I think “Ugly Heart” could become huge.

At this point, it feels like G.R.L.’s debut album has been in the works for decades. Considering it took record label RCA over two months to release “Ugly Heart” after it leaked online, it doesn’t seem like anybody's in too much of a hurry to put out new G.R.L. music. Let’s just hope that “Ugly Heart” does well enough for the group to actually have a chance to release their album!

Are you as smitten with this song as I am? Were you aware that you can now buy "Ugly Heart" on iTunes? Cool, just checking.

More like this
This James Bond Event At Abbey Road Studios Was A 007 Fan's Dream
By Samantha Rollins
The 'Love, Lizzo' Harry Styles Scene Is Just 1 Moment That Made Fans Feel Seen
By Brad Witter
Nick Carter Responds To Allegation Of Raping A 17-Year-Old On A Tour Bus In 2001
By Jake Viswanath
Lady Gaga Tries The Wednesday TikTok Dance Trend Set To Her Song “Bloody Mary”
By Jake Viswanath
Get Even More From Bustle — Sign Up For The Newsletter