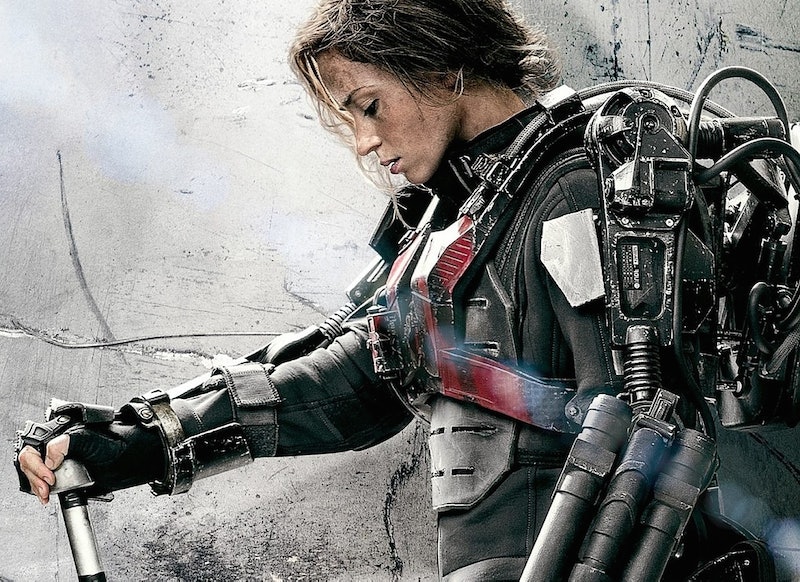 When this weekend rolls around and you're trying to figure out just what in the heck movie you want to see, Edge of Tomorrow might be one of those films. And it should be, not just because of its speedy pacing, insanely fueled action, tightly wound script, or even the allure that is (to some) movie star extraordinaire, Tom Cruise. It's because Emily Blunt totally steals the show. She's a hyperdriven mega-badass of the highest order and totally the best part of the whole sci-fi shebang.

As a force to be reckoned with — and the so-called Angel of Verdun, having brought down the aliens in a stunning battle defeat prior to the big brawl at the center of the film — Rita Vrataski (Blunt) is naturally pigeonholed as a "bitch" (because of course! Because strong womens be ter-ri-fy-ing!). At the root of it, the reasons are pretty obvious: she managed to be ruthless and exacting in her takedown (read: murder) of a bunch of aliens. This is very much counter to the age-old ideals about ladies being the constant, delicate flowers of emotional heartstring-pulling. Vrataski is a big ol' "fuck you" to all of that, thanks to her unwavering commitment to the cause.

Vrataski is a force — not only on the field but off, as well. With alien dummies whizzing around her in a practice room, she remains calm, cool, collected. She is undeterred by the seemingly gargantuan task set ahead of her and Major William Cage (Cruise) to, y'know, save the world. She is relentless in her determination to beat these damn things and take the world back for humanity.

Lesser folks would've just accepted that death was imminent, died and been okay with it because what could they have possibly done, you know? I mean, the myriad parts and hypotheticals and scenarios on which defeat hinges are nothing short of an overwhelming prospect. To say nothing of the ramifications of taking down an entire alien race, between two people. Talk about a mission impossible.

But Vrataski is no wilting flower: she knows it can be done, because intelligence and the expansion of that leads to far better outcomes than simple repetition. This is what humanity has on its alien, hive-mind counterparts.

Her work as the action flick's arguable hero (sorry, Tom) isn't compromised by her being a woman. In fact it's strengthened by it — she's the only one who believes Cage when he explains what is essentially the worst Groundhog Day scenario, ever. She trains him, aids him, and protects him (and in turn the fate of humanity) time and time again. Making the tough calls and committing to what is, essentially, a permanently suicidal mission.

Now, if that means she's a bitch then shit: I wish I was a bitch, too. Because Vrataski is clearly one who abides by the wise words of a one Miss Tina Fey:

And that makes her the best sci-fi hero we've encountered in a long, long time.