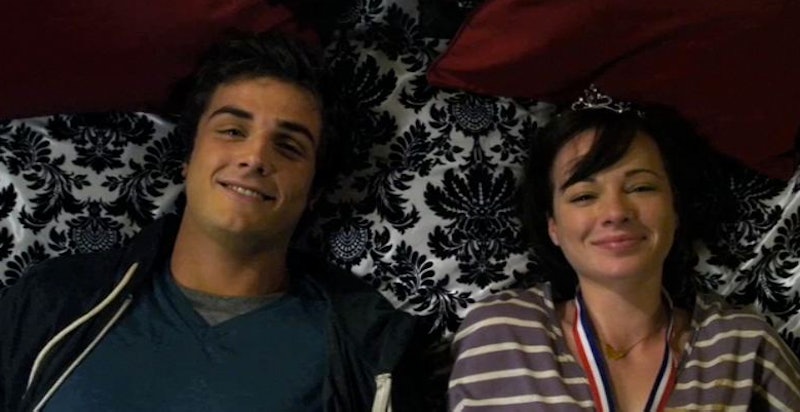 This season of Awkward has been a somewhat brave step for an MTV show: They've taken most of the awkward out of their main character. Jenna is still far from perfect, sure, but her neuroses and irrational word vomit has been dialed back from a nine to, like, a 4.5 tops. This isn't just because she's dating an ~*evolved*~ college dude, either: She's able to date the college dude because she's evolved, not the other way around. Which is why it's believable at the end of "Prison Breaks" when Jenna declares that she's putting Matty McKibben behind her. Except that it isn't.

Here's how it is believable: Jenna's grown since she was with Matty. That point's pretty much undeniable; unless some truly crappy writing takes place her entire character arc's not gonna unravel at the first sight of Matty's lips. Jenna is for all intents and purposes ready and reeling for college, so it makes sense considering Jenna's trademark impatience that she'd try to play-act that right this second by starting to cut out key pieces of her high school life. Also on the believable side: Luke continues to be downright great. That doesn't so much mean Jenna should cut Matty out so much as it means there isn't a void she's trying to fill with him anymore — a part of their relationship that's always been more a Jenna vice than a Matty vice, since Matty actually seems to "use" Jenna far less than Jenna uses Matty.

Here's how it's unbelievable that Jenna's "done" with Matty for good: Her statement in tonight's episode seems to put a moratorium on the idea of even a friendship with Matty, which just seems silly. These two weren't necessarily the best for each other in seasons one and two — he was insecure, she was insecure, they both expected different things from each other but had truly disastrous communication techniques that led to mutual destruction — but they have evolved since then, and it seems kind of silly of her to decide to shut him out just because her crush was momentarily back last week. It shows that though Jenna sees that she's evolved, she still doesn't quite trust herself enough to allow temptation nearby — and that lack of trust's the thing that's gonna cause an unraveling, not the simple presence of Matty McKibben.

Basically: Jenna's not as grown-up as she thinks she is, and that's all likely to come bubbling up come season finale time.

In the meantime, the biggest way Jenna's de-Mattyfying her life showed itself this week was by her refusal to help bail him and Jake out of prison after they got busted for drinking in public and thrown in the 18+ holding cell. The thing is, that came off less as Jenna moving on romantically and more as a symptom of Jenna's history of being a crappy friend. Jake was there, too, after all, and even more than that we're dealing with the glaring fact that Matty stuck around as Jenna's friend even after she publicly cheated on him and started parading around in her terrible relationship with Collin last year.

Matty, in fact, was the most loyal friend Jenna had that season — nearly everyone else abandoned her when she started acting downright horrid to everybody around her — so even though I love the girl it's kind of awful that she'd pawn off his jail bail to someone else while he's obviously going through a rough emotional time.

Those gifs up there show the severely overused trope of the knight in shining armor bubbling up in yet another teen show, but if you let it exist on its own it's actually pretty telling given the context of these characters. Matty, for his part, evolved from the tail end of season two onwards into a character who's often a genuinely good friend: He takes care of both Jenna and Matty (his two favorite people) at their most vulnerable moments, often without complaint. He might have been sketchy at the beginning of season two when he was trying to push Jenna and Jake apart — but by the end he'd learned his lesson and, when Jenna and Jake broke themselves apart, his first concerns were for both of their genuine happiness, instead of his own. Matty gets a bad rap sometimes for his early actions, but he's actually grown into a truly great, supportive friend.

And to her credit, Jenna didn't completely abandon Matty this episode, despite how Eva tried to pass it off: Jenna knew Matty's brother could help. But it shined a light on a larger issue: Jenna, for her part, seems to like to be caught more than she likes to do the catching. In other words, she's much better at being the one in emotional crisis than she is at taking care of the people around her when they're going through theirs. In tropey narrative terms Matty could have used a hero this episode, but there was no one there to catch him — Jenna was elsewhere contemplating the benefits of unnecessarily stepping away from him.

Writing this recap I'm realizing I'm angrier at Jenna than I thought I was when I first watched this episode. But friendship matters, especially when you're going through tough shit, and the people you want in your life are the ones who are gonna ask questions like these when the world's thrown you for a loop:

Jenna's grown a lot this season, but she's not one of those people yet. Turns out she's got a lot more growing left to do. Her journey from the pilot to now's largely been about her coming into her own; maybe her journey from here on out should be her coming into being someone the people she cares about can really count on to be their hero.