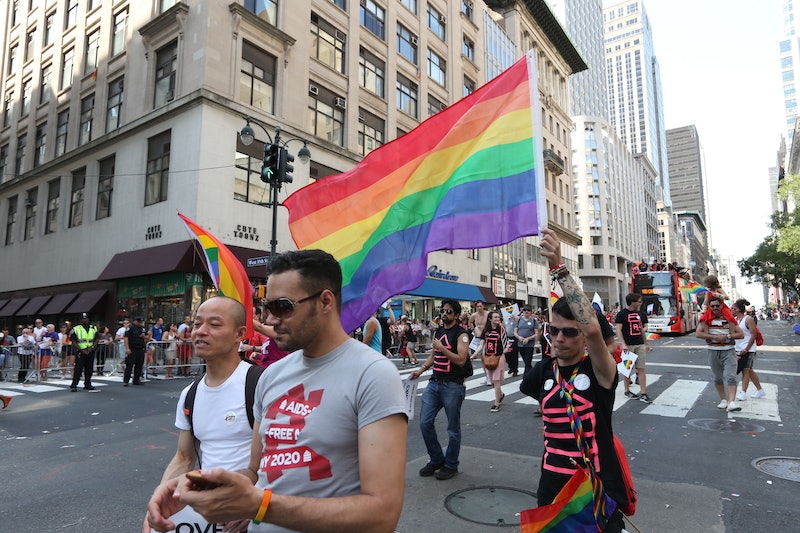 Happy LGBT Pride Month! Time to talk coming out. The Human Rights Campaign defines coming out as "the process in which a person first acknowledges, accepts and appreciates his or her sexual orientation or gender identity and begins to share that with others." For most LGBT people, it's a complicated, multi-stage process — often because before you can come out to others, you need to first come out to yourself.Much as some of us would like to just get it over with — Giant party! Confetti! Streamers! Personal Pride Parade! — most of us experience something more akin to coming out to our mother via Skype from 18,000 miles away, while sobbing over a Missy Higgins album. (But that's another story.) Either way, coming out is rarely a single process or event, and involves years of thinking about who to be 'out' to, how, and why.

College is one of the most popular times to begin the coming-out process, for many reasons. Introduction to new people and communities, including explicitly LGBT ones, can clarify feelings that have been brewing since adolescence — or suddenly reveal them, like a sexy magic trick. Ta-dah!

College is often seen as a safer, more accepting place to come out, away from family stigma and childhood identity, which can be very important to LGBT young people. You're starting over, you're a new person with your shiny new notebook — and you're about to embark on one of your biggest experiences ever. Here are (in my humble experience) the 11 stages of coming out in college that you can expect.

Maybe it's an RA, a friend, or that girl or boy in your class with the nose ring and the excellent hair, but suddenly, you've got that fluttery feeling in your stomach and are plotting ways to engineer 'accidental' run-ins in corridors. It might have emerged without you realizing it — or it might have been there for years — but it's definitely there, and you can't ignore it. Oh dear.

This is the phase where you realize the implications of your feelings, and go into panicky-introspection mode. What's going on, where did it come from, is it going to go away, and does everybody know? (No. They don't. But you might wander around convinced that everybody possesses military-strength gaydar, and that you are a nuclear sub of Homosexual Feelings anyway.)

There can of course be very sincere fears involved in the process of accepting your own sexual orientation: Case Western University's LGBT Centre rounds them up as terror of 'rejection, gossip, loss of spiritual foundation or family, harassment, discrimination, being seen as immoral' and a host of other wonderful things. But you also know the consequences of keeping this inside. So this is likely to be a terrifying as well as enlightening time.

In the third stage of the coming out process, you're likely going to seek out some other LGBT people, or some gay literature, or watch some films. If you've never been exposed to LGBT-centric communities or art before, this can be a time of revelation. (It can also be a bit heartbreaking to discover that LGBT people can be just as bitchy, angry, confused, and rude as straight people. Rainbows don't guarantee niceness.)

As confidence builds, small inroads into actual same-sex-loving behavior may become a little less scary. This is the time when you start pushing yourself to do new things. And maybe make out with some truly inadvisable people. Lip rings? Really?!

It's extremely common for experimentation to be followed by guilt, worry, sadness, or confusion. Some people, on the other hand, wake up and immediately go 'Well, that was satisfying and felt absolutely right, and I am completely at peace with this experience.' I am very envious of those people.

Most people, when it comes to coming out, start small with friends who are important to them, or that they think will take it the best. Amazingly, HRC statistics say that 90 percent of LGBT young people are out to their groups of close friends. That's where it starts; one conversation at a time.

Now's the time when reactions, (if there are any) start to come in — and you have to cope with them. They can range from a relieving (if slightly anti-climactic) "Cool, wanna play some Halo?" to disgust, confusion, religious anxiety for your soul, or just very stupid questions. No, you do not automatically like The L Word or hate shaving now. No, you do not know 'which one is the man,' because that is dumb. There will also possibly be people who rejoice because they "knew" you were queer before you did. They can be annoyingly smug.

You are an out person in your college community! Maybe you start wearing rainbow pride bracelets and actively participate in every Pride Parade. Maybe you start seeing a person of the same sex — publicly. (Godspeed with that one; use protection.) Maybe you just keep it to yourself and your friends. Either way, this is a big new phase. Have some cake.

According to Israeli research conducted in 2011, family support is the most crucial factor when it comes to coming out. (LGBT people say: duh.) While the choice to come out to families first is popular, the realities of living away at college, the desire to do it 'in person,' and fear of a bad reaction can mean that coming out to your family in college can get put off or saved till you're 'sure.'

This can be the most terrifying bit of the coming out process, and can involve tears and very intense feelings — but it can also be the most surprising. Your conservative Aunt Nancy who bakes cupcakes for Republican fundraisers may be your most ardent supporter to love whoever you like. Word to the wise: do not do it over Christmas dinner.

You're out of the closet and hopefully comfortable with your identity. But coming out never really stops. New people and new situations always throw up the nagging thought: should I tell them? It's annoying, but at least you've now got people who have your back, and maybe some less inadvisable make-out partners — so you've made the first really big steps. You did it!