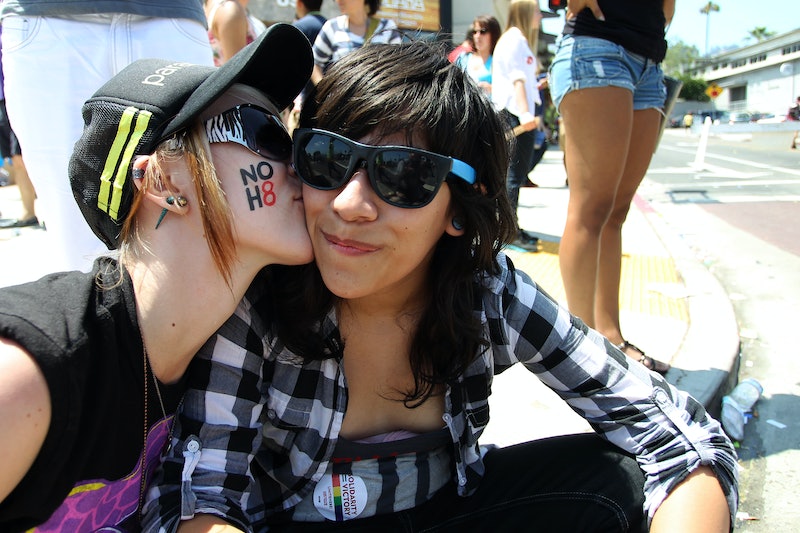 As long as there have been openly gay people, there have been ignorant questions asked by straight people to those same openly gay people. We queer ladies are a particular target for some of the most spectacularly dumb questions. See, when straight people ask us ignorant questions, we tend to get the double whammy of homophobia and sexism, all in one. Whether from ignorance, rudeness, disbelief, envy, or well-meaning curiosity, we're pretty sure that almost every woman-loving woman, from Sappho to Ellen, has had to deal with at least one of these questions at some point. (Unfortunately, probably several of them.)

This list extends to all queer ladies, from the avowedly bisexual, to the queer, to the gold-star lesbian. (Some LGBT vocabulary for you: A gold-star lesbian is a lady who has never had sexual contact with a man.) And yes, all of these questions have really been asked, by real people, to me or other queer women I know.

So, if you're itching to start a conversation with your local queer lady this Pride Month, please feel free. But read this first and avoid these dumb questions, won't you? Trust me, we're sick of answering them.

but How can you be gay? you don't look gay at all

How dreadful! The postal service must have lost the parcel of Birkenstocks they sent when I applied for my official Lady Who Likes Ladies Card. I shall be filing a complaint forthwith. (On the plus side, I hear the card has a picture of a cat on it!)

you want to come to the Tegan & Sara concert, right?

No. I also don't want to go to an Ani DiFranco or Melissa Etheridge gig, or see an Amber Heard film. The Rum Diaries was terrible.

Definitely. We're all connected to each other by a series of cranial links in a vast worldwide rainbow network of gayness.

The women having sex with women in adult films don't really resemble the way we have sex. For one thing, they all seem to have five-inch nails. Ouch.

But is it actually sex if there's no penis?

This is so ignorant, I can only point you to this.

So sex for you is just mostly like straight foreplay, right?

Thank you for your interest. Please go find somebody else to explain this to you.

Why don't you go out with Gretchen? She's gay too!

We may need something more in common than both expressing a fondness for breasts.

What is your problem with men? Did one treat you badly?

If you've never had sex with a guy, how do you genuinely know you won't like it?

If one's predominant reaction to seeing a set of genitals is disgust, it's likely things won't really end in orgasms for all.

Bisexuality doesn't really exist, right? You're just doing it for your boyfriend.

Yes, I have gone through years of conflict, personal identity crisis, meaningful relationships with both sexes, and soul-searching for the sake of pleasing a dude.

The answer to this question is so very rarely 'yes.' I think you're wonderful, but just because you're a woman, that doesn't mean I like you that way. No offense.

Did you ever think you're actually a man inside?

I didn't, no. I did once think I was actually a stegosaurus inside, but that was when I was five. For the last time, being trans and being gay is not the same thing. You can be both, but it's just as likely a straight person would identify as trans.

Are you sure this isn't a phase?

Ten years on, I am reasonably sure, yes. However, if I wake up one morning miraculously cured of this wonderful condition, I will let you know.

If you have a baby, do you hope it will be gay too?

Why can you walk in heels?

I joined the Gays Undercover League. They train you to do 'normal-people' things like apply lipstick and have conversations about Angelina Jolie without salivating.

Are you just lying so that I stop hitting on you?

I mean, I would very much like that to stop happening, but no. No I'm not.

Would you want to use my sperm if you have a baby?

Can I catch gay?

Really, someone has asked me this.

so, are you going to cut your hair and dress like a boy now?

so, who's the boy in your relationship?

Happy Pride Month, and remember, when it comes to ignorant questions: