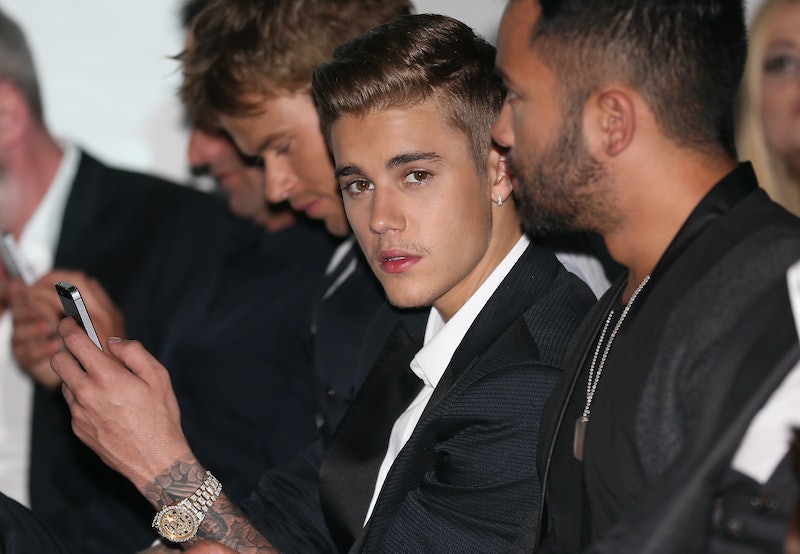 Just days ago, Justin Bieber apologized after a leaked video showed the pop star making a racist joke. But now, The Sun claims to have a new video of Justin Bieber once again using the n-word while joking about killing someone and name-dropping the Ku Klux Klan. This news should be absolutely shocking but, really, was there any possibility that his racist joking was a one time occurrence? The surprising thing is just how extreme the second, currently unreleased video sounds. It's not just the repeating of a racist joke that was heard in the first tape.

According to the NY Daily News, in the video Bieber changes the words of his song "One Less Lonely Girl" to "One Less Lonely N****r." He is also said to sing something about killing a "n****r" and joining the KKK. He reportedly giggles throughout all of it. The Sun says that it is unclear when exactly the video was filmed, but that it was after he was signed to the Raymond Braun Media Group "and was a rising child star."

While the first video did feature an offensive, tasteless joke, the stuff from the new video sounds much different. It's one thing to repeat a racist joke you heard, it's another to joke about murder and change the lyrics to your own song simply so you can say the n-word.

When Bieber apologized for the first video he said in part of a longer statement,

As a kid, I didn’t understand the power of certain words and how they can hurt. I thought it was ok to repeat hurtful words and jokes, but didn’t realize at the time that it wasn’t funny and that in fact my actions were continuing the ignorance. Thanks to friends and family I learned from my mistakes and grew up and apologized for those wrongs.

It sounds like this video is from around the same time as the first one, so does that mean this apology is meant to cover everything? Or is he going to speak out again? For most people a leaked racist video would ruin a career, cause a drop in record sales, a loss of fans. For Bieber it brings out support from his followers and a total lack of being held accountable. This is why, even though he might not be telling racist jokes anymore (if you can even call those jokes), he still does things like totally disrespect authority during a deposition and vandalize his neighbor's home. His lack of concern not only about joking this way, but about not caring that he was being filmed at the time really shows how long he has lived with this conceited mindset.

Bieber might never even mention the second video (Or the third or the fourth. There could be more.) and just assume the Beliebers will let it slide. Weirdly, they almost definitely will and that's the strangest part of all.