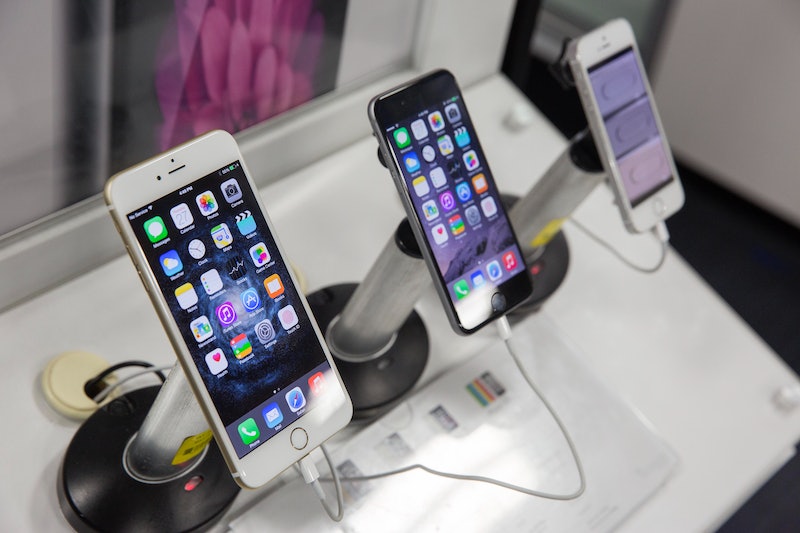 Bless you, Apple, for finally bestowing upon us the power to leave group texts thanks to the recent Apple iOS 8 update! Of course, it’s possible that maybe we should be cursing you for making this whole thing a problem in the first place, but no matter. At least you’re finally rectifying the issue. Either way, yes, it’s true: It was announced on Monday that the latest iPhone operating system update will include a number of much-needed new options for text messages. As this image tweeted out by Yahoo! Tech shows us, you’ll be able to name a thread, add and remove… something (I’m not really sure what — people? Other phone numbers?), set yourself to Do Not Disturb, and — most importantly — leave a conversation.

There are a whole lot of other shiny new bells and whistles iOS 8 will have, as well, but let’s be honest — the ability to leave a group text is by far the most exciting one. No more missing calls because you had to silence your phone due to incessant buzzing or binging! No more hours spent sorting through hundreds of texts to find the only one you actually needed to see! Rejoice, for all shall be well in the Land of iPhone! Is anyone else as pleased as we are that they won’t have to deal with these 10 types of group texts anymore?

Some parents take to texting like the proverbial fish to water; others… don’t. And the ones that don’t have a tendency to send long, rambling life updates full of exclamation points to everyone they know. You subsequently spend the next two days growing more and more irate every time you receive a new response from a relative you haven’t seen in person since you were in diapers.

It’s awesome that your friends from high school are all going to get their drink on this Friday at that karaoke bar you thought closed years ago, and you appreciate the invite — but you live on the other side of the country. And you really, really wish your phone would stop dinging at you with more details for a shindig you definitely can’t attend.

3. The Attack of the Three-Year-Old iPhone Enthusiast

You know how it goes: Your cousin’s toddler, who she’s positive is going to be the next Steve Jobs, keeps managing to get her hands on Mama’s iPhone — and every time she does, you end up with a group text full of gibberish. But that’s not the worst part — the worst part is that everyone else in the message can’t shut up about how adorable it is that Little Suzy already knows how to send texts! Isn’t she cuuuuuuuuuuuuute? Ugh. No.

4. When a Stranger Texts

Who is this random person you’re getting texts from? Are they a friend of one of your friends? They must be, because otherwise they wouldn’t have access to your number — but you don’t know them, and you’d really rather not be privy to exactly what went down at the bar last weekend. Yikes.

We’ve all been there: You, Jack, and Jane are like the Three Musketeers, and you have a long tradition of sending hilarious group texts between the three of you. But you’ve had the sneaking suspicion lately that Jack and Jane might be getting into a little somethin’ somethin’ without you, and when those group texts turn into "Jack and Jane texts," it’s time to leave.

You hate emojis. Your friends all know you hate emojis. So why the hell is everyone in this conversation communicating solely in emojis? Use your words, dammit!

This one is similar to the New Pet Owner conversation — only it’s a million times worse, because this time it involves a new baby. Babies are awesome and you’re thrilled for you pal, but seriously. There’s only so much “OMG, she is precious!!!” a single person can take — especially when it’s not your kid.

Maybe the texter sent the message out to the wrong group; maybe your phone number just happens to be located next to the intended recipient; but whatever the reason, you know that you were definitely not supposed to be included in this particular chain of communication. Now you’re either dealing with a conversation that has nothing to do with you, or with a whole bunch of people texting everyone else, “Um… sorry, but I think you sent this to the wrong person.” It’s a lose-lose situation.