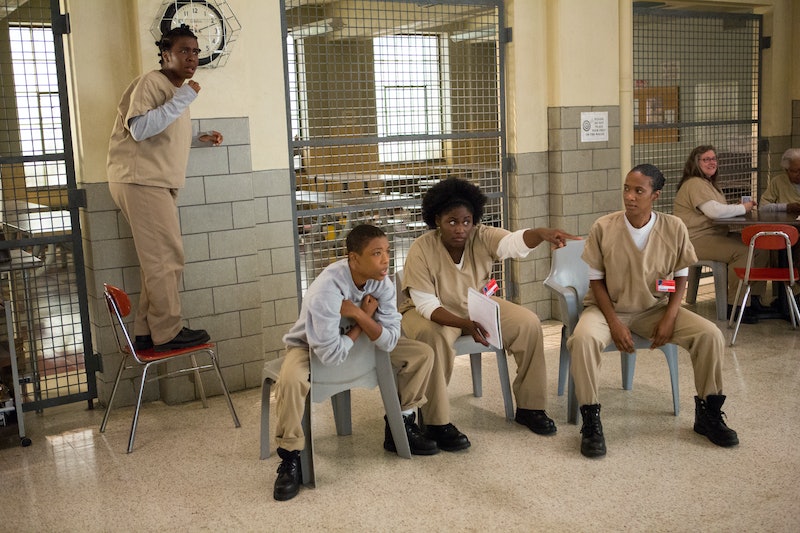 So! Orange is the New Black ... is back! And man oh man, that first episode was a departure (literally and figuratively), wasn't it? Things are changing for our inmates in big, big ways. And so we've decided to break it all down for you.

Not Just About Litchfield Anymore

When we're first thrust back into the world of Piper Chapman & Co., the "& Co." part of that statement is noticably absent. In fact, the first half of the episode was sort of confusing in that way — neither we nor Piper knew where she was off to and what sort of trouble was waiting for her at her destination.

Yes, Alex Vause is In the Premiere

Fans of OITNB were f-r-e-a-k-i-n-g o-u-t over the news that Laura Prepon would appear in only a handful of episodes. But happily, there is a decent amount of her in the premiere. Does that result in something good or bad for Piper? Well, that's certainly debatable...We Meet Piper the Child

Aww wee baby Chapman — how cute! Getting to know Piper's upbringing (which, as a Connecticut native ourselves, we can confirm was SCARILY ON-POINT with how pretty much everyone in Connecticut is, woof) sheds a lot of light on the how and why she gets herself into the trouble she has. Plus neurotic baby Chapman is adorable in her far-too-uptight-for-her-age ways (another thing to which many of us Nutmeggers can relate).

The Premiere Will Take You Up in The Air (Literally!)

Up, up, and away...in an airplane full of criminals! That's not what we were expecting at all.

Piper Gets a New Nickname

So Many New Faces

There are new inmates, and with that, a slew of new problems. Things are about to get terrifyingly real for Piper, methinks.

How is it that a show about a women's correctional facility has a more evenly distributed full-frontal ratio than a series like, say, Game of Thrones? How is that possible, eh? (This is our official request for more dongs on Game of Thrones. Also sorry about using the word 'dongs' it's just too funny.)

Cockroaches are the New Chickens

Remember The Chicken incident? Well, if orange is the new black then clearly cockroaches are the new chickens. (R.I.P. Yoda the Cockroach we hardly knew ye.)

You Might Hate Piper By the End of the Episode

But not in a real, ugh I hate you so much right now sort of way. More in the WHY can you not just think for yourself and do what's best for you and stop listening to everyone else because clearly lying gets you in heaps of trouble way. Why does she do the opposite of what's best for her always?!

More like this
These Memes & Tweets About Alicent in 'House Of The Dragon' Prove She's The Queen Of Messiness
By Grace Wehniainen
'The Rings Of Power' Episode 7 Will Feature An “Unlikely Pairing Of Characters”
By Grace Wehniainen
Nicola Coughlan Shared A Lady Whistledown Excerpt From ‘Bridgerton’ Season 3
By Grace Wehniainen, Alyssa Lapid and Sam Ramsden
A New 'And Just Like That' Table Read Pic Confirms A Key Character's Return
By Jack Irvin and Grace Wehniainen
Get Even More From Bustle — Sign Up For The Newsletter