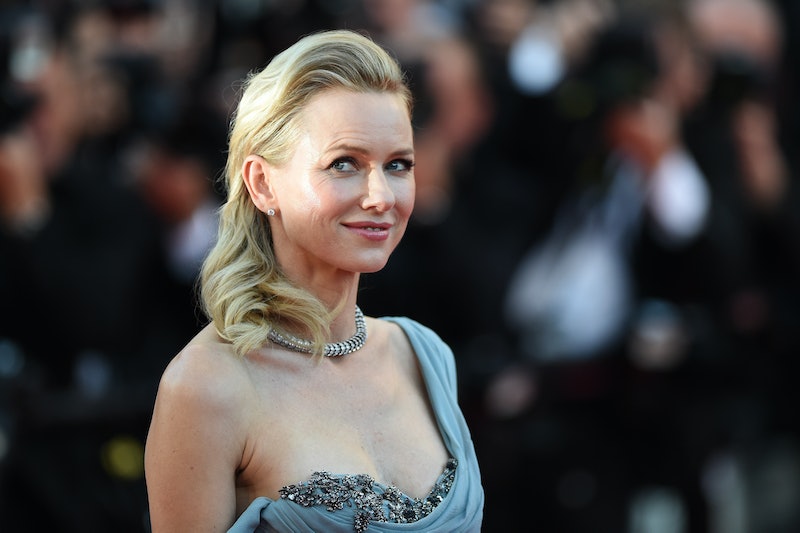 Hollywood and whitewashing go together like Disney stars and scandals, so why should the Divergent film series be any different? Considering Hollywood tends to define the phrase "oliver skinned" by its palest definition possible — if they bother to give any note to the description at all — then it comes as no surprise that Naomi Watts has joined Divergent as Evelyn. Evelyn is the leader of the Factionless and — SPOILER ALERT — Four's mother, who plays a huge role in the last two books of the trilogy (and three films of the franchise). Evelyn is also supposed to be a person of color.

According to a question and answer session that Veronica Roth did for her fans, Evelyn is described in the book series as follows:

Here is how Evelyn, Tobias’s mother, is described: “She has curly black hair and olive skin. Her features are stern, so angular they almost make her unattractive, but not quite. …At that moment I realize that he and the woman have the same nose— hooked, a little too big on her face but the right size on his. They also have the same strong jaw, distinct chin, spare upper lip, stick-out ears. Only her eyes are different— instead of blue, they are so dark they look black.”

Evelyn is a POC.

Naomi Watts is of British-Australian descent with blond hair and blue eyes. While she is an incredibly talented actress, the fact still remains that there are equally talented actresses of color who would have come closer to capturing Evelyn's physical description than Watts is. While it's not a white washing on the scale of casting Jackson Rathbone to play an Inuit character in The Last Airbender or Keanu Reeves to play a Japanese character in 47 Ronin, it's still another example of the perpetual problem Hollywood seems to have with being inclusive.

Usually, people of color don't typically make it to the main cast unless it's a period piece, such as The Help, or a so-called "minority movie" like any Tyler Perry film, but Evelyn is not a main character. Her storyline is integral, but she's still a relatively minor character compared to Tris or Four or even her husband Marcus. Her character arc in the book is not directly affected by her race, so why change it?

The franchise has already taken a step forward by casting Octavia Spencer in Insurgent as Johanna Reyes, the leader of Amity, but Watts is miscast as Evelyn. The fact that Four is biracial, that he looks like both of his parents and combines traits from both of his parents, was integral to his conflict in the novel. His arc could have been used to symbolize the struggle for acceptance and cultural harmony that biracial people face every day of their lives, but instead it's just another missed opportunity that fans can only appreciate by reading the novel.

Maybe one day Hollywood will finally stop whitewashing characters in their book-to-film adaptations, especially for no other reason than "just because". Today is clearly not that day.